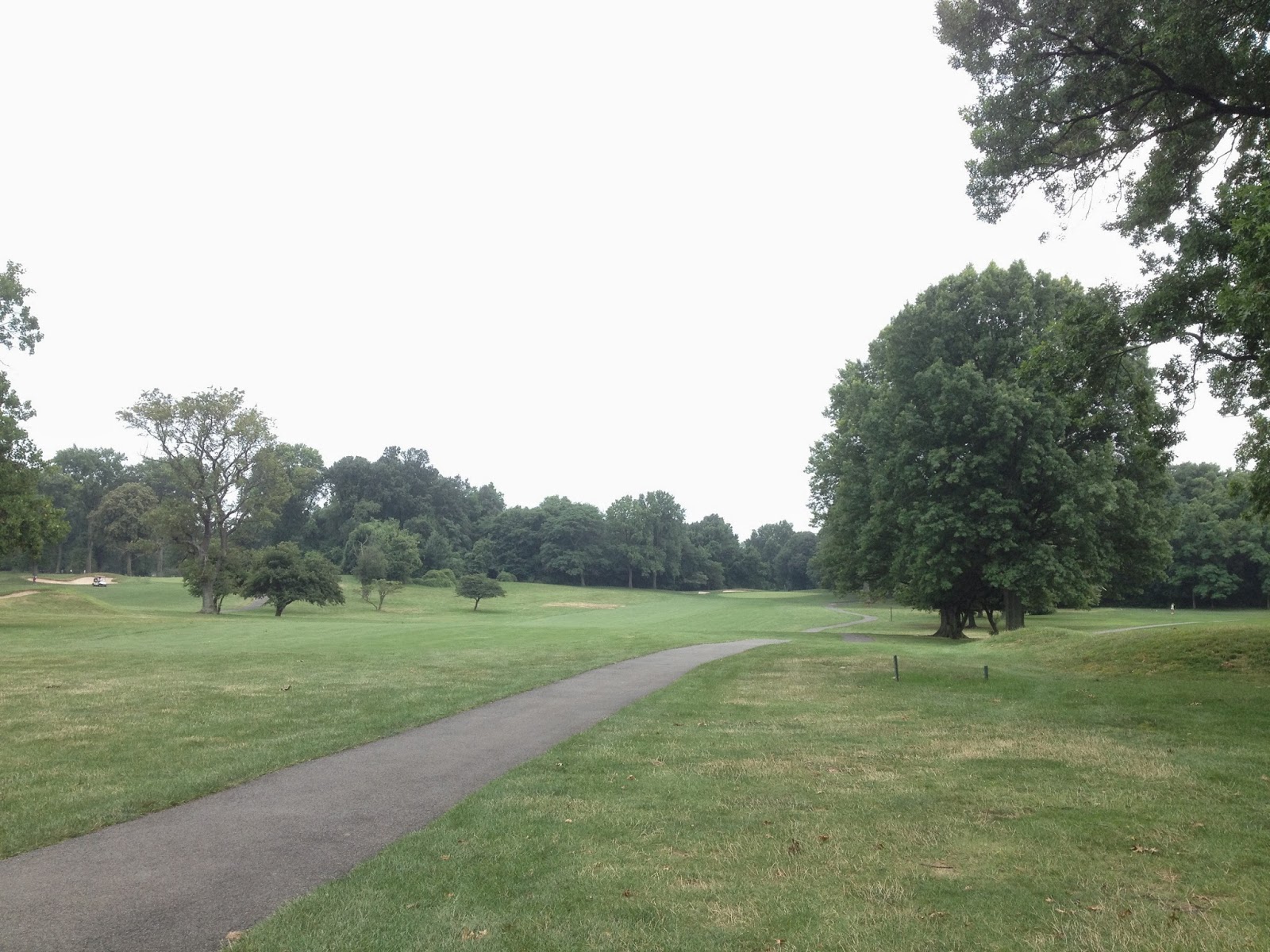 Okay, so normally I try to avoid weekend golf in the city. But this afternoon somehow boded well. I just had a feeling. A conjunction of some iffy weather and the big soccer final maybe. I called up the Dyker pro shop to make sure I could walk on as a single. He said I could. I asked if it was busy and he said it wasn't. I strained to hear any deception in his voice and decided it was worth a try.


I used to be such a regular here, but in 2014 things have changed. It's been exactly a month since I played here. 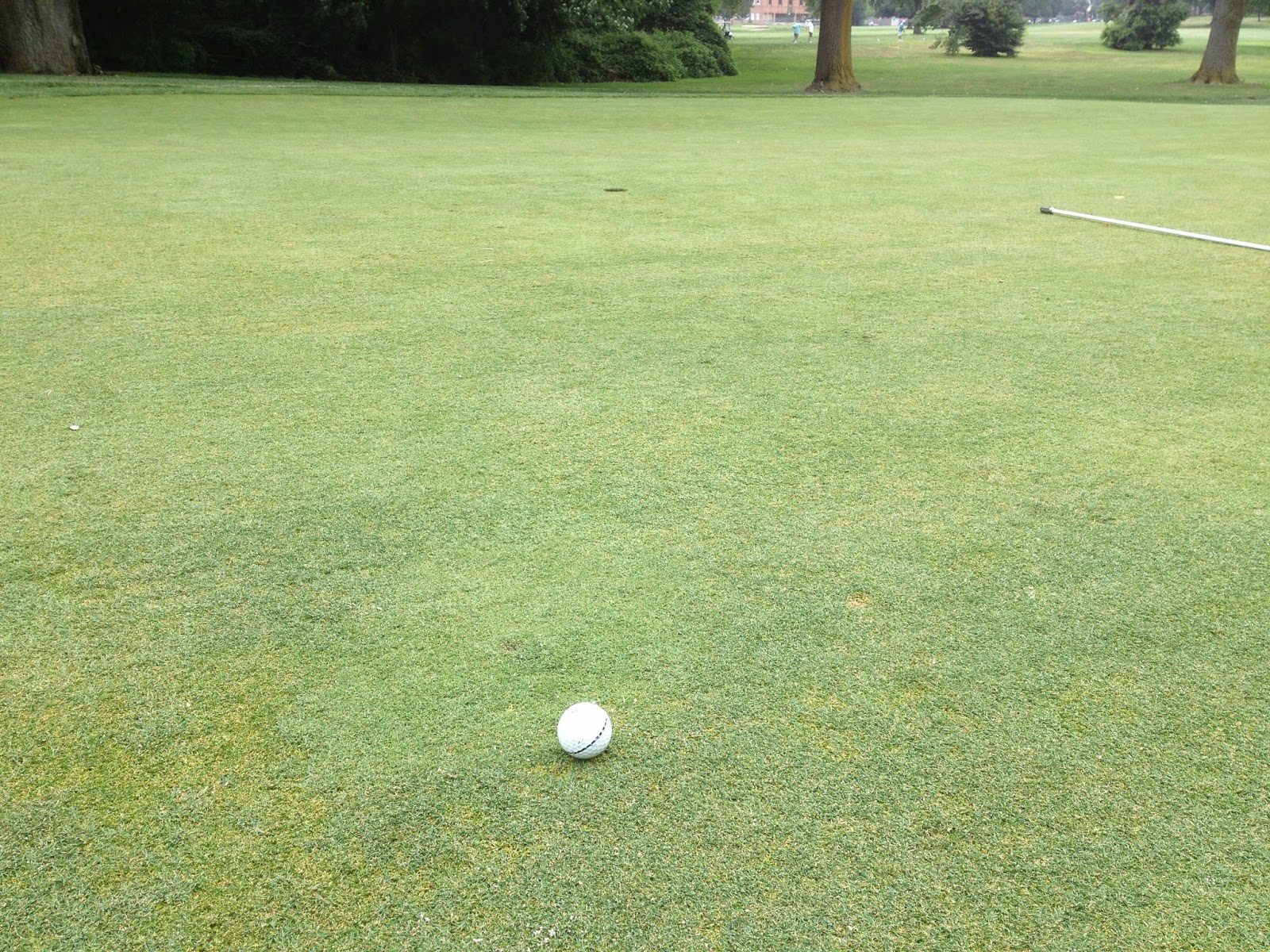 Surprised to see the greens looking kind of dismal. 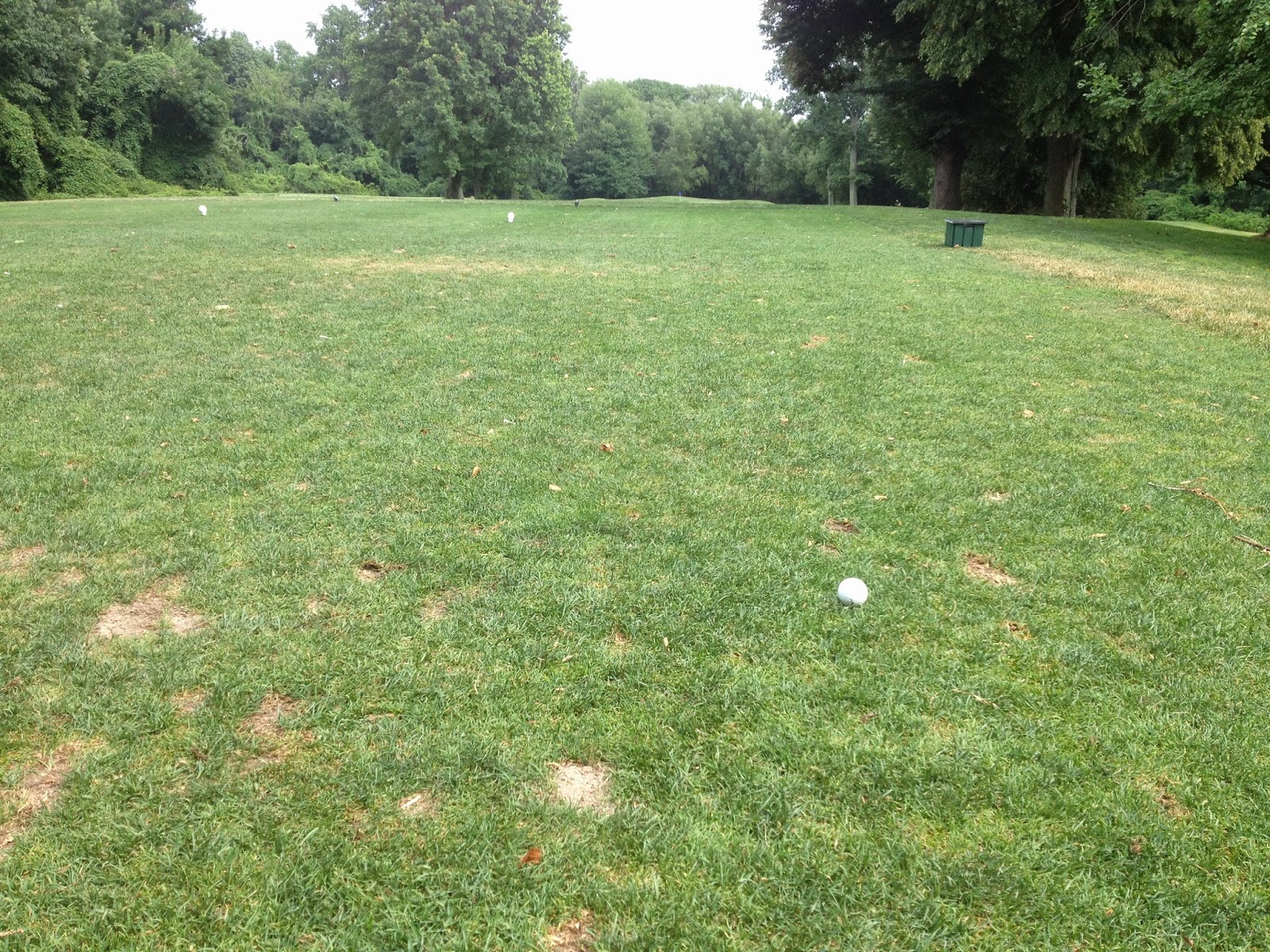 Looks rather crappy and unkempt in a lot of places. I don't remember all these bald spots being here a month ago. 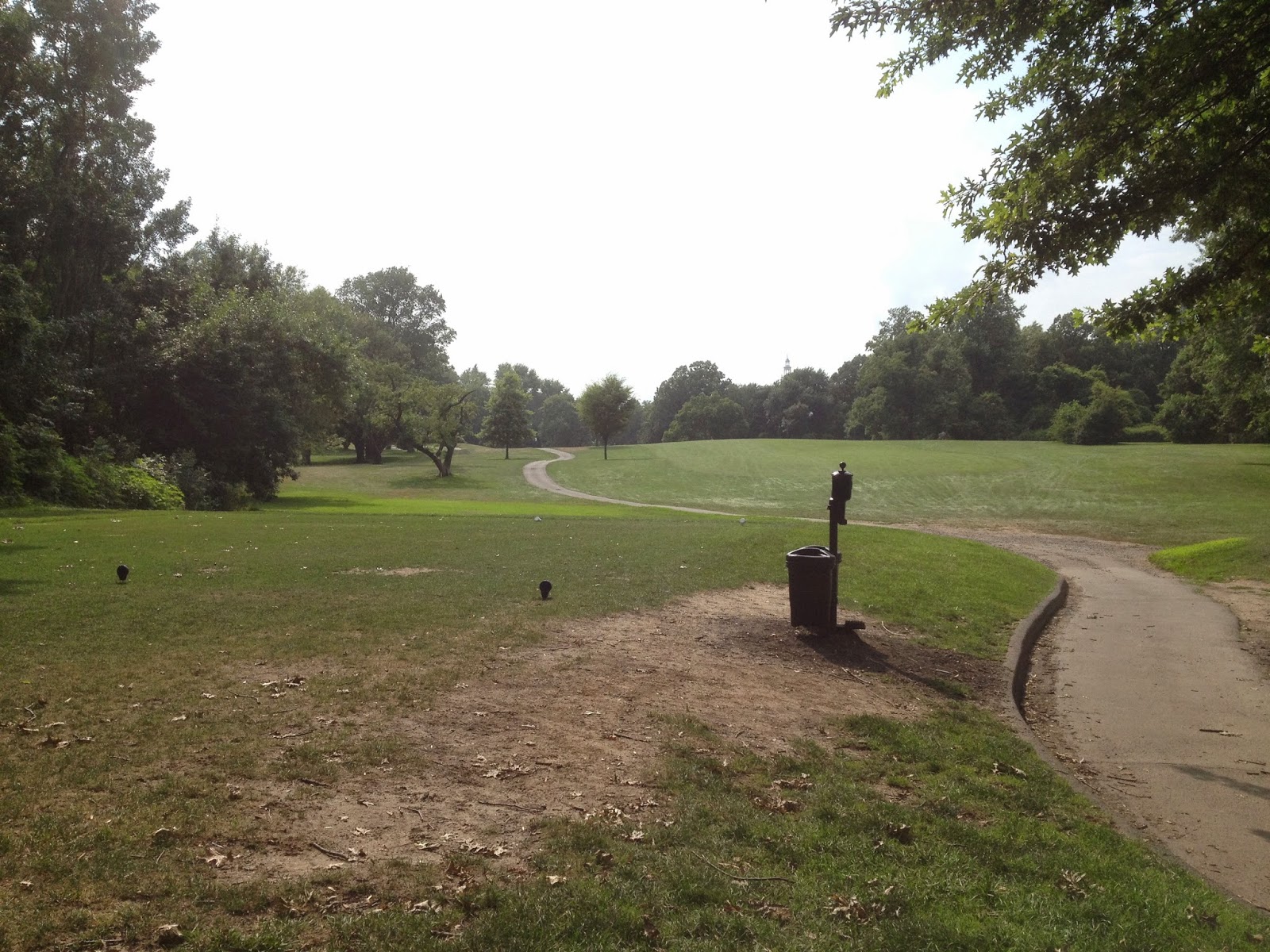 Downright urban decay at #3 (still etched in my mind as the fifth hole). Still one of my favorite holes in New York City. A perfect tee shot is a field goal through the two young trees that flank the cartpath. 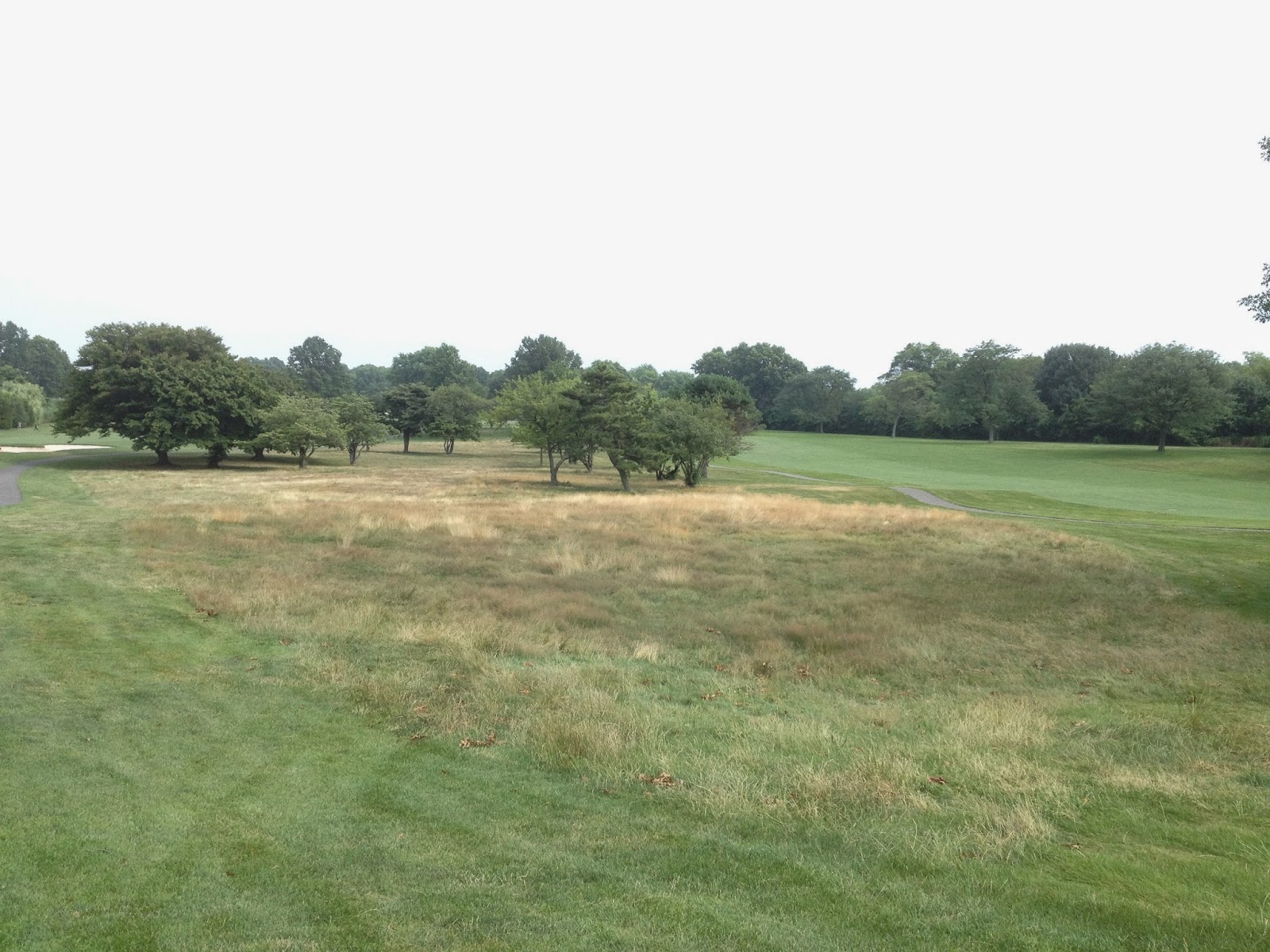 Oh, hello there wild-looking fescue. In the month that I've been away a new feature has been added evidently. Only the worst of shots would end up here, so it doesn't add much in the way of challenge but aesthetically it's a tiny step forward. 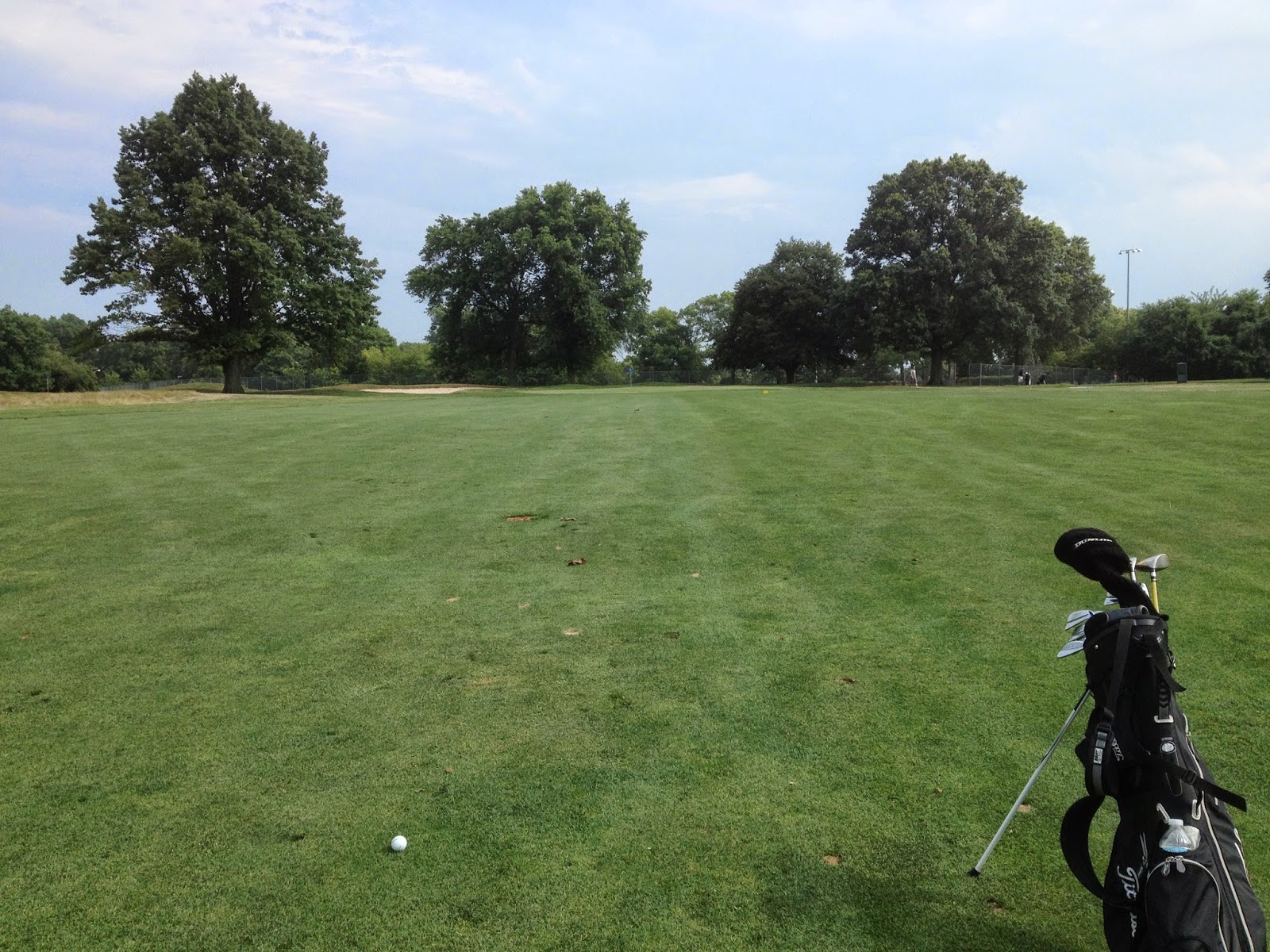 Approaching the par 5 5th. Walking up this fairway it feels good to be back here after a month away. In terms of atmosphere and natural appeal, Dyker might be the best golf land in the city. Not the course necessarily, but just talking overall environment. 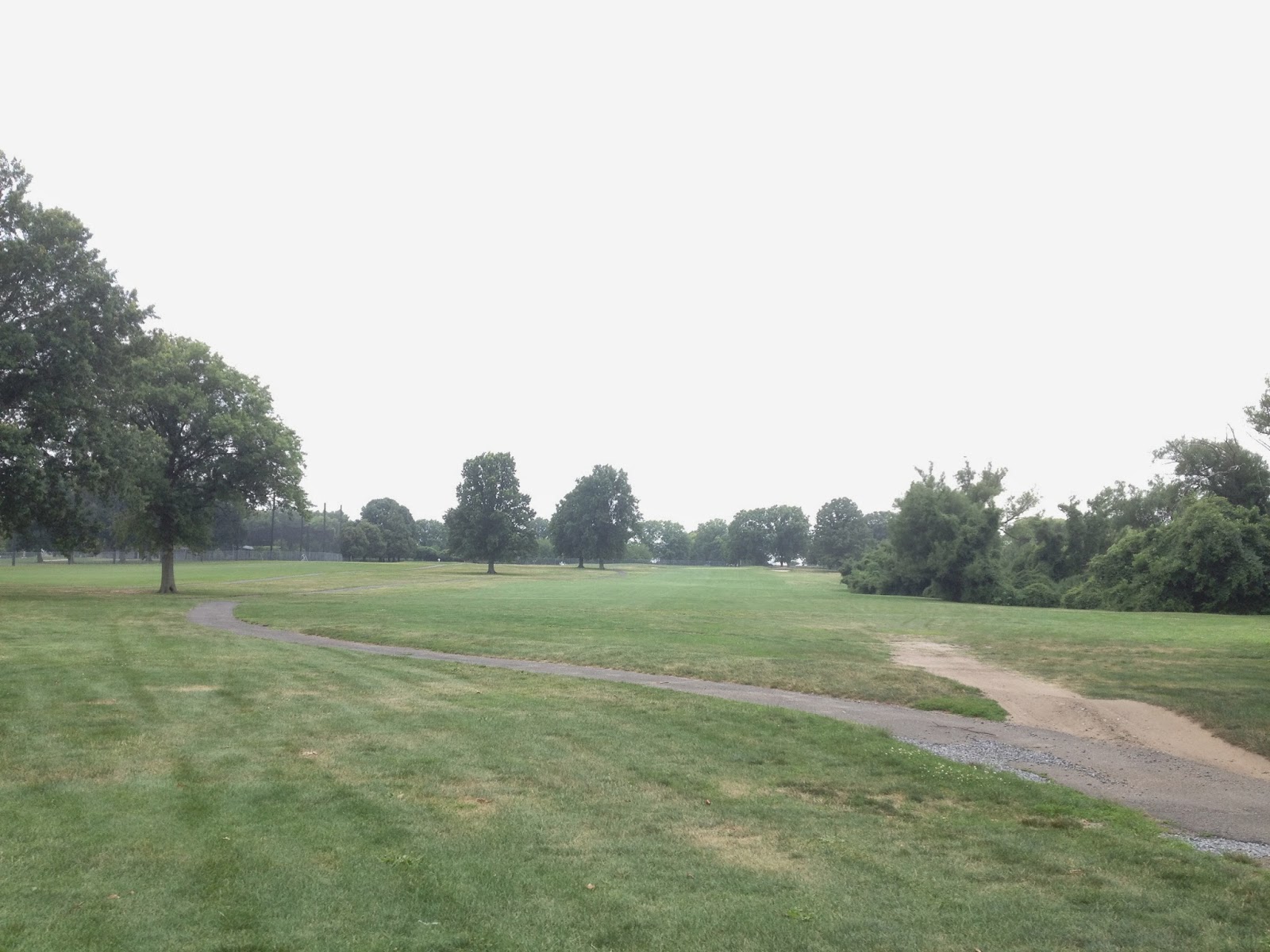 Marine Park is too windy and exposed. Split Rock a little too woodsy (i.e. too many bugs). Silver Lake is alright but it's tiny and cramped. The courses in Queens are all kind of dull, plus they're in Queens. Dyker is probably the most serene and pacifying, the city course you're most likely to have moments where you're like, 'Hey, kind of nice being outside.' Like a walk in the park if you will. 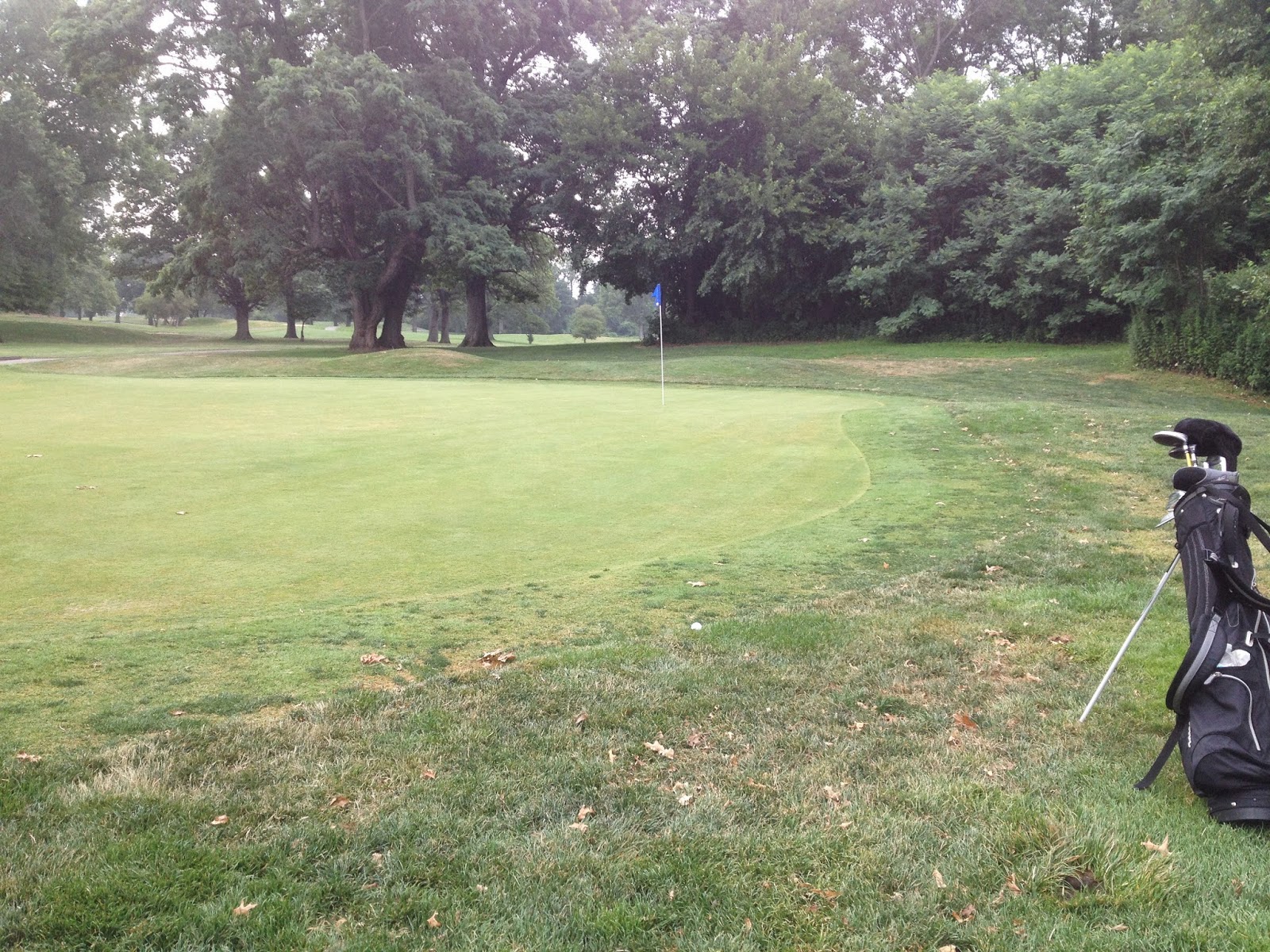 Something's definitely wonky with the grass though. Rainfall's been sort of low lately, but not exactly a drought. Not but a couple months ago the rough here was deep green, super thick and lush. But now I see much brown and tan. No idea if it's from sickness or lack of water or whatever. Probably safe to say it's somehow management-related. Normally I hesitate to criticize a business from my worldwide bully pulpit, but this one is run by the "American Golf Corporation" so who cares. The word corporation is in the name, nuff said. 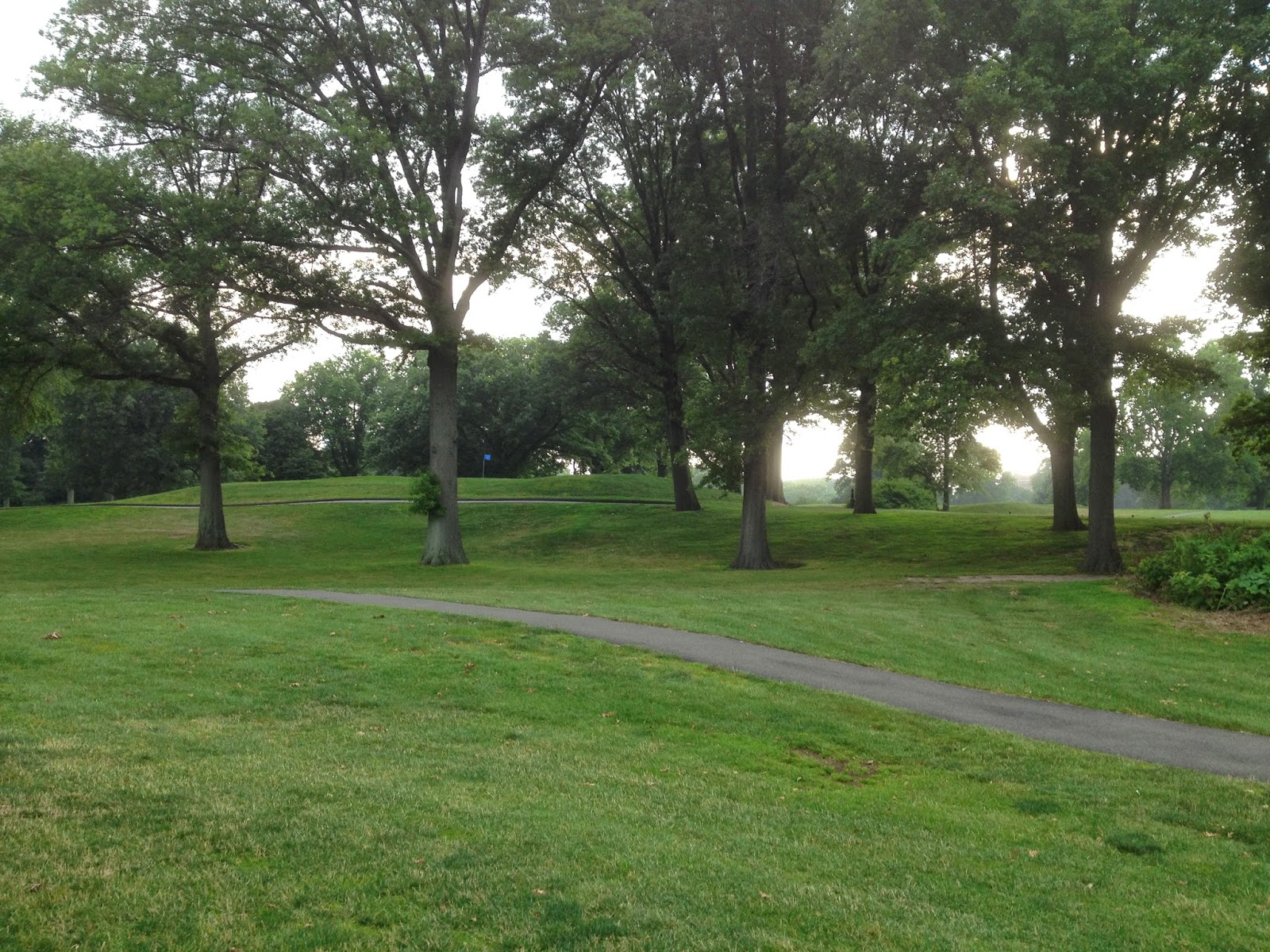 Good outing. Played mostly by myself. I joined a twosome for a spell; they quit after nine. I glided through the course like a ghost, in a little over three action-packed hours. 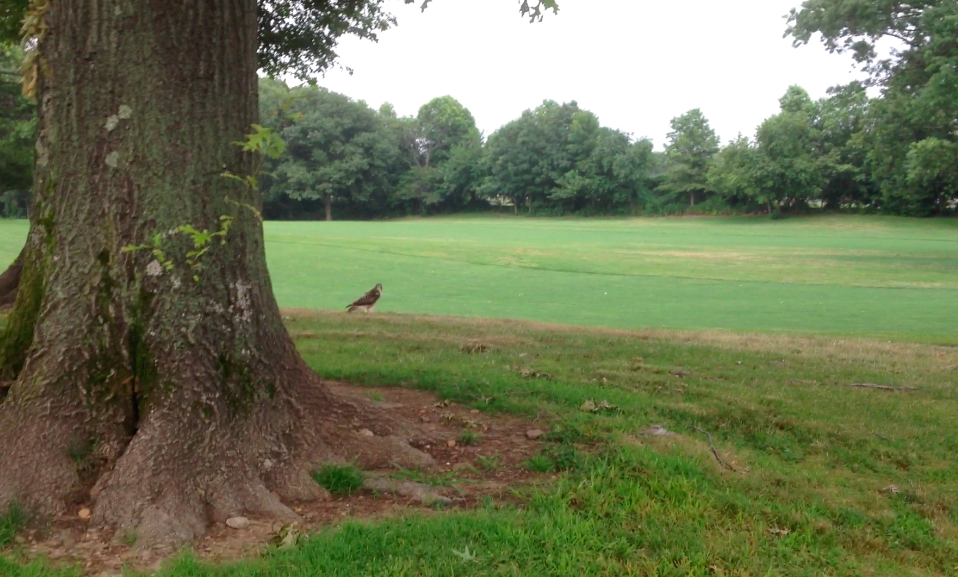 Not really sure if it was really on account of that World Cup final, but it was rather empty out there for a Sunday. I came up fairly close to a red-tailed hawk just sort of standing there chilling. 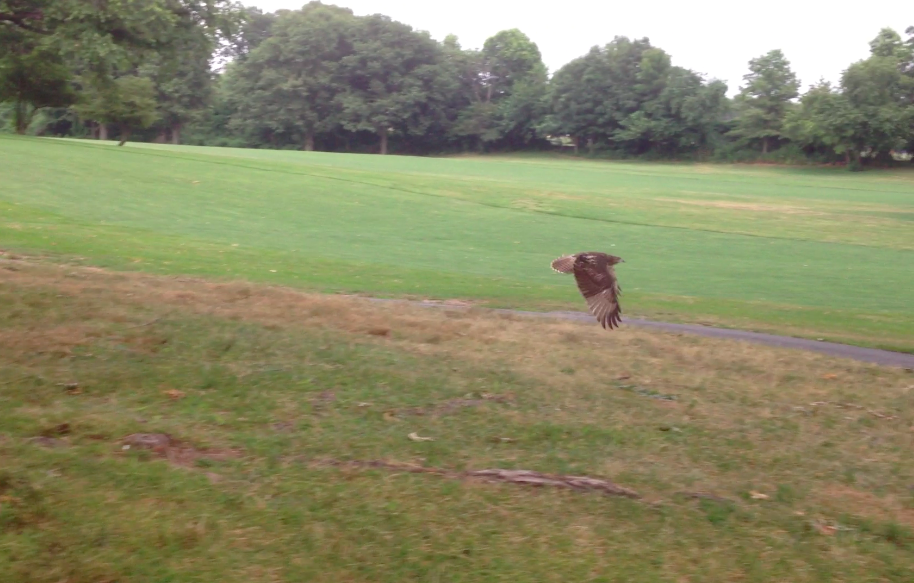 Managed to get the camera out and behold the majestic beast, terror from above, bane of all rodents, before it had enough of my skulking around and took off. Also look, there's more burned out turf.

I had a fun round, a satisfying cocktail of sweet highs and some bitter and sour notes. I started out with a 40 and swelling optimism, but then pissed away an opportunity for a low round of the year by hacking up a back nine 44. Towards the end I faded a little in the humidity, cart-riding legs no longer used to walking and carrying 18. A couple short putts were missed due to lazy negligence. I left the course really annoyed about the 44. Could've swore I played really good in spots.

While the numbers might not bear out any huge improvement yet, you gotta trust me on this, I have intangibles dammit. Things feel different. I'm not in a slumping state of mind anymore. I'll leave you with a quote. It's not mine, actually it's Phil Mickelson talking to the press at Hoylake, England this week. (See, this blog covers events outside of Brooklyn too.) But dammit if it did not sound exactly like what some grinding teen handicapper might say.


Normally I would be discouraged or frustrated, but I'm just not. I'm not frustrated, and I'm not discouraged. I feel like I've had some good breakthroughs in some areas. I haven't had the results, I know I haven't played well. But the parts feel a lot better than the whole right now. I don't know when it will all click together. I don't know if it will be this week, in three weeks, but I feel like it's really close to being good.
Posted by Legitimate Golf at 9:48 PM