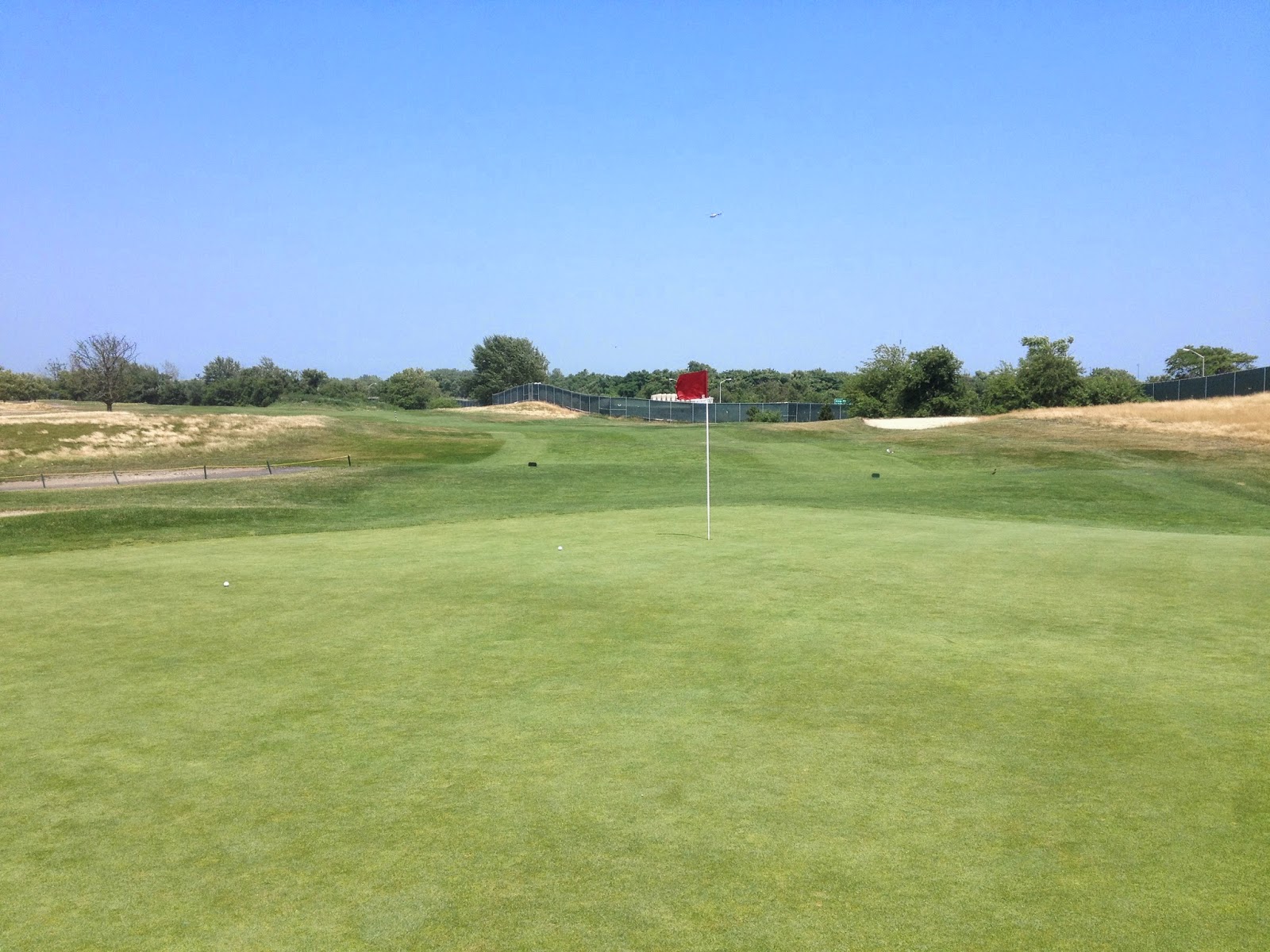 We are within a few days of the big tourney and I am pretty excited for it. Like rip roaring, let me at em, chest punching, forehead vein popping, gratuitous foul language spewing, ready to tee off right this goddamn instant excited. So naturally I was pumped to get in this one last practice round.


I scored a tee-time deal that included cart, but oftentimes if I'm forced to share I'll just opt out and walk. Today was another such situation, this time with an annoying nebbishy guy, same guy who was in my group and annoyed the crap out of everyone the last time out here. First thought naturally was to bail out, but because of 1) the heat, and B) the prospect of a similar scenario in the tournament (I'll be riding most likely) I decided to suck it up and get behind the wheel.

I realize now that slow players are diverse as humanity itself and that there are innumerable causes of the nuisance. In this case it was something I hadn't quite encountered before, an exceptional self-absorption in one's own scorecard--the guy would scribble detailed notes about every single goddamn stroke. He would pace off putts--but only after holing out, while everyone else walked off the green. Then he'd plop down in the cart and get to work with the pencil. I glanced at the card; every blank space was being used. It looked like calculus homework.

I thought of sneaking a photo of all this ridiculous notekeeping and trying to embarrass the guy in front of the whole world wide web, but I just couldn't bring myself to. I don't think that I want to be that guy. (I understand that misanthropy/strained human relations are a major part of the appeal of this blog, so sorry about that.)

Towards the end I had enough and decided to confront him about slow play. I was going to ask if he had ever heard of the term "ready golf", if he had noticed that he was always the last person on every tee box, and that the foursome in front had left us in the dust a while ago. But right before that could happen, I noticed he was attempting to stretch out an aching back in between shots, going so far as to employ a baseball to try and massage out the stiffness. It was mildly pitiful and after seeing that I lost the steam to go through with it. I was still annoyed but it's tough to speak out when the animosity is no longer coming from the pit of your soul. Anyways who cares. Why bother.

Call it apathy, call it futility; or maybe it's just maturity. Reflecting on it afterwards I think I was probably better off just trying to lead by example, displaying expedient golf through actions. After all I was the ready-golf engine of our whole foursome: first on every tee-box and a ruthlessly efficient cart-operator. Even though we got dusted by the group ahead, we still finished in less than 4:20--exceptional pace for Marine Park and let's face it, all thanks to my tireless pulling. Towards the end I noticed my cart-mate had figured out that you can jump in the cart while still clutching your clubs, that you can put them back in the bag at your next stop, and that all this saves time. So perhaps I had effected a tiny change after all, and it didn't require being a pushy prick.

Anyways this sad nonsense has grown tiresome. Let's talk about some tournament prep! To get a feel for what I'll face Monday, I teed off from the whites. 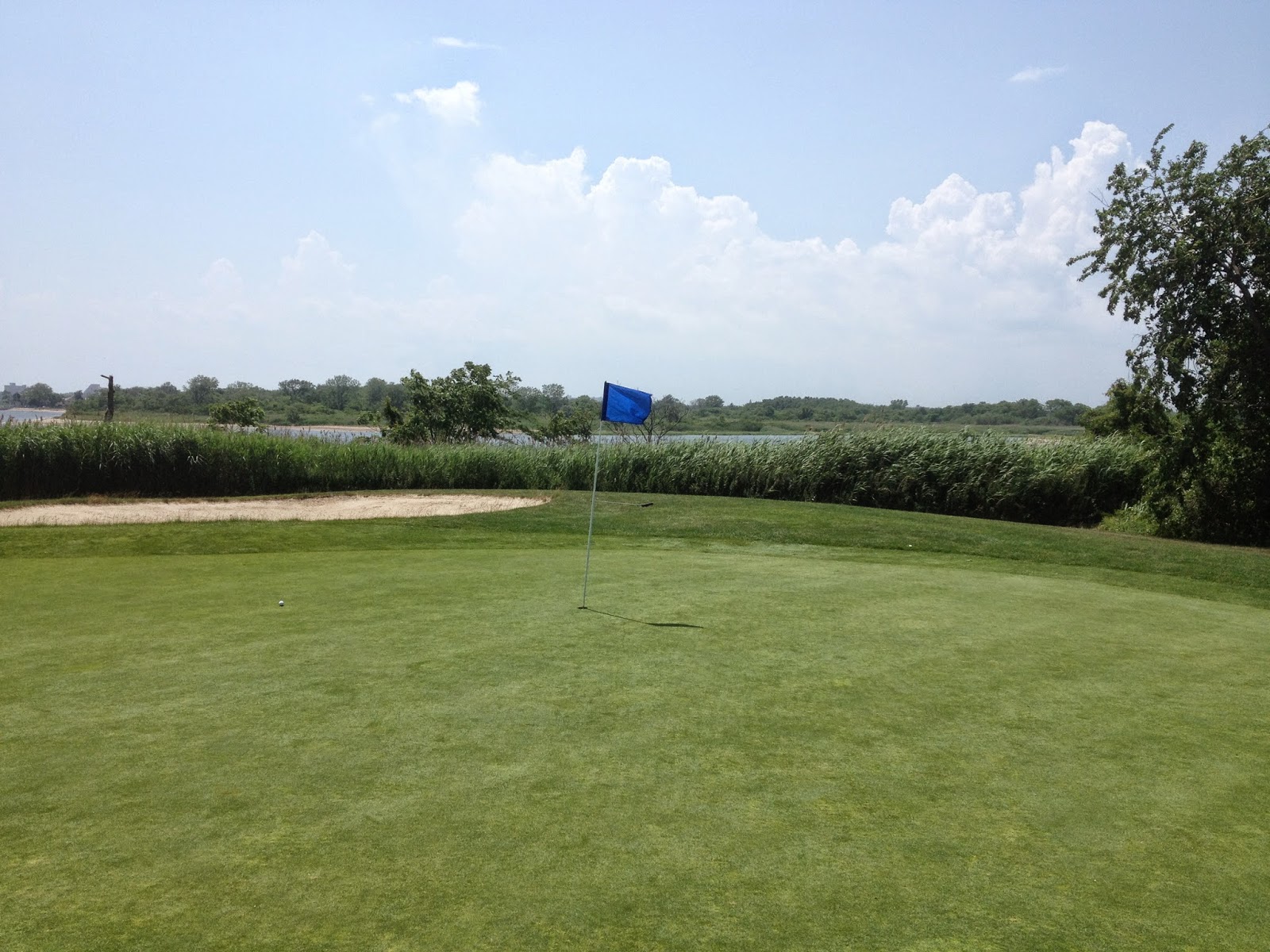 The wind was unreal today. A constant whoosh in the ears all freakin' day. There were times where it was impossible to wear a hat, or even just to stand stock-still. Some gusts were strong enough to nudge a parked cart forward a little.

All the downwind holes played extremely short. I was hitting approaches from some funny places. I'm accustomed to playing the blues here so the whites, at 400 yards closer to the hole feel like a different, easier course. I shot an 85 that was decently satisfying. Actually it's my best score here in a long time and gives me some confidence going into Monday. 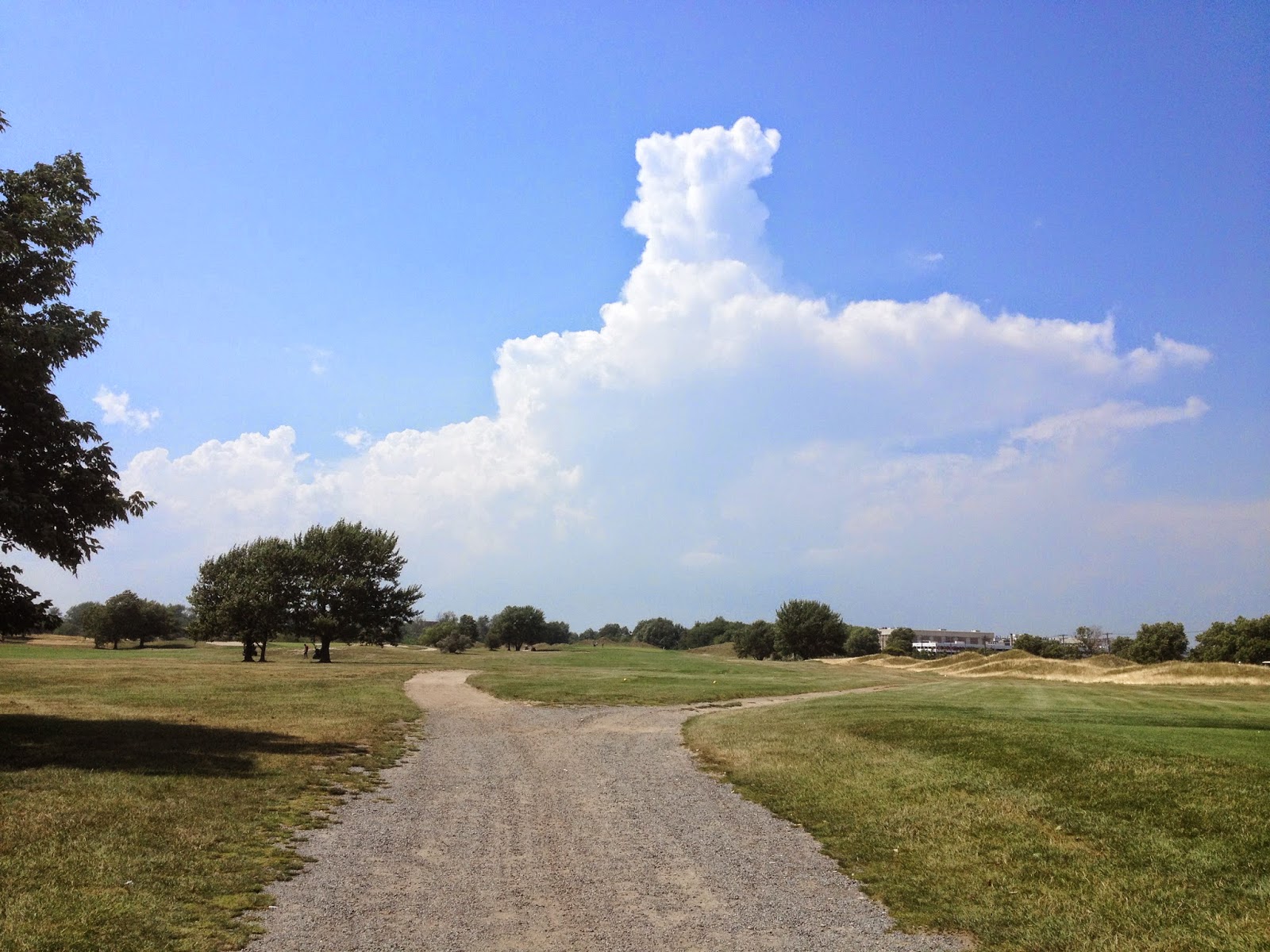 For the last week or so I've been watching the forecast take shape, and now we're near enough to take it serious. It will be around 90℉, with humidity and high winds--basically a perfect shit-storm of lousy east coast golf weather. This is about as bad as weather could get while still being golfable and frankly this fills me with some gladness as I believe the conditions will give me an advantage over the other 'teen handicappers.

Right now I'm at a lean fighting weight and feeling as fit as ever having been training (and eating) pretty hard lately. (Not necessarily for this event per se, just a compulsive exerciser.) The old mental health seems okay as well--that I could shoot a half-decent score in ridiculous gusty conditions while having some fun doing it indicates that I'm in a far better place than I was a few months ago, when I was sweating and cursing my way around the course, repeatedly asking "Why?" to no one in particular. 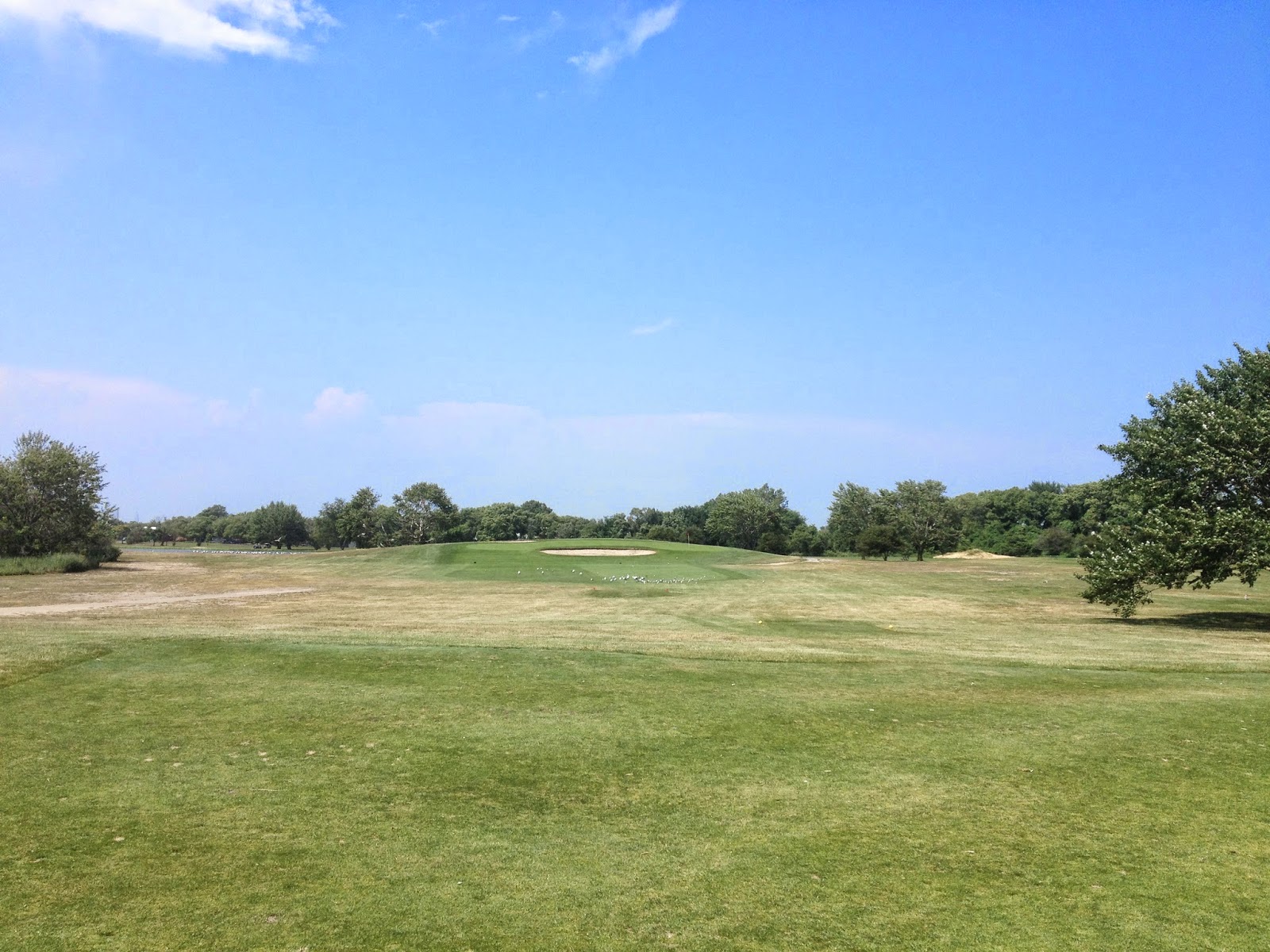 I believe this tournament will be a war of attrition. A contest not of who can play the best top-flight golf, but of who can emerge the least wrecked by the conditions. Hot sun, high UV-index and hell-on-earth humidity will make for sheer physical discomfort, while a combo platter of gusty winds, fast greens and sloped hole locations will make for some frustrating, ball-busting gameplay. I predict that on the whole, scores will be high. That also favors me, I think, because when it comes to shooting higher scores than you expect, and them accepting them with grace and composure, I am sort of an expert. 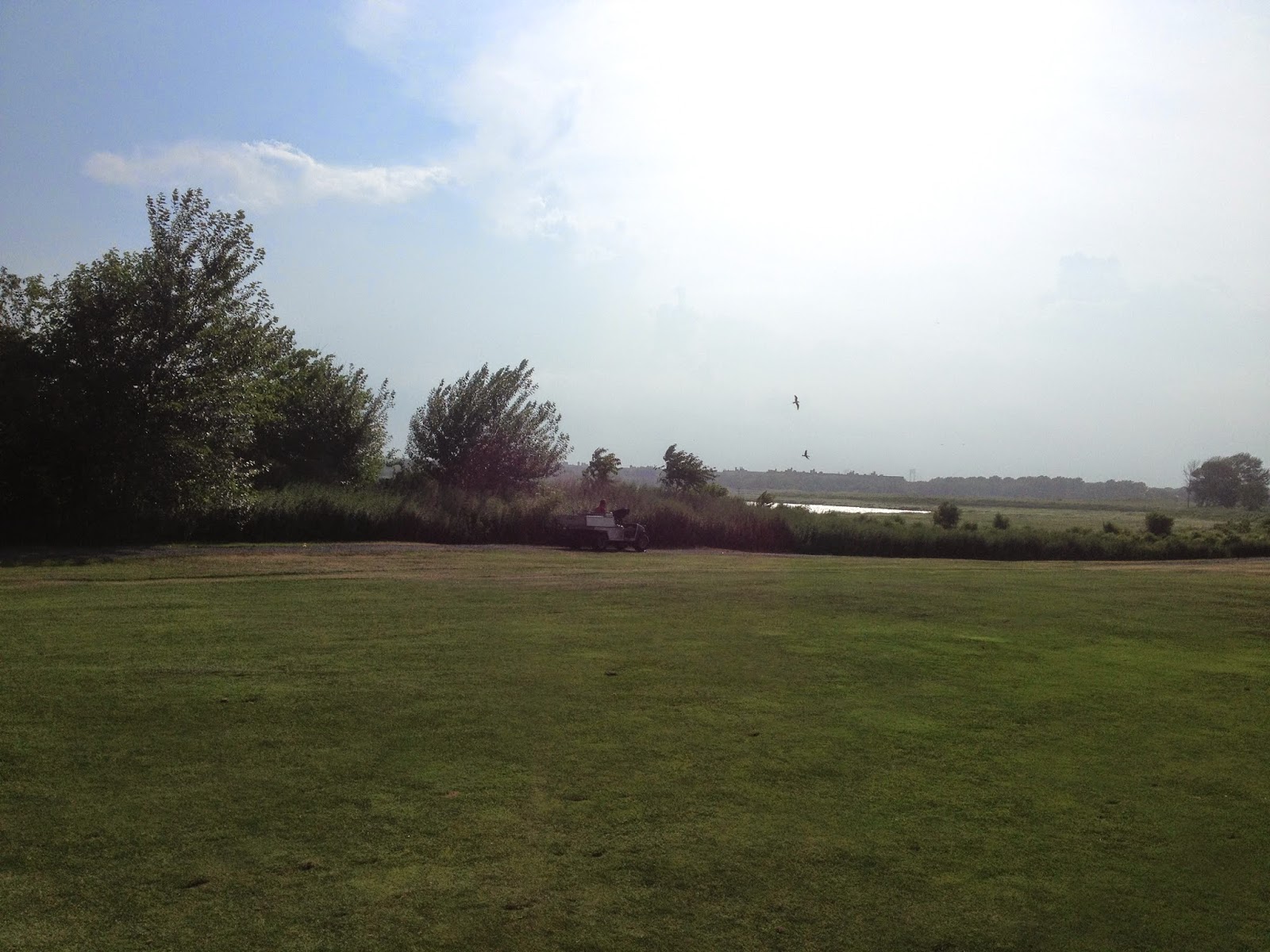 Between now and Monday I'll hit some range balls, practice putting and do a bunch of stretching. I don't have much planned for the holiday weekend so look for a couple more exciting pre-tourney updates.
Posted by Legitimate Golf at 1:15 PM