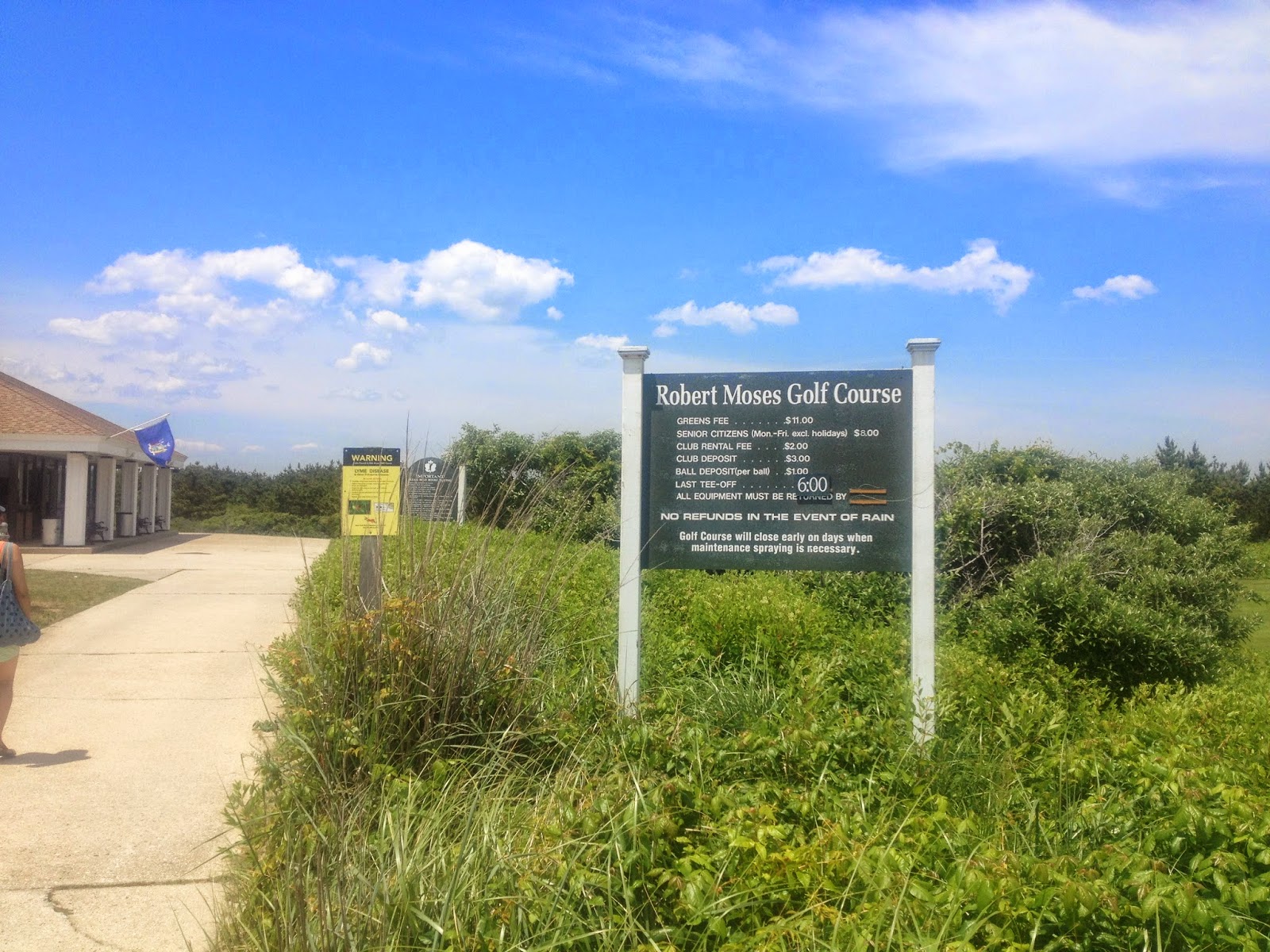 Time to take a break from all the hand wringing and tournament prepping and experience some golf in the way it was probably originally meant to be enjoyed--by the seaside and with some good company. 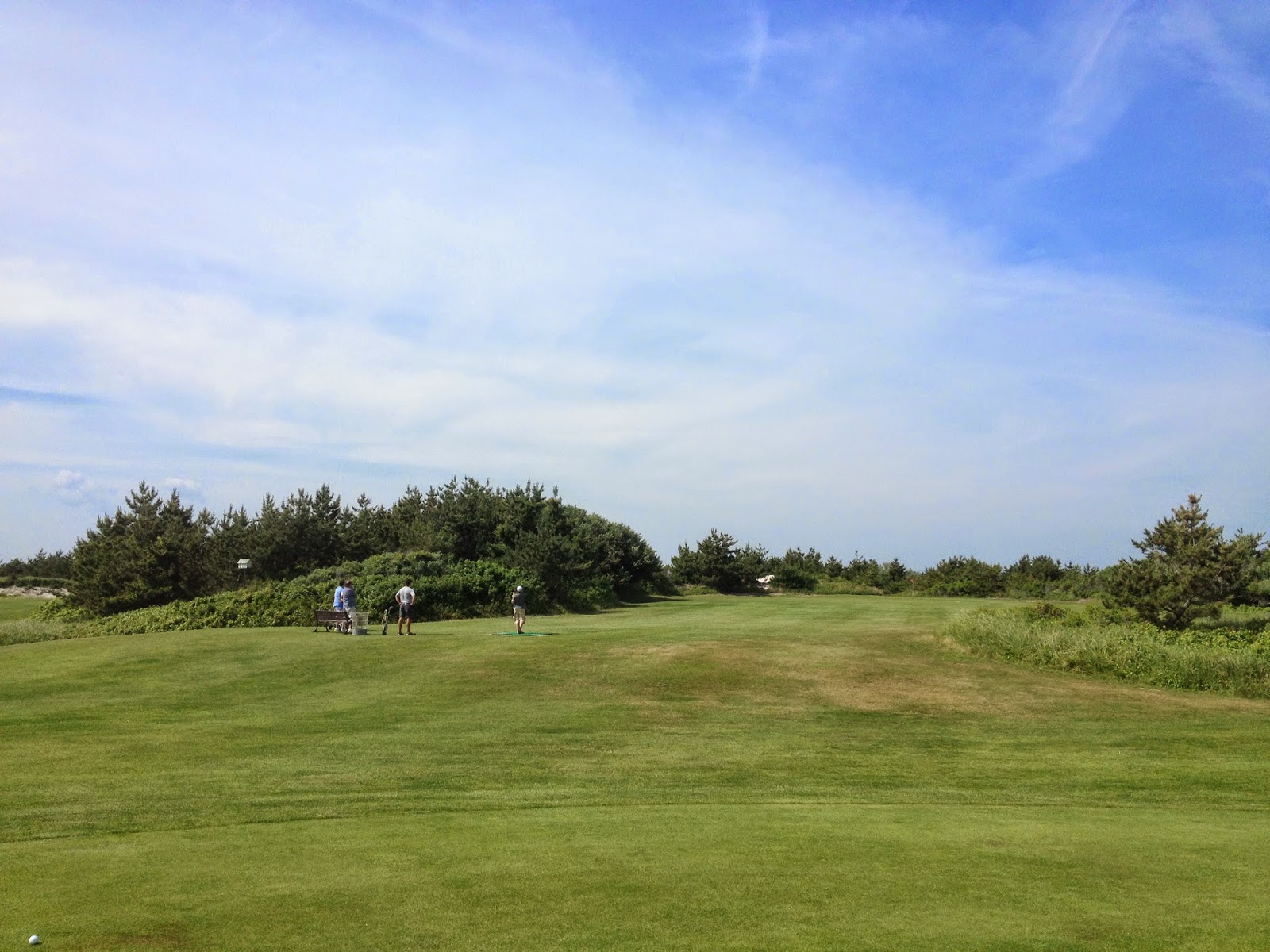 Ms. L and I tried to come here a few weekends ago but ended up getting detoured, to Cedar Beach just a little farther down the island. That turned out to be a nice find, but still I was glad to be back on these dunes again. 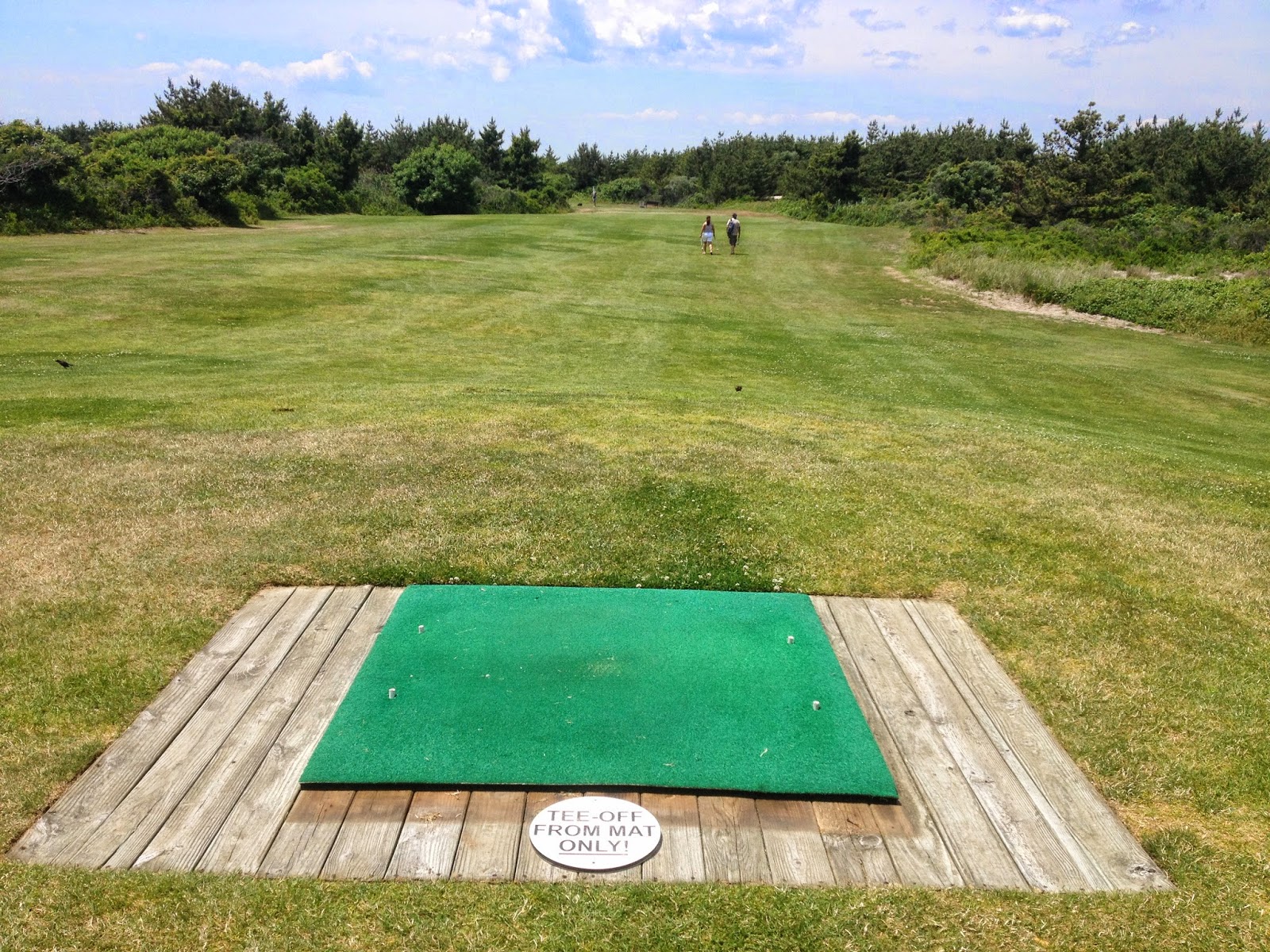 We've been coming here for a few years now and both of us enjoy the hell out of it every single time out. It's really a special place. Tucked away on an obscure end of an already little-known beach, it's kind of a local secret. Chances are, you'll never set foot here. And that makes it cool, if you ask me! No offense! 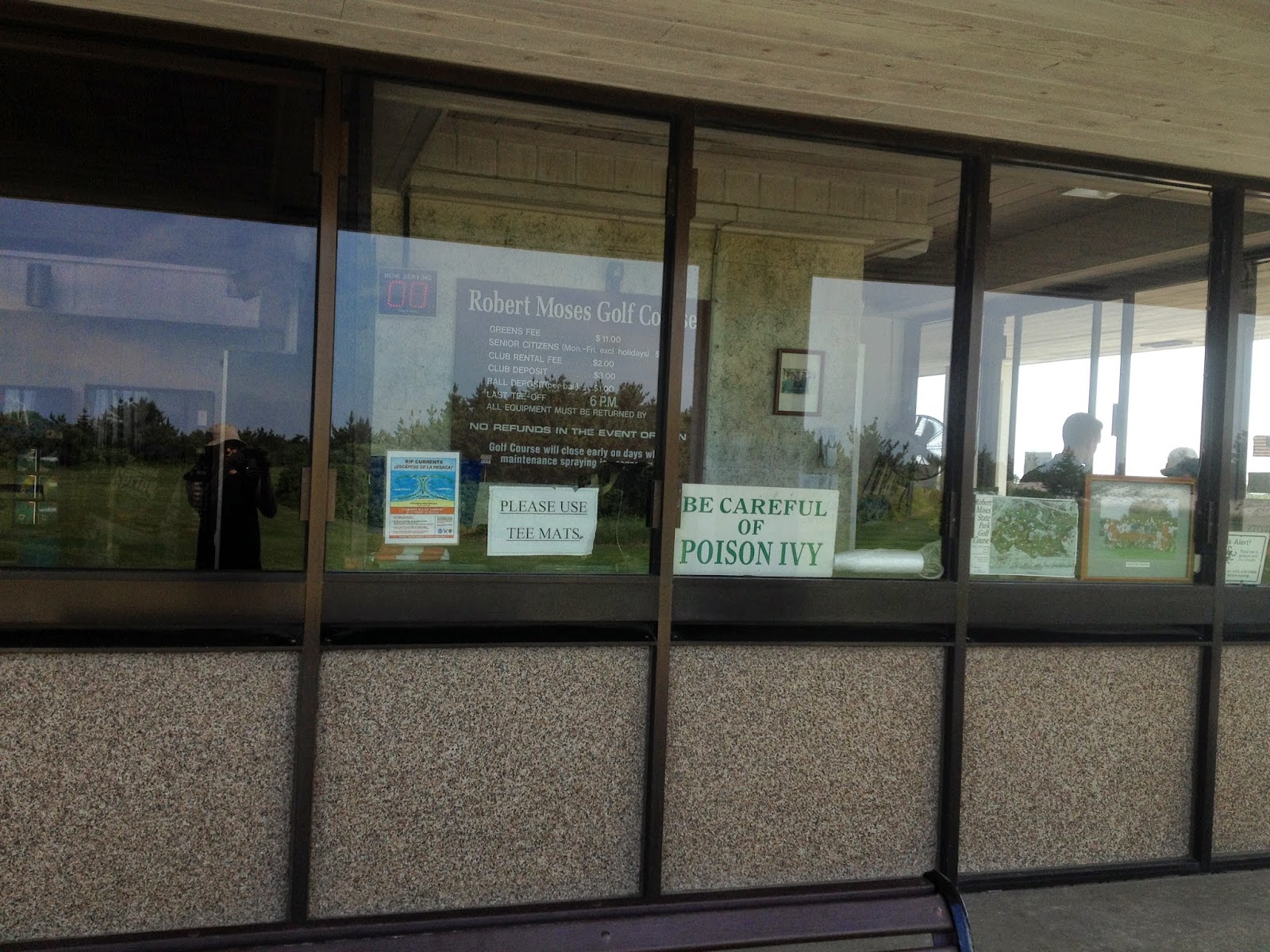 Like Cedar Beach, RMGC is pretty much frozen in time, a simpler time, at an era in which golf for the people was considered vital and cutting-edge recreation. Sure enough there are no concessions to modern millennium life here whatsoever. Vending machines that take paper money--that's the most modern thing they got here. They take credit cards, but it takes a couple minutes to get the decrepit analog card reader and telephone line working. Ah, it really takes you back. 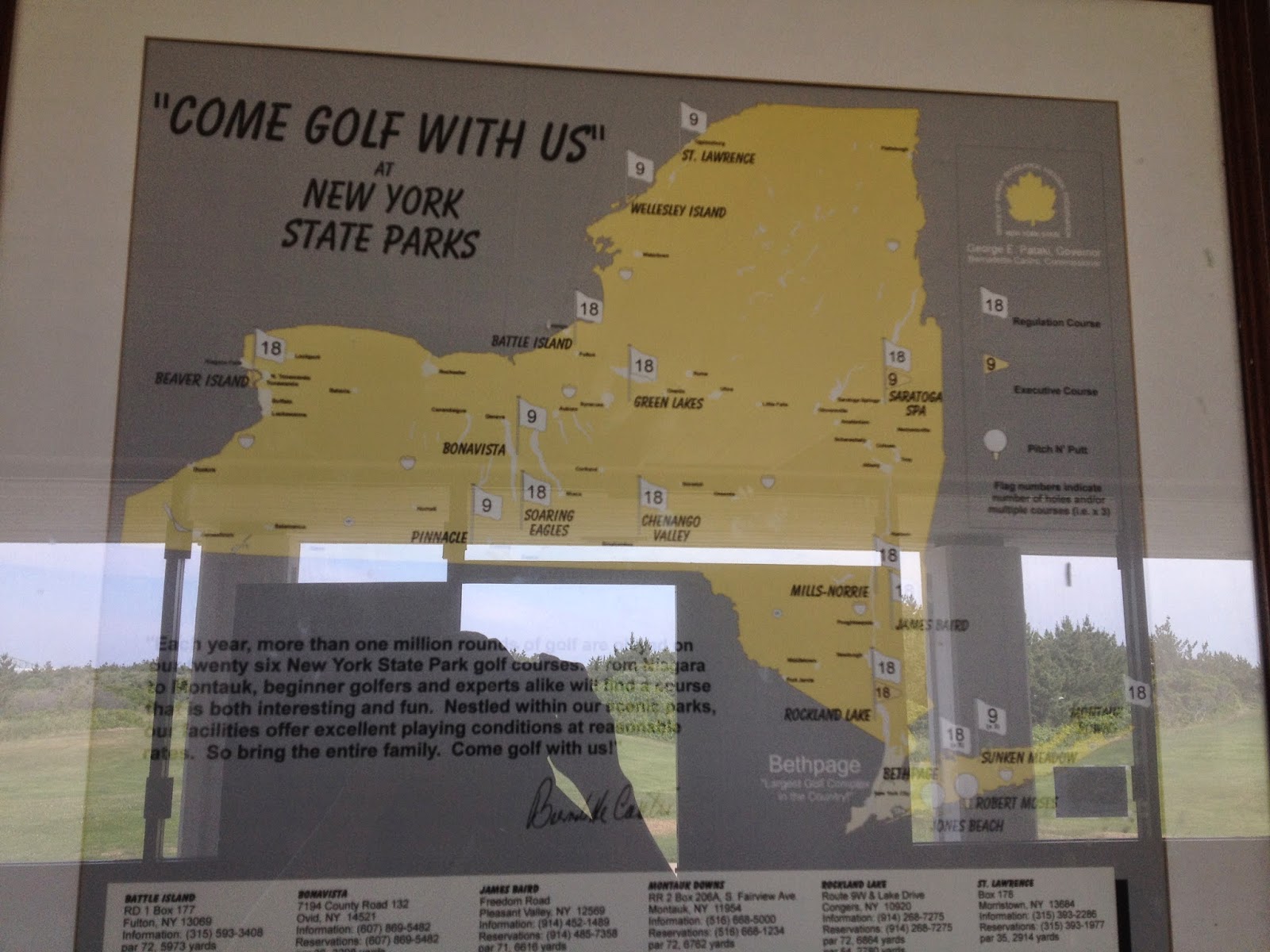 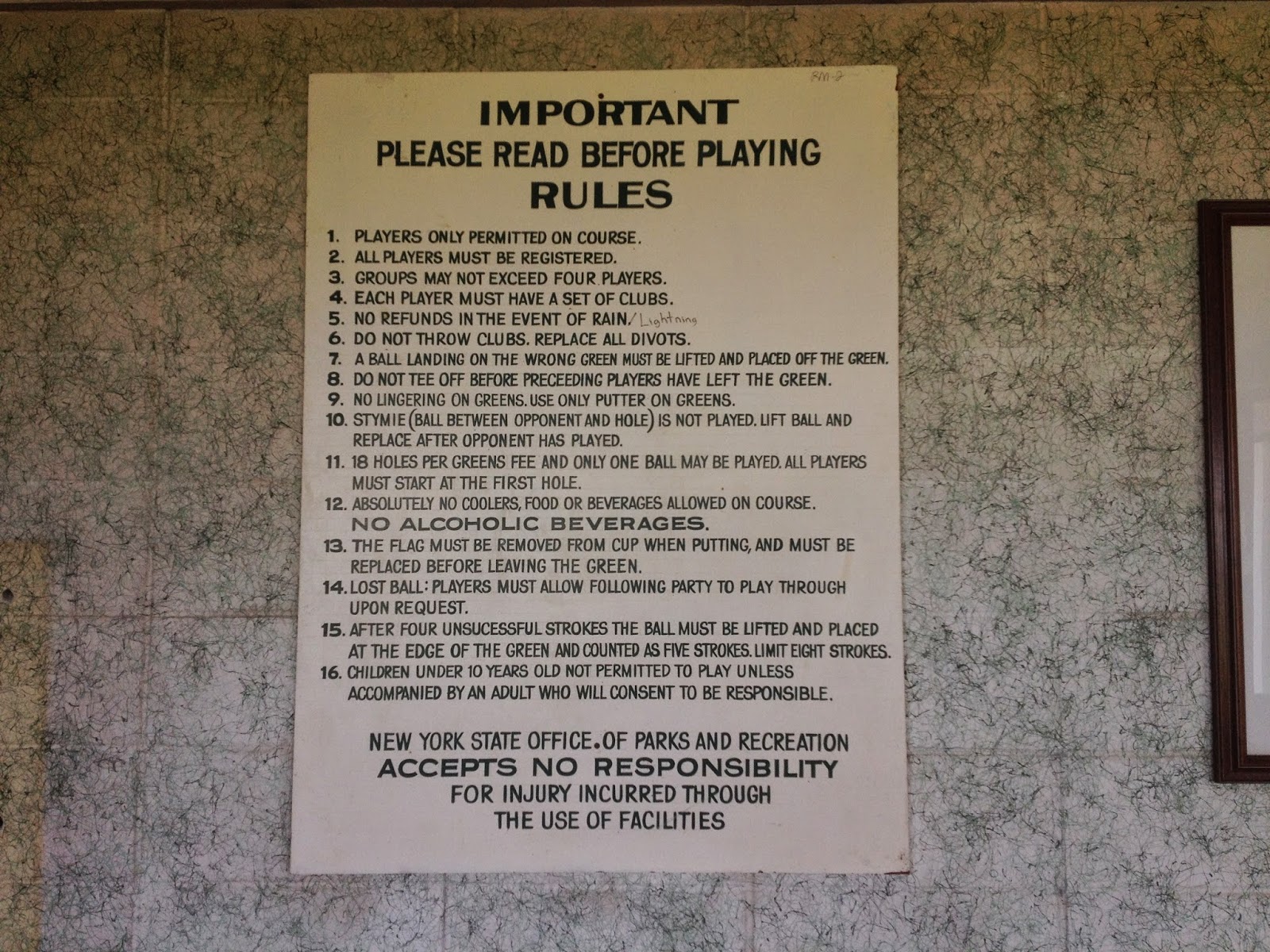 As a relic of a more innocent era, a place like this feels increasingly out of step with the world. 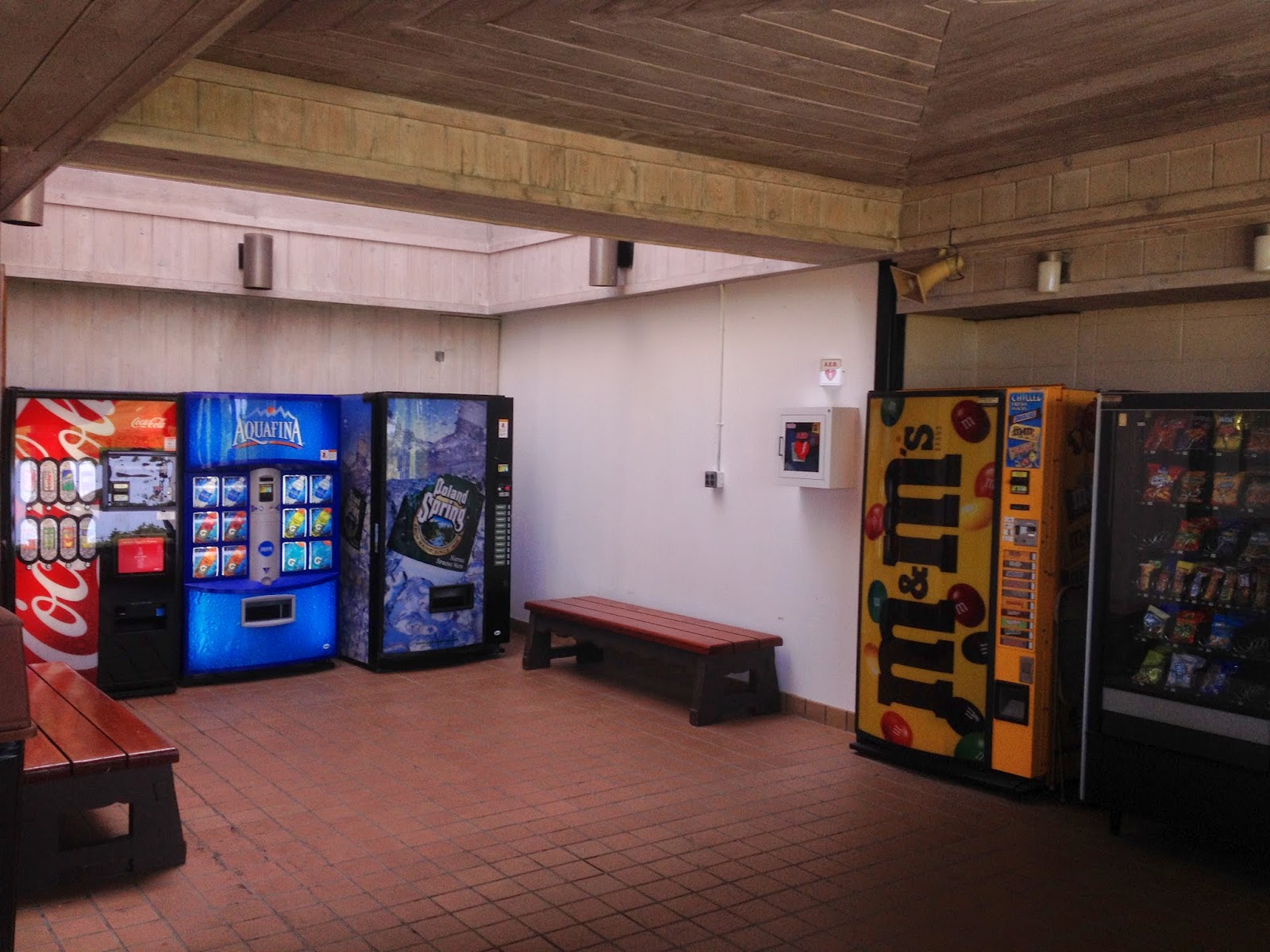 The space-age, fully automated snack bar. Laugh if you must but seriously this setup beats a lot of places I've been to in terms of selection. 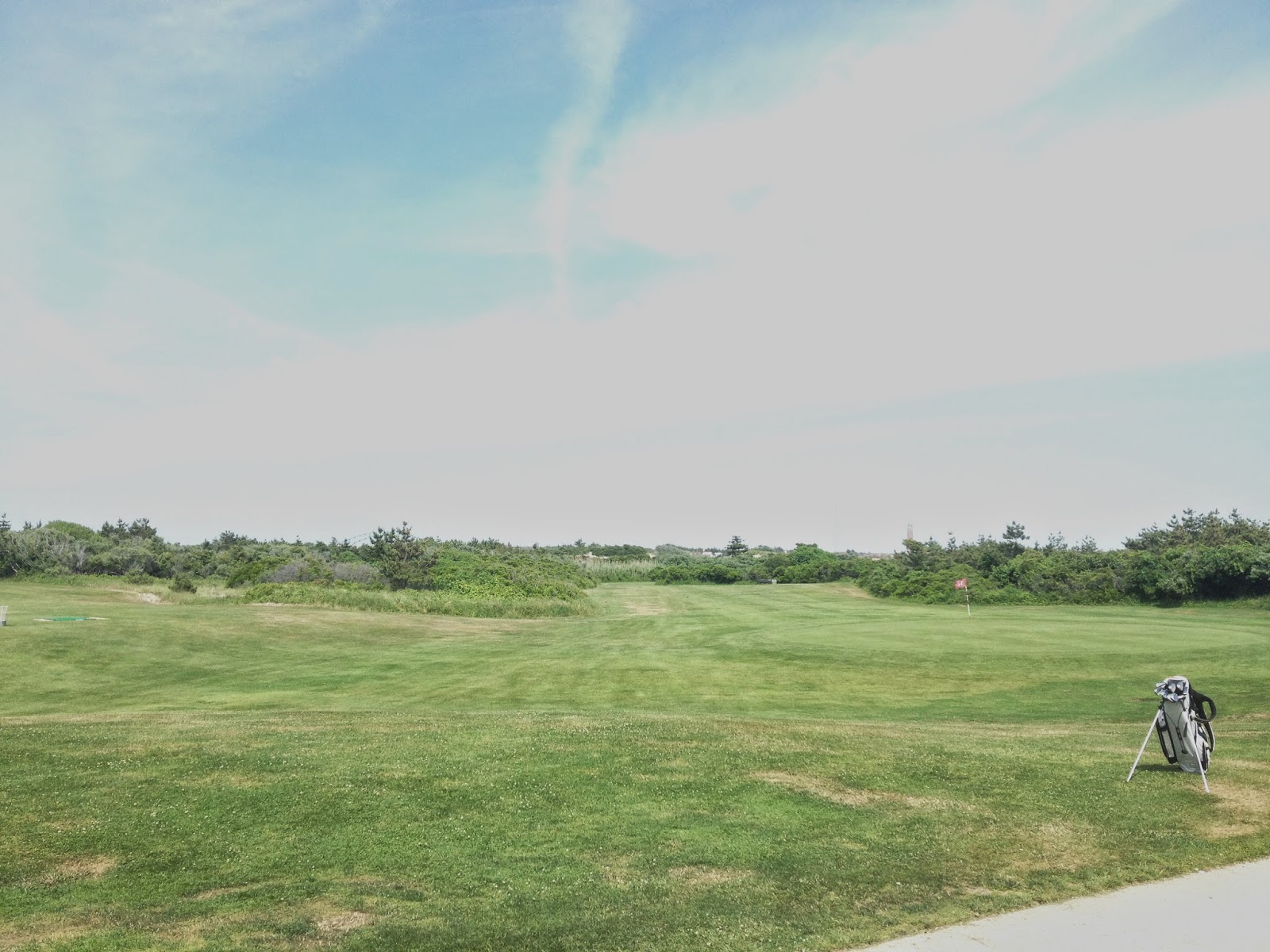 Sweeping view of the back nine from the clubhouse. 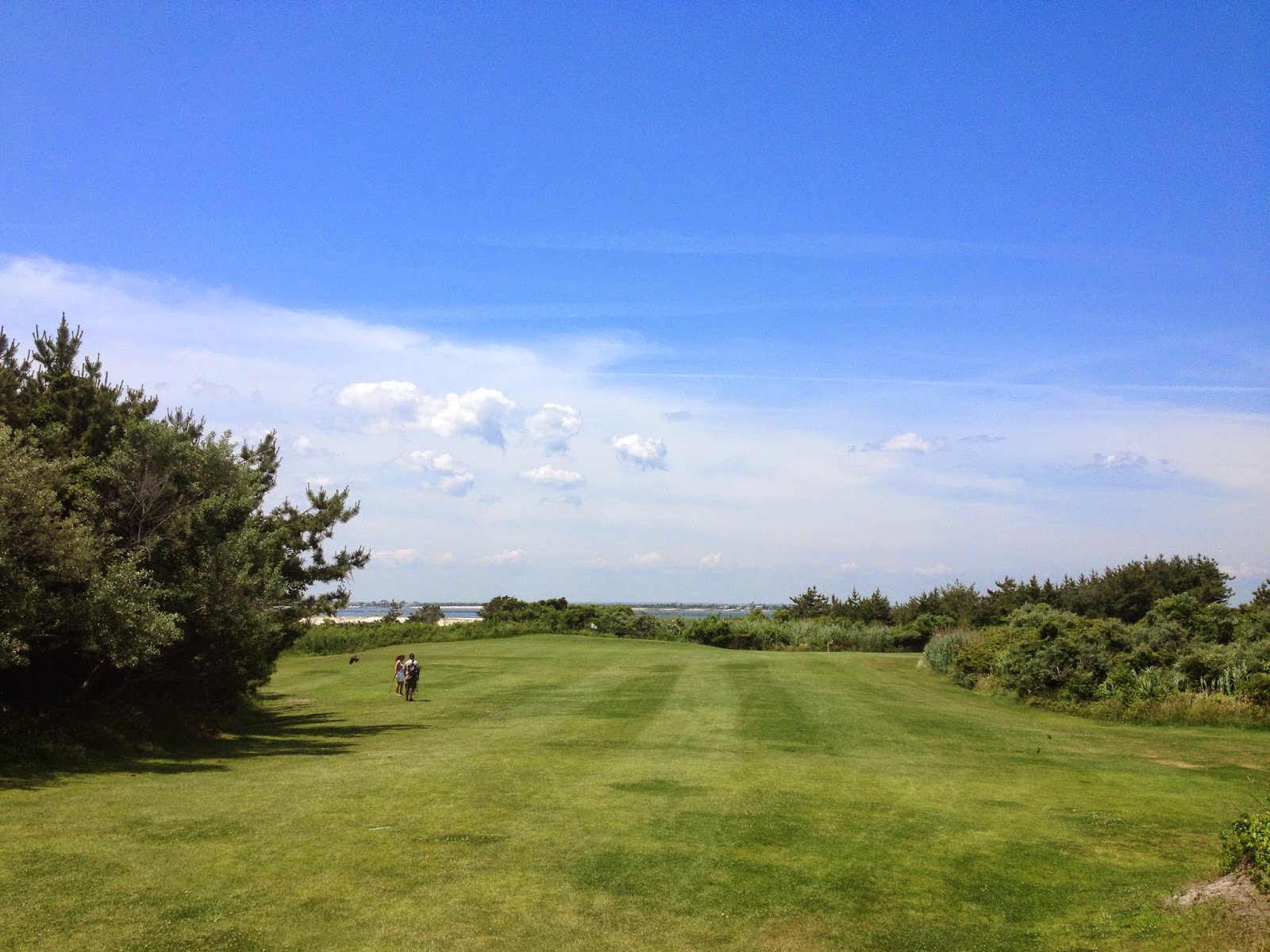 There's lots of places on the course where you get to lay eyes on actual ocean water. Where else can you get that for a measly $11 green fee? The answer is nowhere, probably. 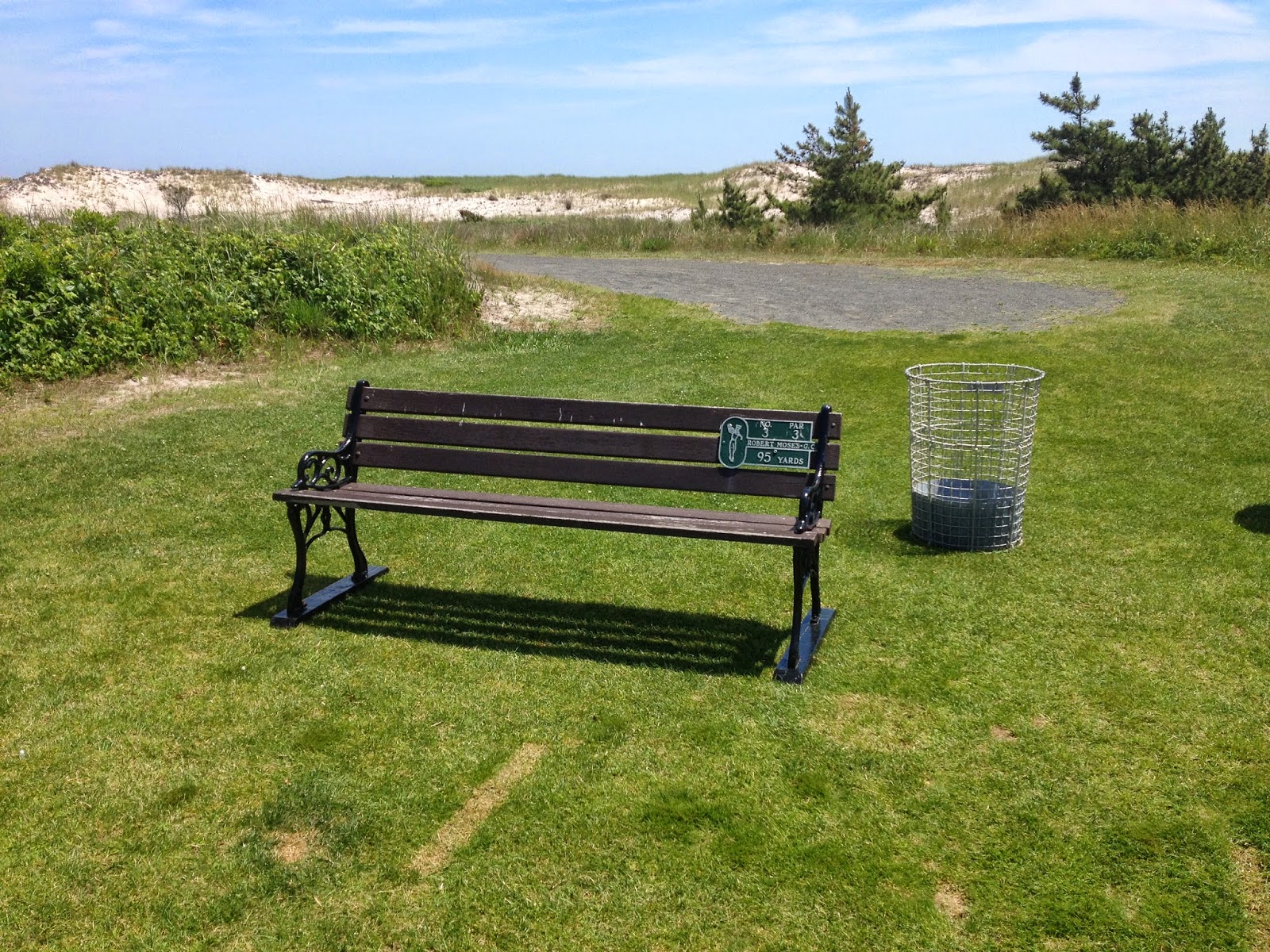 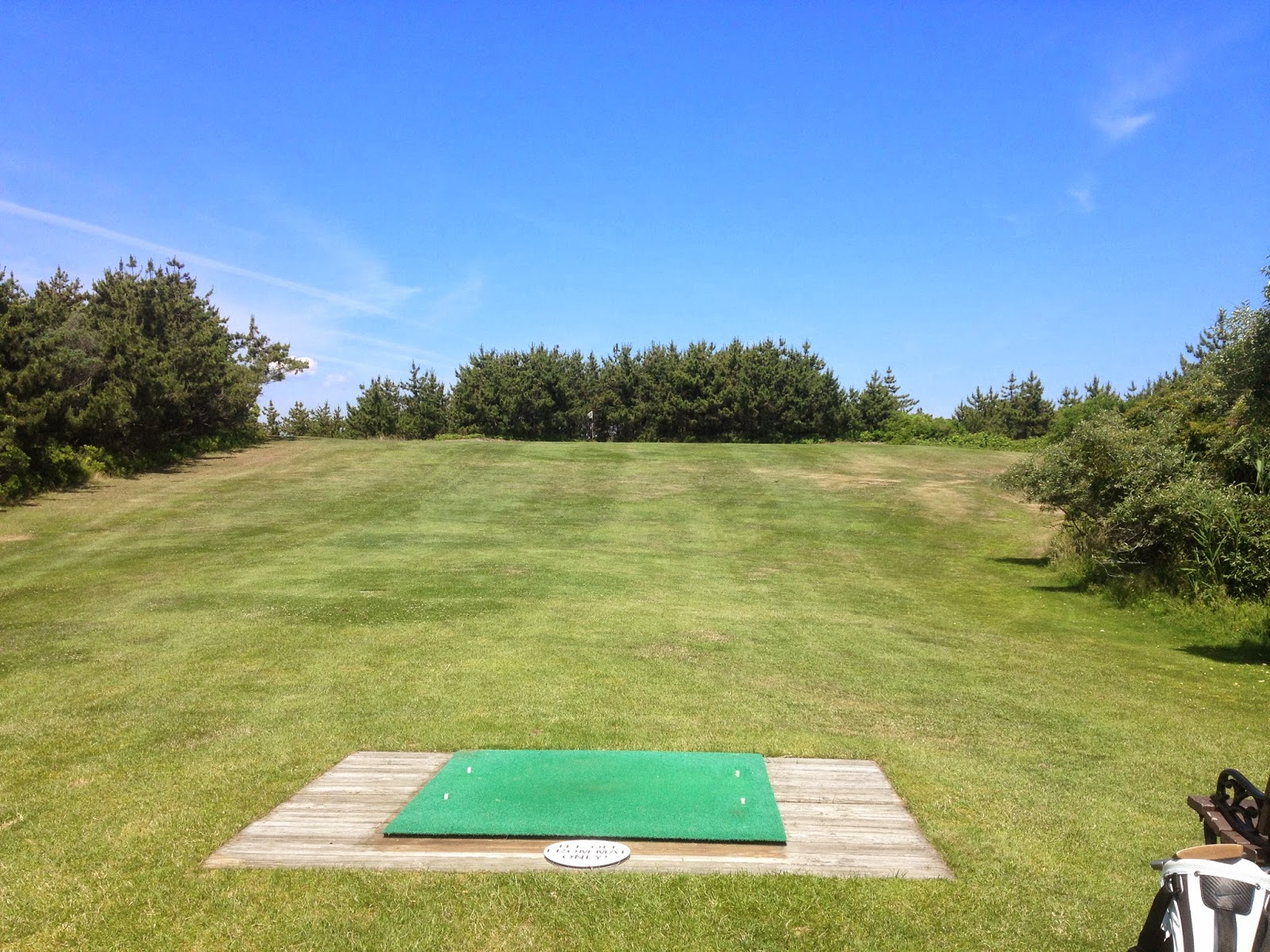 I don't know how it's done elsewhere, but so far at every pitch and putt I've been to around here, astroturf tee squares are the norm. Here they are set atop wooden platforms, which is a nice touch. Hitting off mats is not exactly ideal, or legit, but hey--we are talking about playing golf while wearing flip-flops. Lighten up, jack. 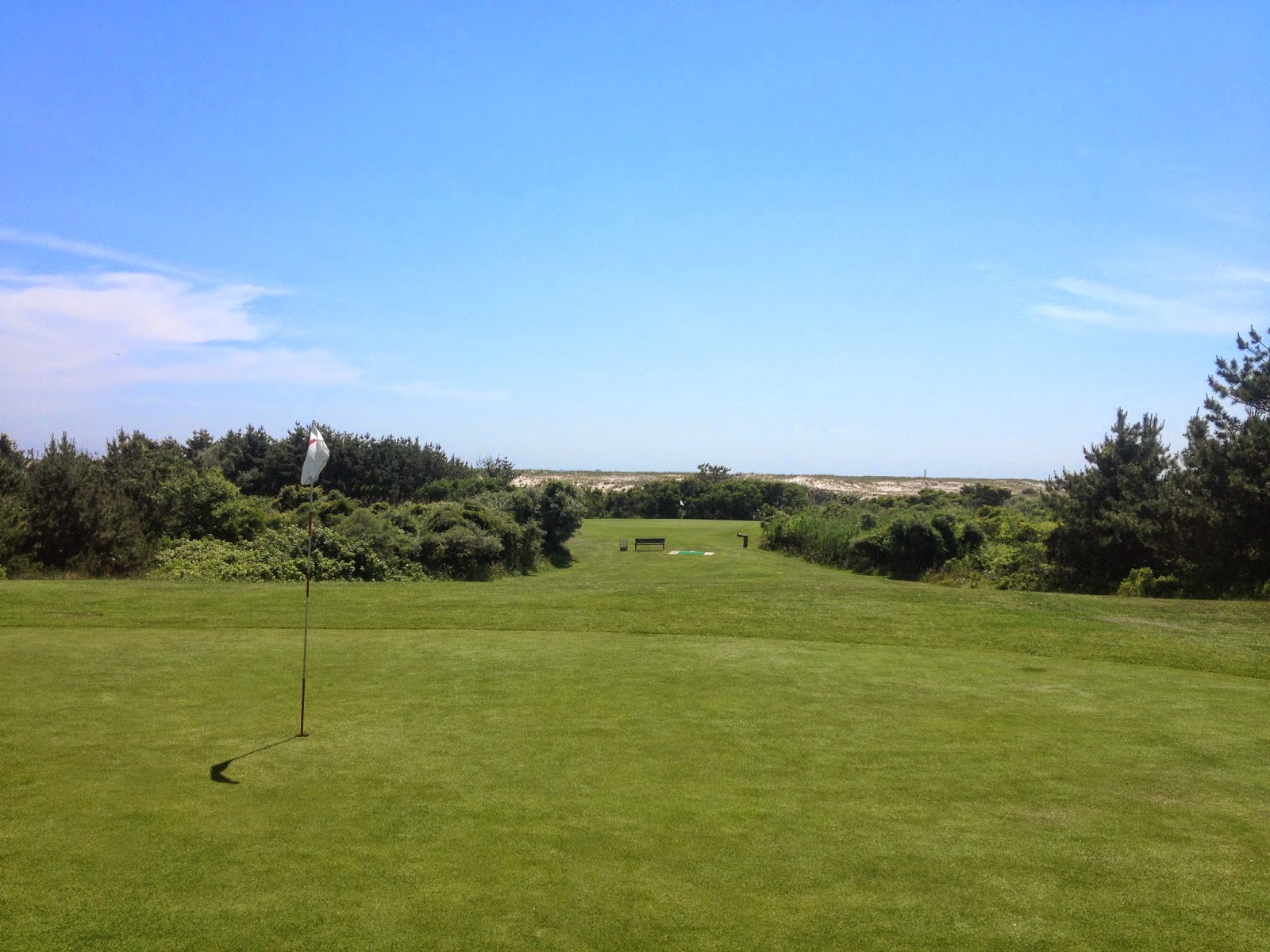 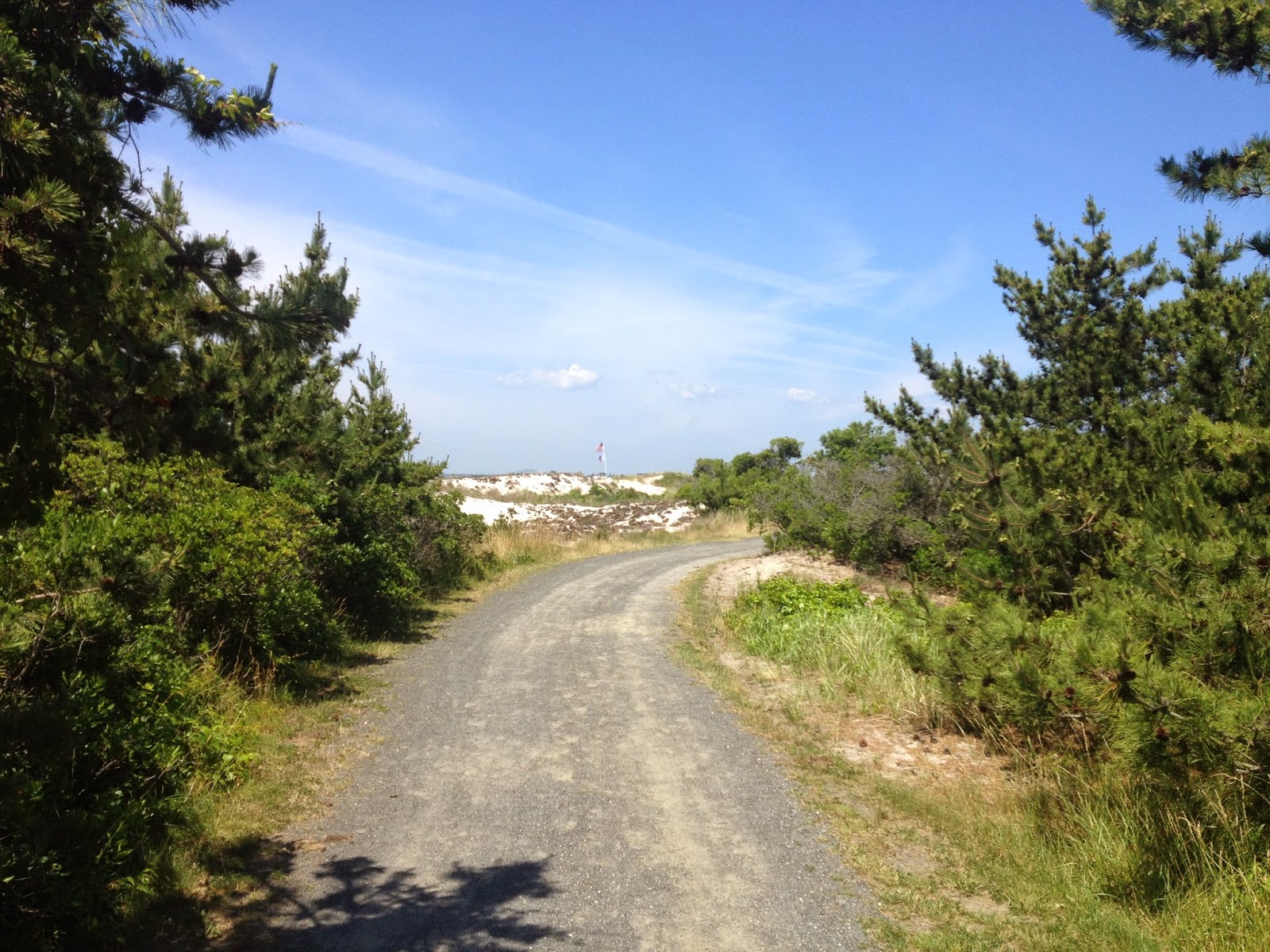 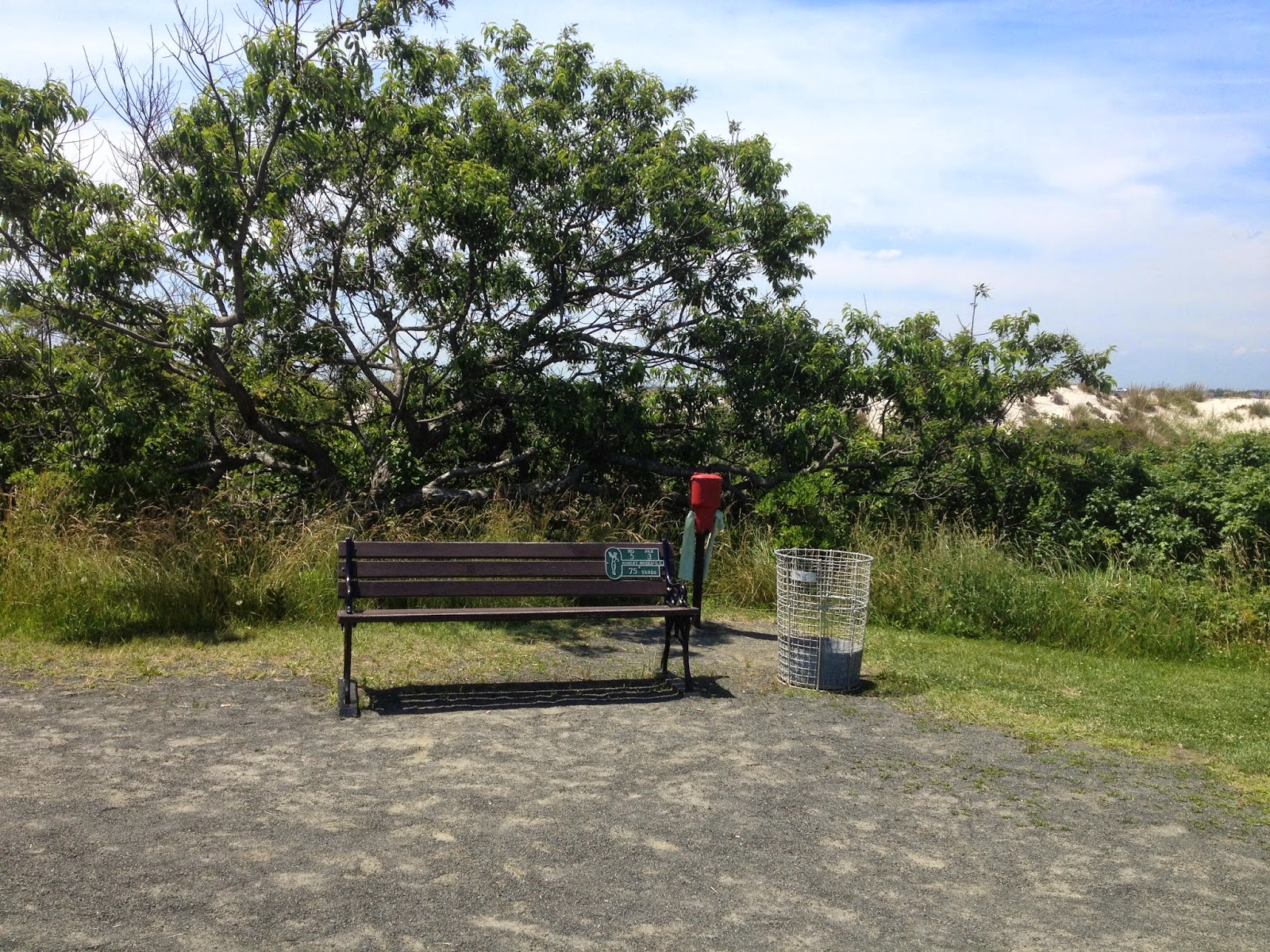 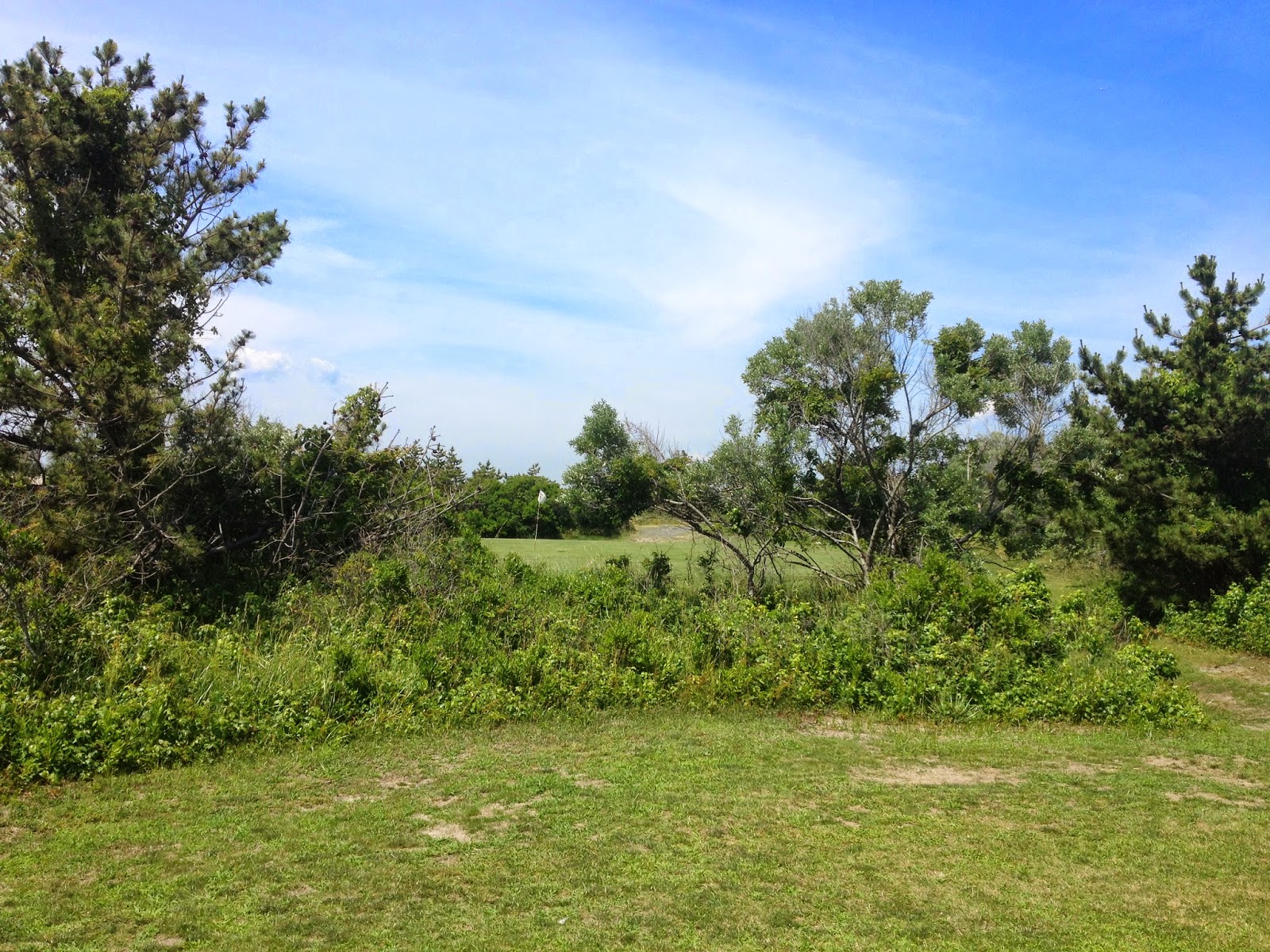 Tranquility. Even when it's busy, you don't see a whole lot of other pitch-and-putters thanks to the layout and the abundant natural veg. 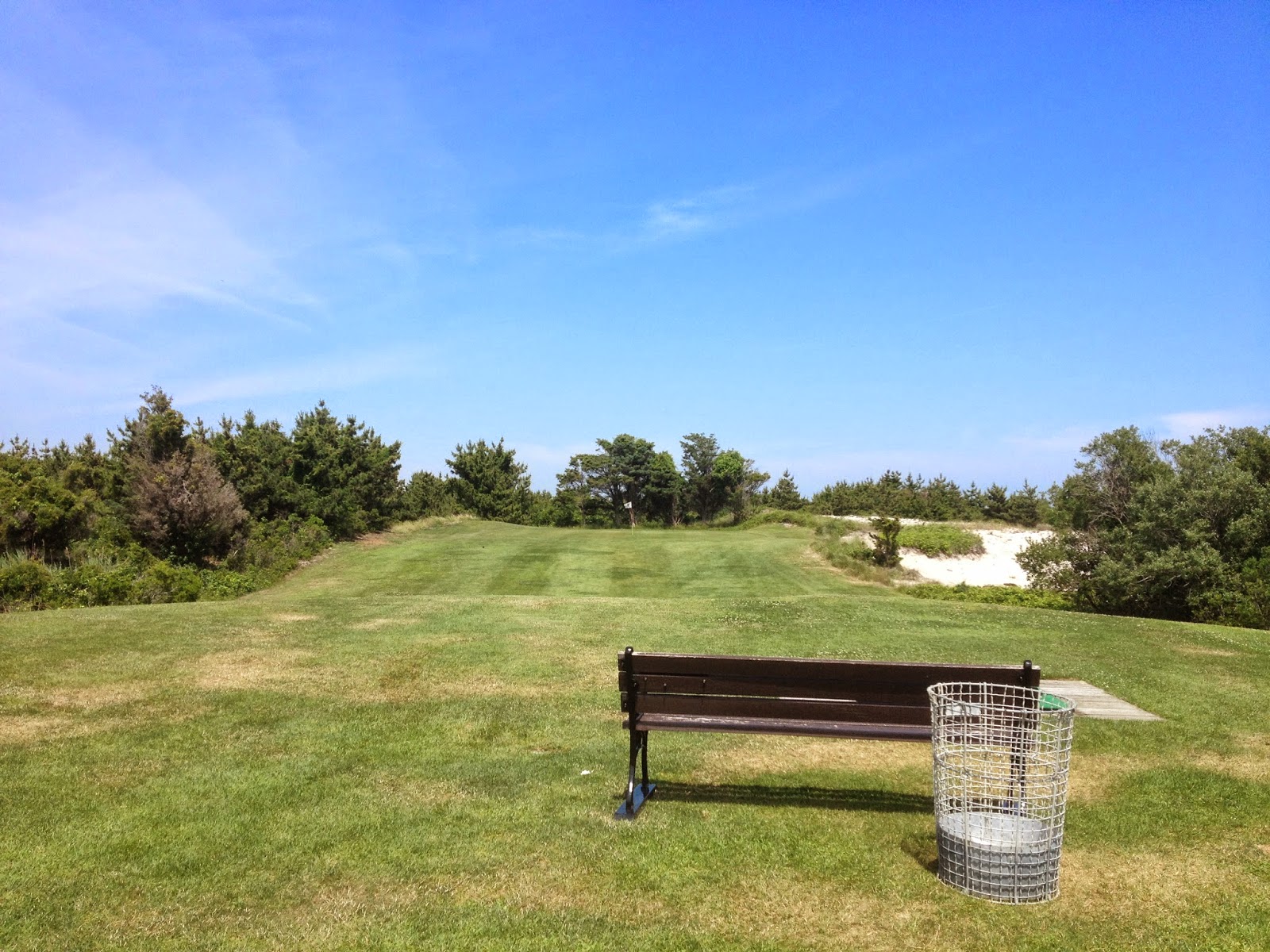 This little 70-yarder is especially postcardesque. If you squint hard, you can pretend you're at Shinnecock or something. 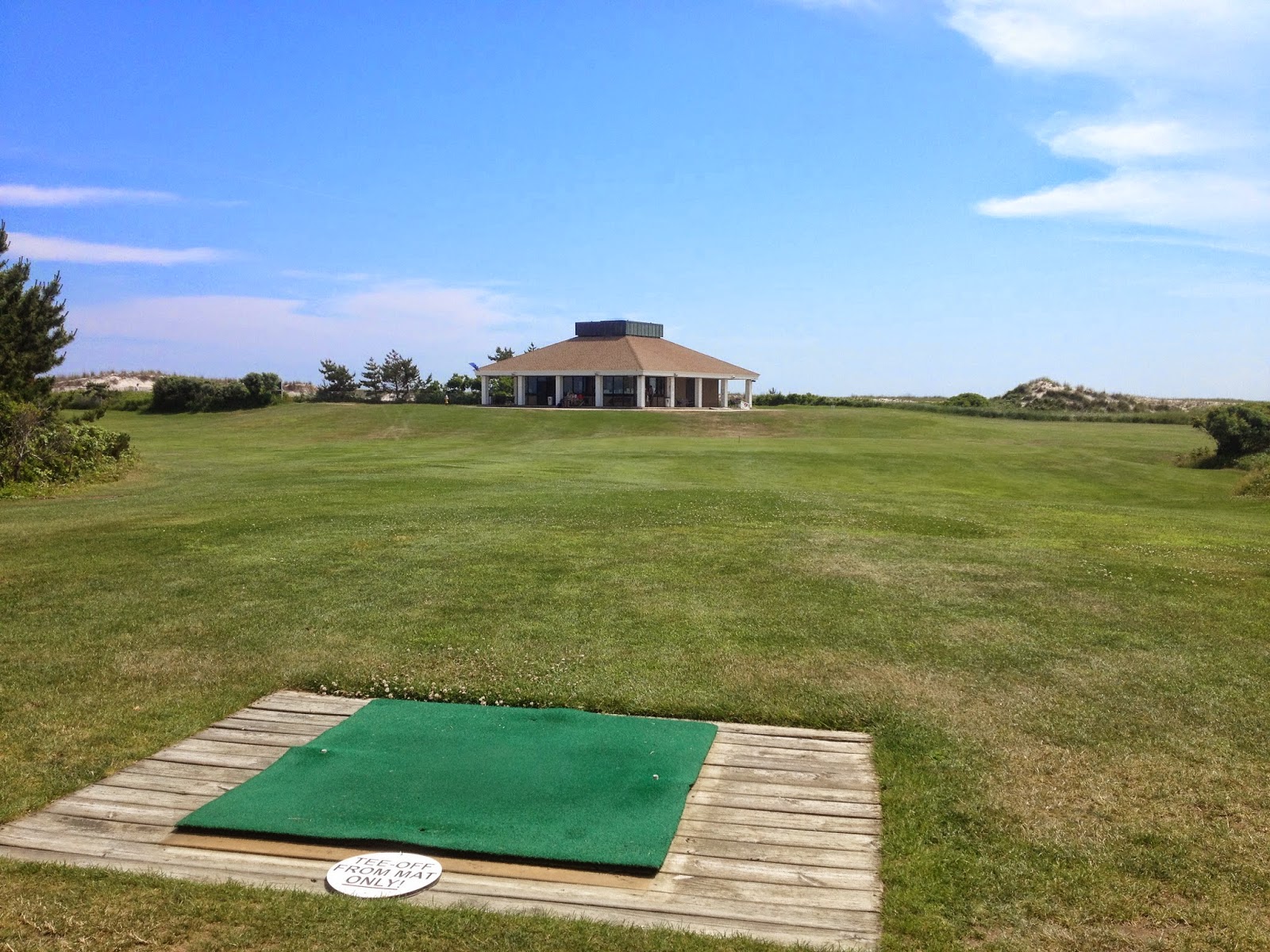 Awkward short distances like this little 60-yarder provide a good challenge for everyone. 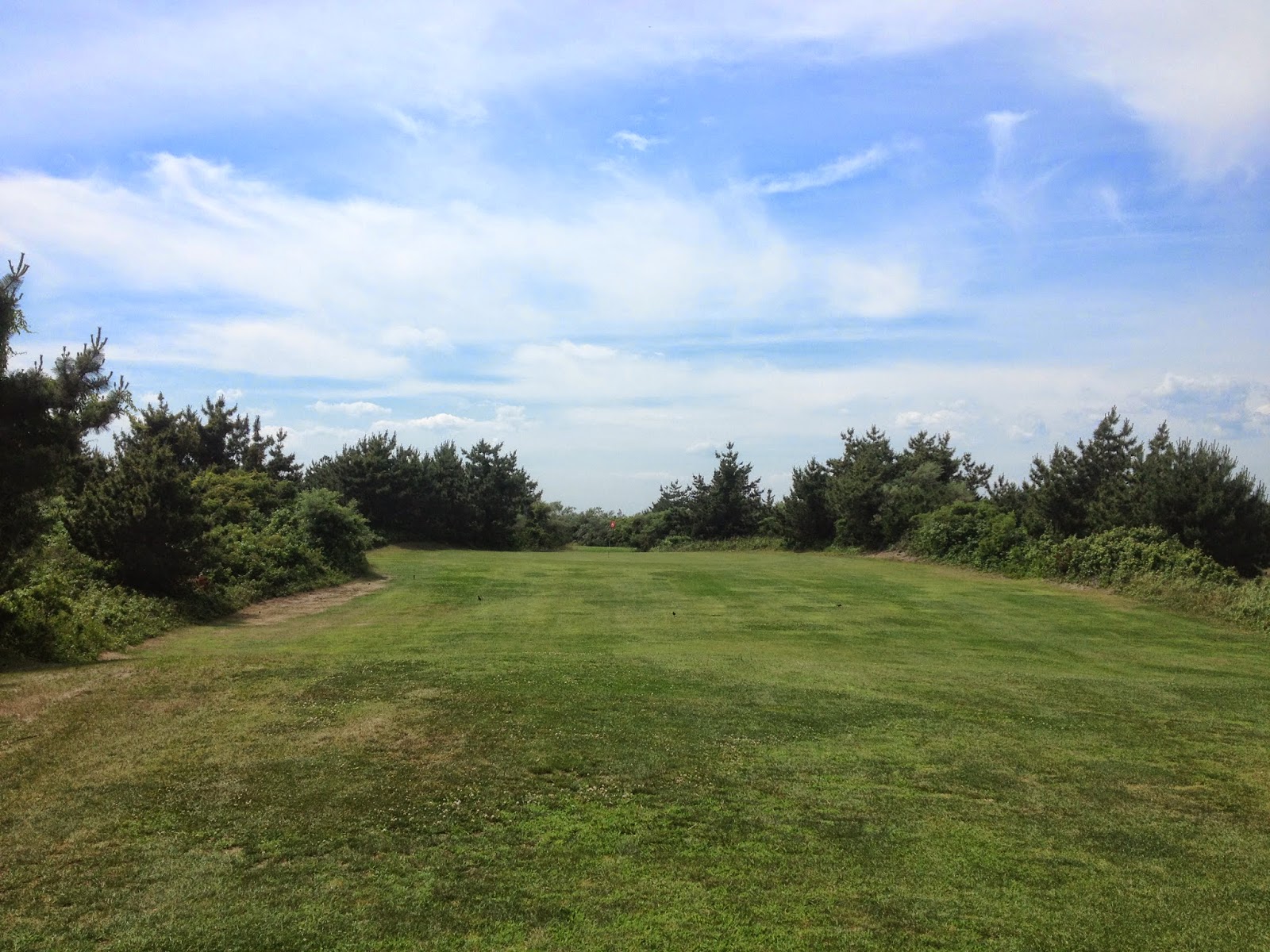 Almost every hole is secluded from the others, each one lovingly carved out of the brush by whoever designed this place. Again, another high-end golf course feature, rendered in miniature. Really fuckin' cute if you ask me. 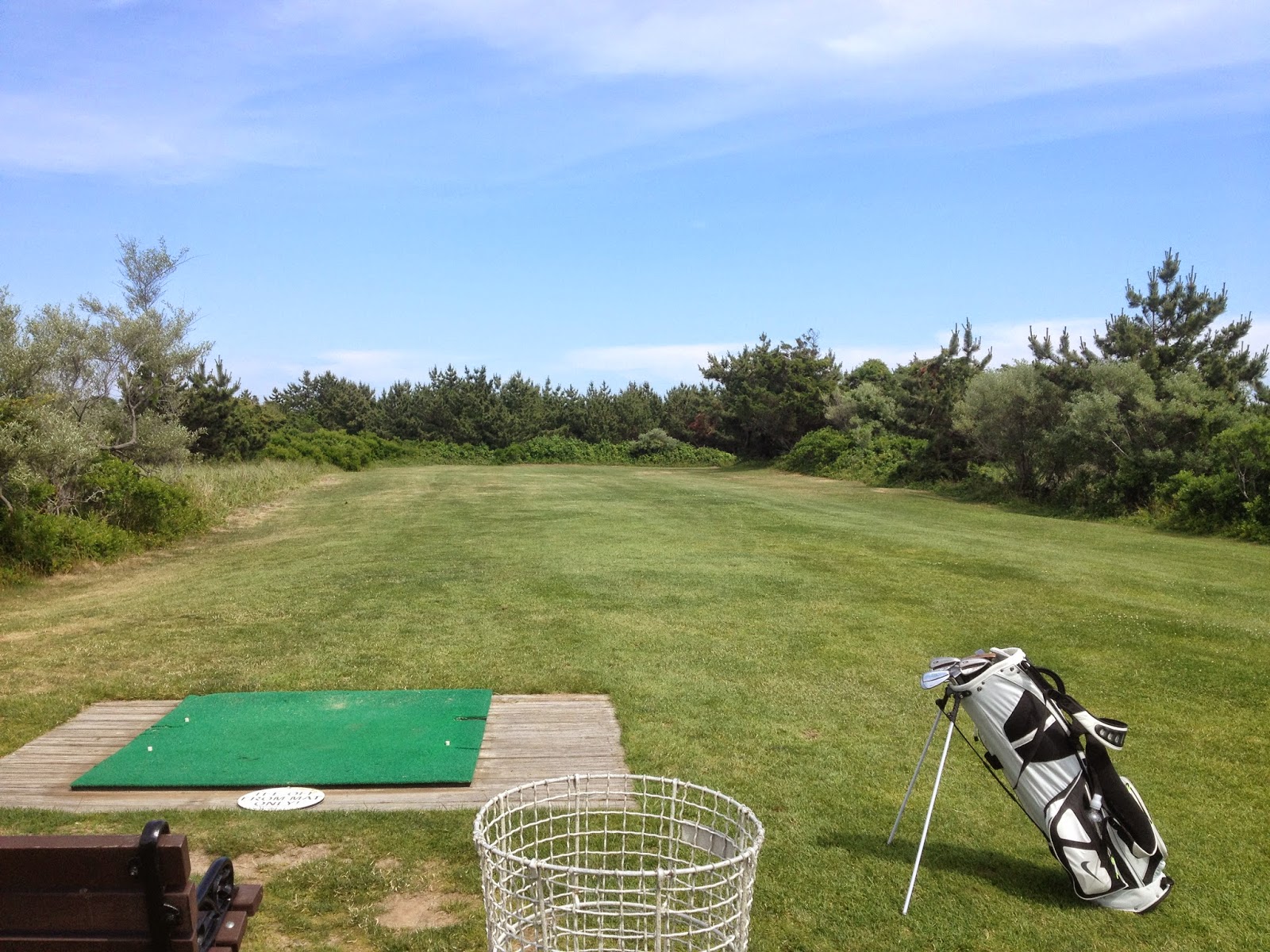 Here's something you don't see in the world of pitch and putt: a sharp dogleg, 110-yard "par 4". The pin lies somewhere behind the brush on the right. You can either be a wuss and dink a chip down the "fairway", or else try to be mini-John Daly, throw caution to the wind and attempt to blast a wedge clean over the hazardous, poison-ivy riddled corner. 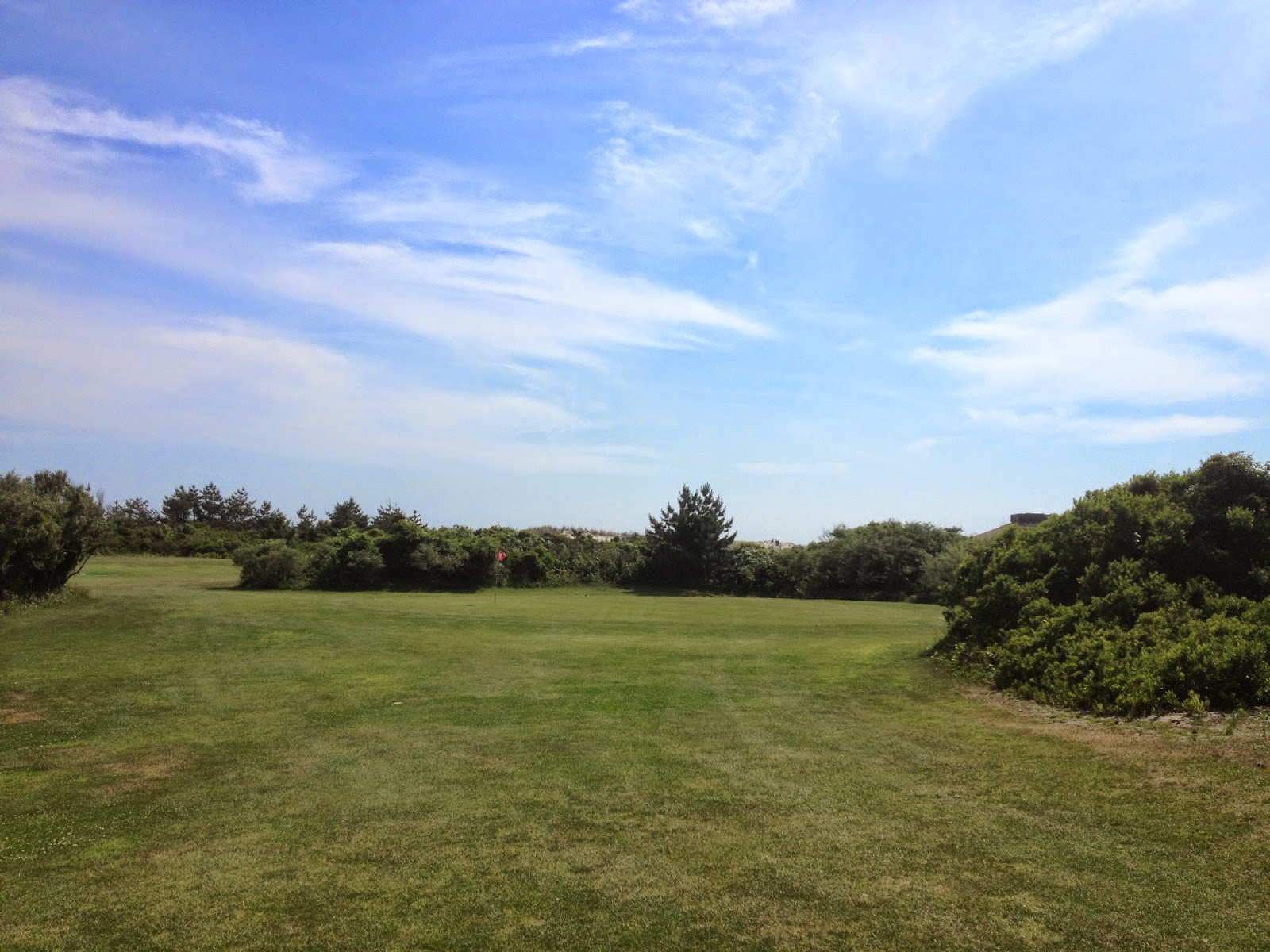 We both went for it and lost three balls in the process. I made double bogey; Ms. L a 9. But hey, no guts, no glory. 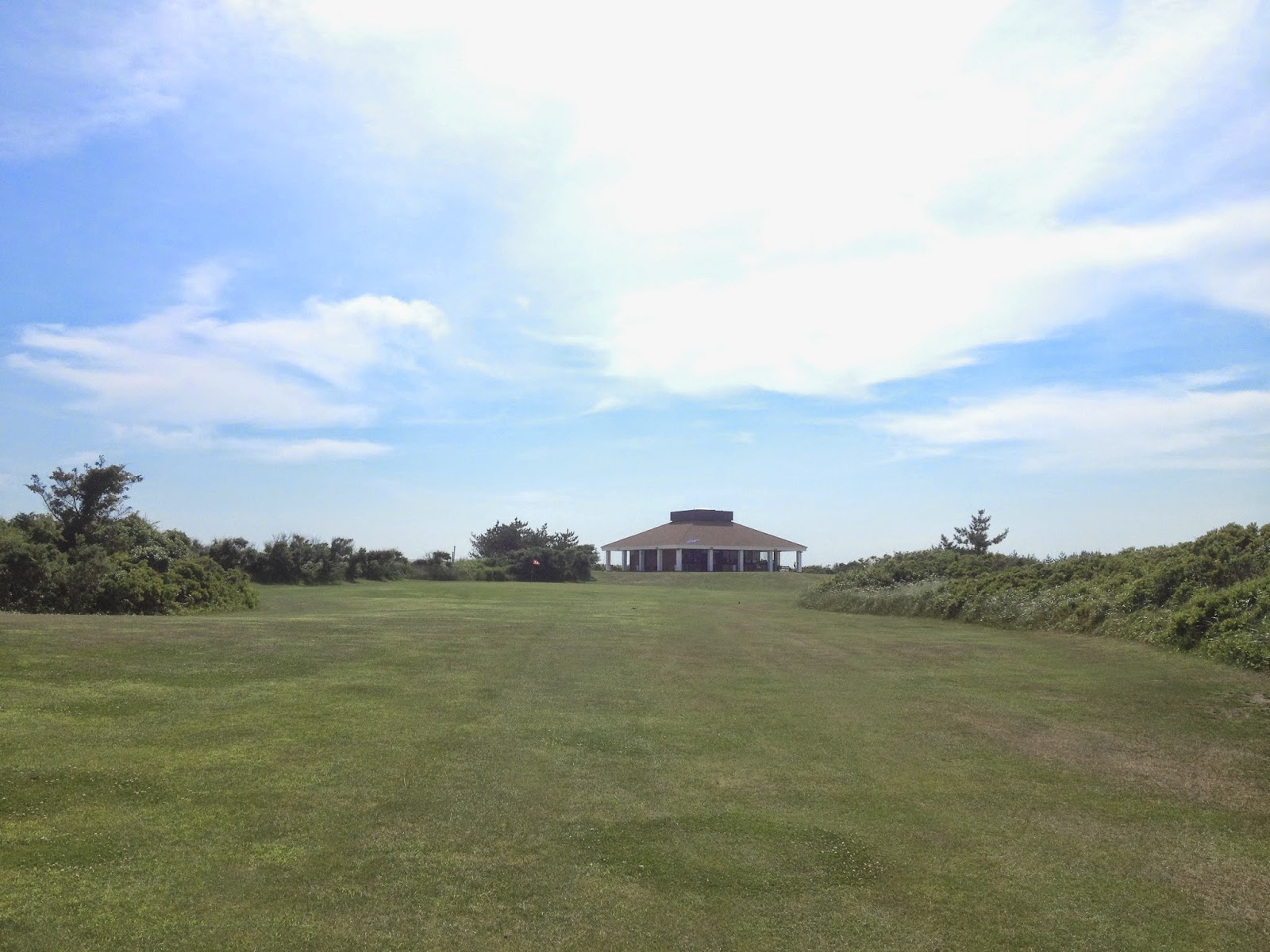 View of the clubhouse from 18, with the Atlantic shoreline just behind it. 100 yards, and almost always into the wind--for a pitch and putt par 3, this is a beast!

As always we had a blast. I got it around in a fairly tidy 58 strokes (+3), while Ms. L managed a bogey round of 73 despite both an eight and a nine on the card. For someone who literally only picks up a golf club a few times a year, that's pretty darned good. I want to say she is a natural, but maybe there is some osmosis learning going on--when you live with someone who compulsively works on his swing in the living room, leaves the TV on Golf Channel by default and regularly brings up Hogan's "Five Lessons" in everyday conversations, it's bound to have some effect.

Someday I will have moved on from the New York area, and once I have, RMGC is sure to be one of the places I miss most, even though we only come here a couple times a year. Because as I said, having a good time here is automatic. As far as golf venues go, the sheer joy to misery ratio found here just cannot be touched. To say nothing of the pocket-change green fee. If I never come across another course like this in my lifetime, I won't be surprised.
Posted by Legitimate Golf at 10:07 AM