Rough going out there today. The summer temperatures have been moderate lately, but swamp-ass humidity persists. Gad, do I hate summer golf in the city. DBGC is looking as rough as I've ever seen it. The greens are pretty much hybrids of grass and sand at this point.


The first tee was empty when I got there, praise God. I was all set to take off by myself when some geek comes driving up from the ninth green, all in a rush. He goes over to the starter and starts mewling about the slow play on the front nine and asks if him and his partner (who was still putting out) could jump on the first tee again. The starter, being a complete doormat in the true NYC muni golf mold, made no protest. So the geek comes over to me and informs me about the new development. 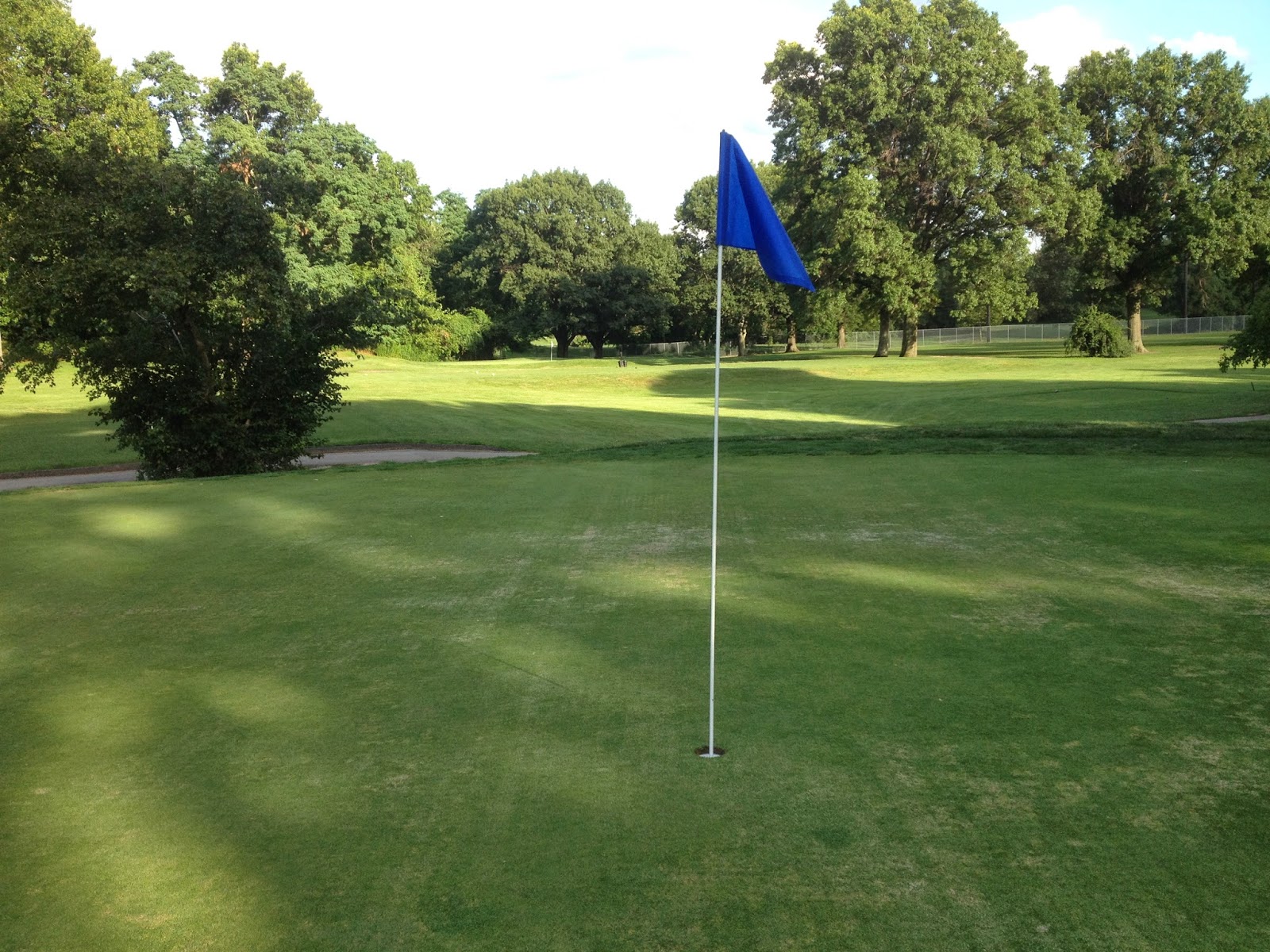 One of the worst things about ghetto golf is the anarchy. When I feel there is no order is when I tend to spiral into the foulest moods. Surprisingly I can tolerate a lot, but there must be some semblance of order. I hate it when people decide they don't like the pace of play on their part of the course and then snoop around for a better place to shoehorn themselves into. I hate the feeling that anything goes, that anyone is free to disrupt anyone else whenever their whim compels them.

My blank reaction probably said a lot, but it didn't matter--these two were completely caught up in their own selfishness. The polite thing to do would have been to not bother the guy on the tee, let him tee off and go on his way, but such an idea did not even occur to these bastards. It couldn't. Right then it was decided there could be no reciprocal courtesy, and that everything about them would henceforth fill me with loathing and disgust. 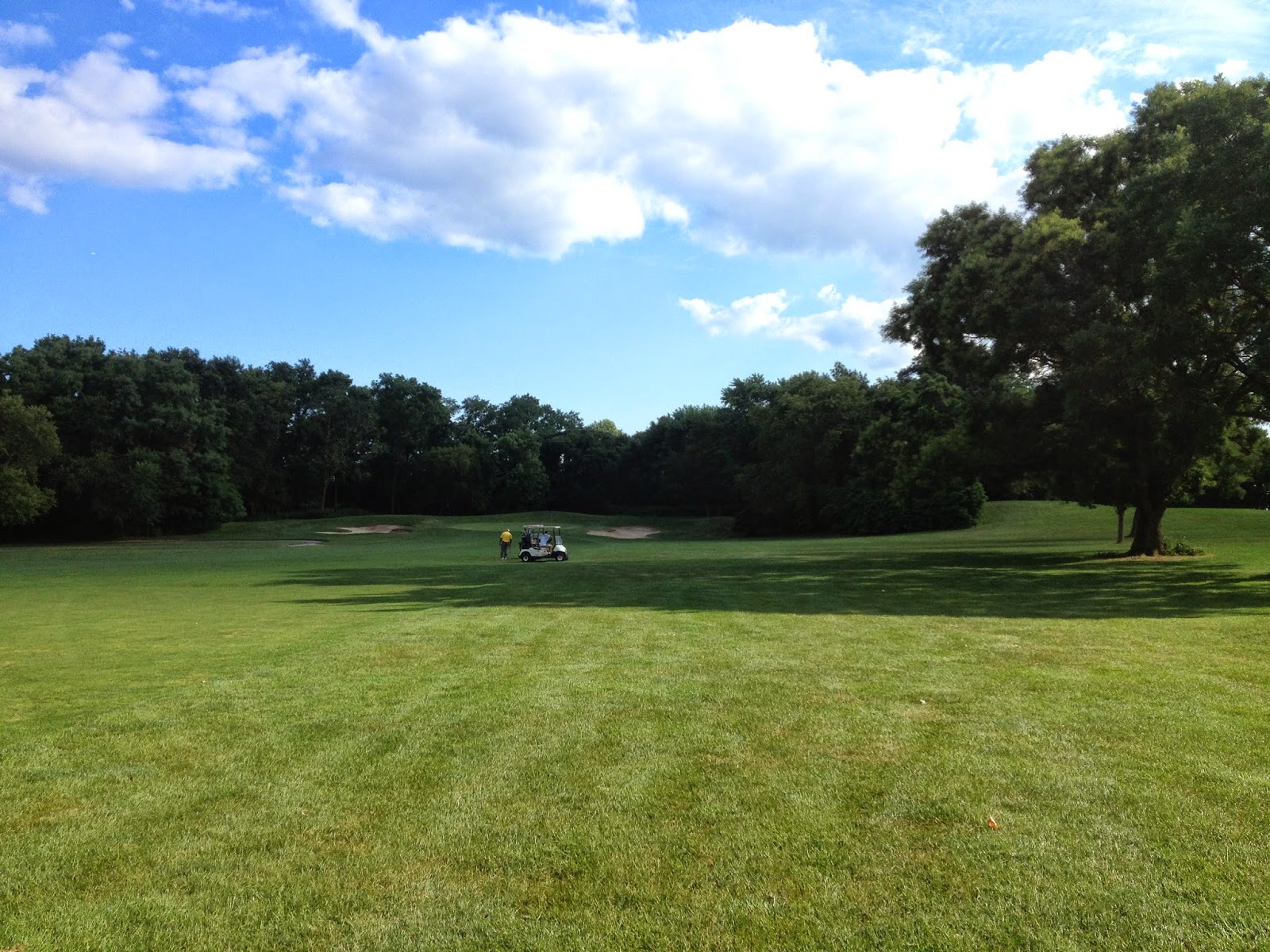 I walked down the first fairway seething. When it was my turn to hit I began to self-immolate--if these sacks insist on bringing me down, I can bring down too. I can irritate too. In fact they will regret ever meeting me. Before hitting my shot I committed to making no fewer than ten practice swings. (Truthfully I could only make it to eight.) I stared at my glove for a few beats, pretending to examine it. Finally hit the ball, it trundled on to the green and I began a very slow walk. 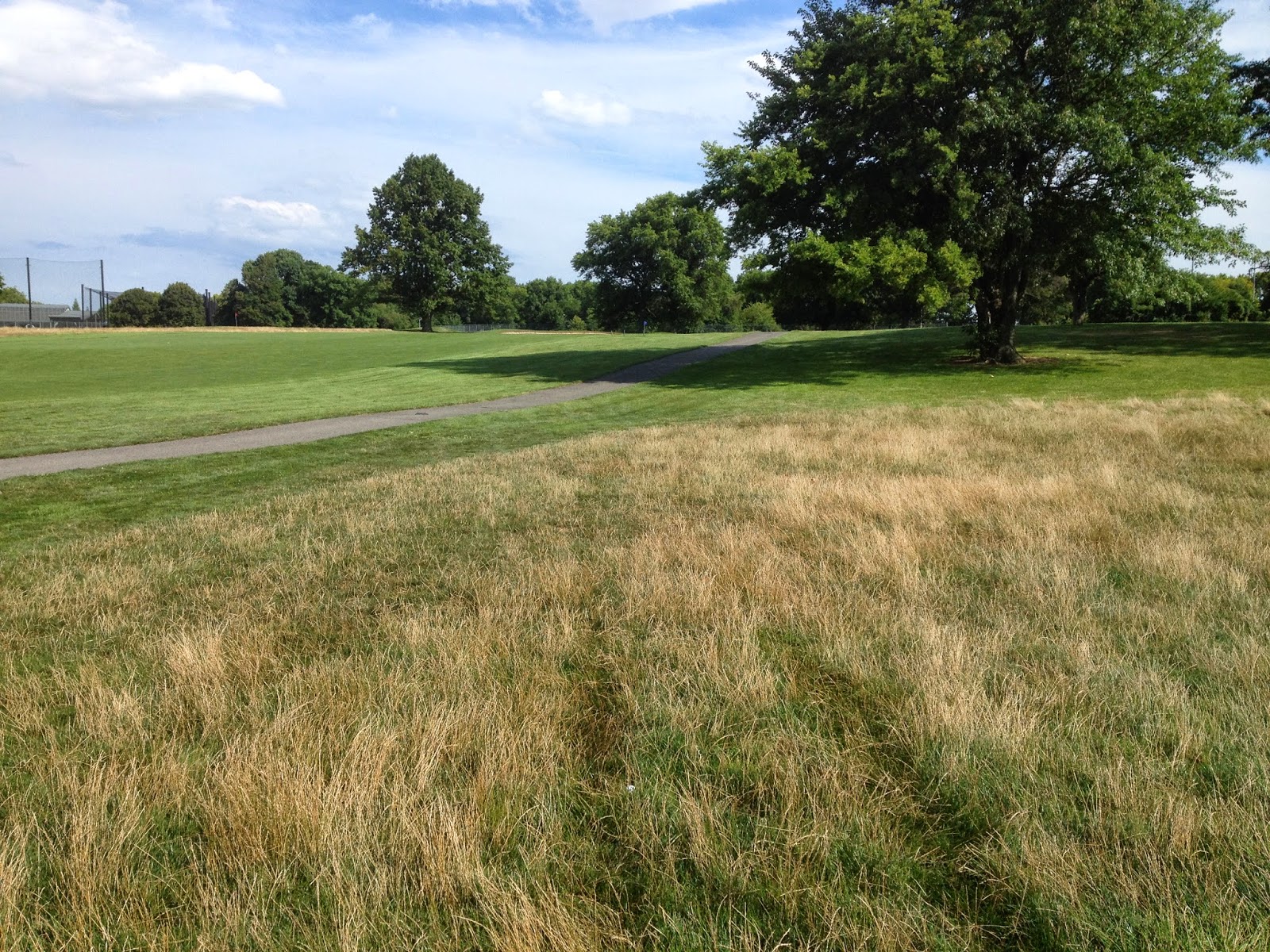 I knew full well that all this constituted a petty and passive-aggressive act. But what are you going to do. I had been crossed. Certainly can't cross the line and be aggressive-aggressive, nor could I live with being passive-passive either.

It was an older guy and a younger guy. You could tell they had just met nine holes ago and were really hitting it off. Good for them. Grating for me, under the circumstances. The younger one was a total golfing geek. You could tell he was fairly new to it, all eager and high on the game--kind of reminded me of myself before the futility of city golf squashed my spirit. What an annoying twerp. The older one was a surprisingly good player and because of this the younger guy would shadow him like a puppy, hanging on his every word, all eagerness, trying to glean wisdom. Bleccch. 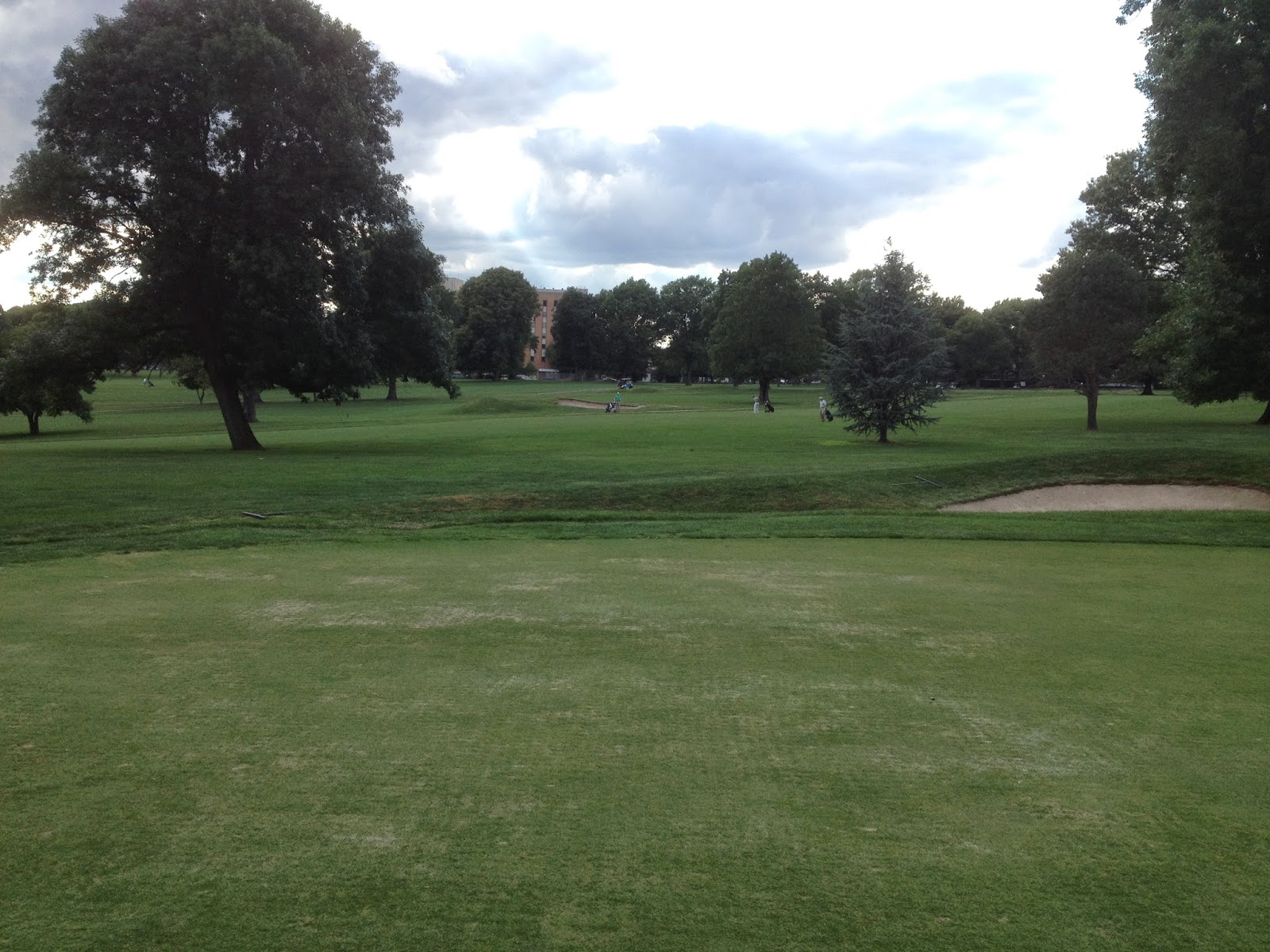 I tried hard to keep up my slow play antics but eventually I couldn't help but to revert to my organic pace. On the greens though, I did manage to take forever and you know what, it felt good. For once I felt settled over the ball, and rolled it insanely well today.

I had worn the wrong kind of socks and by the tenth hole started to develop some heel blisters. Fuckin' hell, now I was feeling chafed both figuratively and literally. Well that tore it. I'd had enough of trying to spite everything and on the green I went up to the others and said, "Look I'm having trouble keeping up with you guys," (they each had their own cart) along with a sarcastic remark about me getting old and slow (I was walking and carrying). I pointed to the several open holes ahead and said they ought to take advantage and play on without me and my walking holding them back.

The younger guy put on a sour puss at this suggestion, as if insulted. Before walking off he offered up a meek, insincere "Well, it was nice playing with you." I felt like shoving him off the green. There was nothing nice about playing with me. I was the biggest miserable prick on the planet for the last ten holes and I knew it. What a mincing phony. I was absolutely correct in despising him from the start.

I was never outwardly rude, but I did give the silent treatment and I'm pretty sure that goes against some part of the Rules of Golf that mandates sportsmanship or some shit. Pffft. I didn't offer a single "nice shot" even though there were several. I hadn't realized how elemental the exchanging of compliments is to golf until I muzzled myself today. Admittedly the silence was conspicuous. On the seventh hole the older guy rolled in a birdie putt, then looked at me and said "thank you," as if to shame me for withholding compliments. What a stupid mess. I wished for the earth to open up and swallow us all. 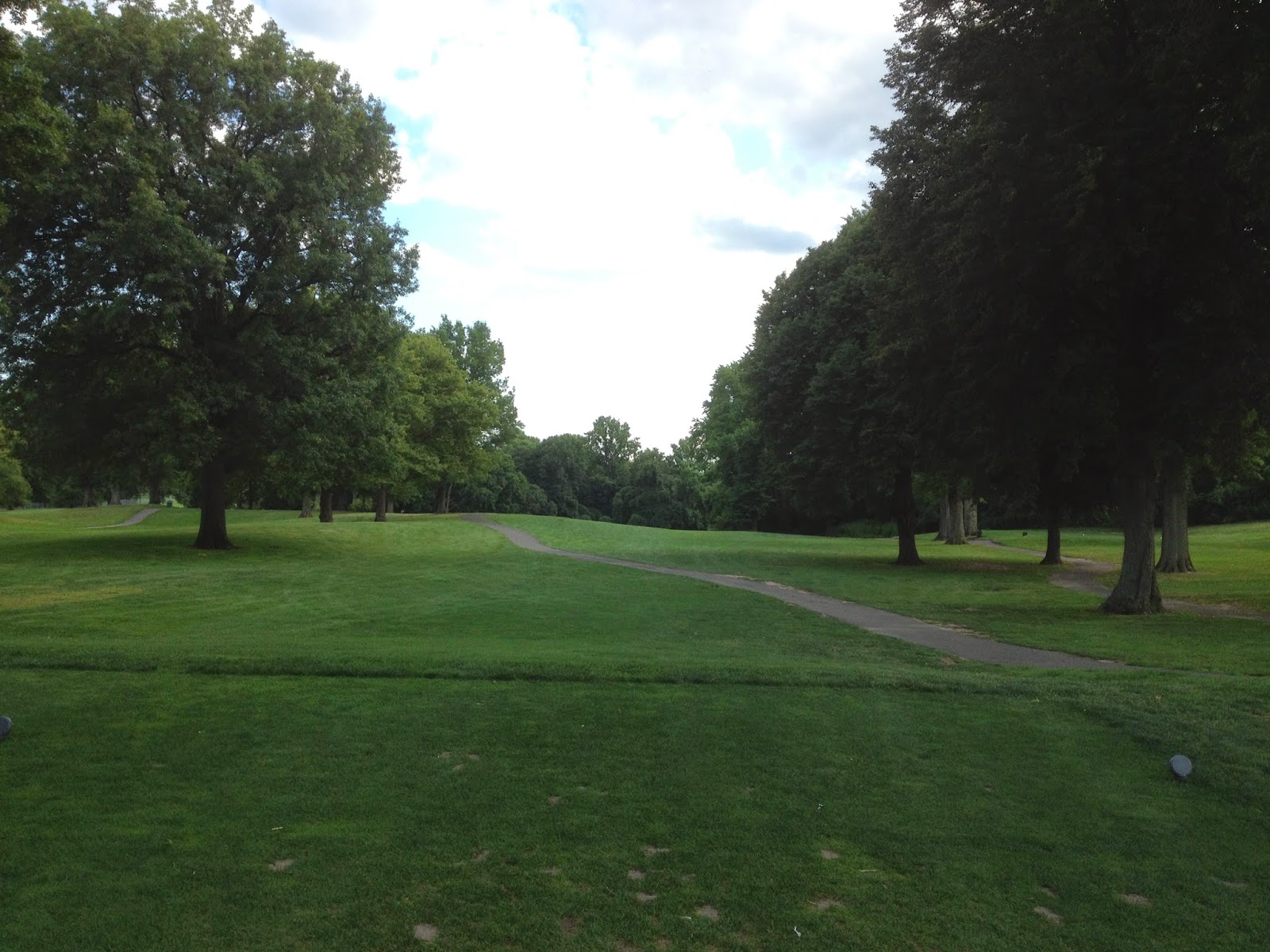 It was a relief to be rid of them but the matter still kind of weighed on me, probably more so now that I was alone to reflect on it. I had managed to somehow shoot 39 on the front through gritted teeth and had a good shot at breaking 80 today, though I knew that finishing it off wouldn't be easy. In addition to my mind, my legs were also starting to wear out, and those heel blisters weren't getting any better. On the 12th I got onboard the bogey train. On the 14th, my full swing left me. But I was at +5 with four holes left to go. That meant I could give up three strokes to par and still break 80. Under the circumstances though, that seemed really hard.

On the 17th tee fatigue asserted itself in a big way and I buried a steep 5-wood into the turf underneath the ball, blooping it straight up in the air. Then a shanked chip leading to a slicing seven-footer just to save double bogey. So I went to the last tee knowing that I could still shoot 79 by making a birdie, but also feeling like there was probably not enough gas in the tank to pull it off. Sure enough I could only smother and scrape my way to the green. I pulled off yet another tough putt to finally hop off the bogey train, but it was too little and much too late.

I left feeling deep bitterness and disappointment, with a dusting of shame, like I'd chucked away another good chance at a good score. But reflecting on it now let's face it, it wasn't really that great a chance. I scraped it all day and was fortunate to have shot 9-over. It was all putting. 26 putts. I made everything, it was craziness. In the best moments it wasn't just holing putts--I was commanding them. It was a special feeling and blah blah blah... who am I trying to kid. I still feel bitter and disappointed.
Posted by Legitimate Golf at 11:46 AM