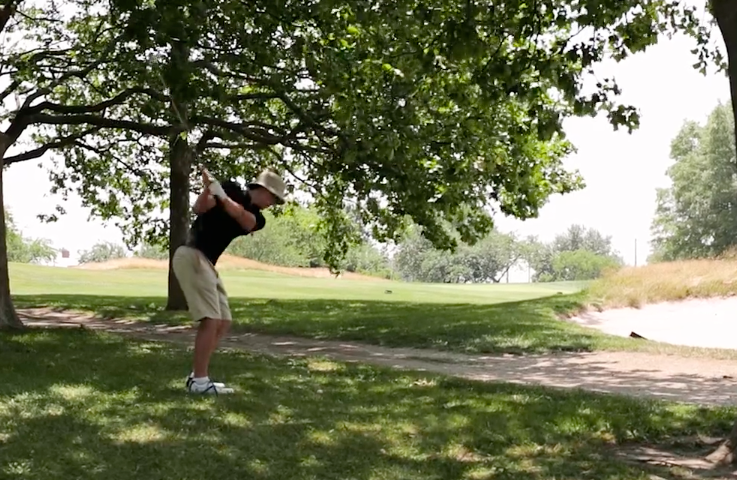 Well as far as I was concerned, the whole thing had been consigned to history. But no, not quite yet. Not for me at least. You see, some ne'er do well with a camera thought it would be fun or funny to put together a highlight reel of that whole sweaty day.

I don't see it as particularly fun, or funny. But here it is, you can watch it for yourselves. See if I care. At 0:23 you might spot a lanky guy attempting to punch out from under some trees. You might not actually make out where the ball went but the reaction more or less says it all.

That part kind of spoiled the whole video for me. It's a mostly nice video, nicely shot and what have you. But the bulk of it showcases sweet swings, crisp pitches, holed putts, everyone getting all frickin' high on life--all except for the poor jerkoff in the bucket hat, the lone lowlight. I'm not sure why I'm so affected by this. Maybe I feel bad for the guy, I mean he's just grinding along like everyone else, minding his own business, trying hard to make a run at his lowly amateur division title. Is it really fair to make this dude the poster boy for frustrated golf in Brooklyn?

I understand the motivation of whoever made the video. For a huge portion of the field the tournament was not at all about clean, crisp golf. It was more about fighting off unfavorable situations and bloating scores; it was about making do with with your scant ability and hanging on for dear life. So it would only be fair to show some lowlights I guess. (Still, I maintain that the ratio of quality golf to shit golf in this video downright sucks.)

Once the initial disgust wore off though I began to see the situation reflectively. Like with almost any other horrible shot there is something to be learned, that is once you are finally able to stomach the very recollection of it.

From what I know the guy was in the trees because he had hooked his second shot in there (this was a par 5). At this point he stood at one-under through four holes--an unusual start for this caliber golfer. To be frank, he was probably feeling a little too good about things. I think it's entirely possible that even great fortune can cause you to jump out of your own comfort zone a bit, maybe.

The third shot would have to be kept below head high to escape the trees, and from there he could just see a sliver of the front part of the green, maybe 40 yards away. Probably envisioning some kind of perfect low running chip out with a 3-wood, he must have gotten so fixated on that desperate little sliver of green--from where he probably assumed he'd follow up with a no-sweat two-putt for par--that he failed to really consider that tree trunk on the left, that it posed a very real threat to the shot.

I'm pretty sure most teen handicappers don't practice specialty shots in huge volume, and it wouldn't be surprising to see one make a gross alignment error, especially when attempting an unusual, improvised recovery shot with a three-wood, out of the rough. With some dude skulking around behind with a camera no less.

If I were to ever find myself in that situation going forward I'd like to think that I'd defer to cold logic and pick a way safer play than that. Find the fairway above all else. Because now, after the fact, it's all too easy to recognize that the pin that day was cruel and not to be taken lightly. It was perched on a scary little shelf, only five paces off the back, four off the right edge. Common sense dictates that I should've considered a bogey a very real possibility, from anywhere let alone from the rough behind the trees right? I mean if--and that's a very big IF--I were to pull off the best possible recovery shot, to a place where I'm looking at a probable bogey anyways, then why take the risk of making an eight or worse, right? Right.

By now I can at least understand what was going through that dude's mind in that regrettable moment. I am guessing that, buoyed by a dream start to the round, he maybe felt like he was playing with house money, and that he might as well try and keep this careening runaway under-par train rolling. If he'd only had the presence of mind to work out what is actually a very basic risk-reward equation, who knows what could've happened.
Posted by Legitimate Golf at 5:41 PM