Hanging out in the local scene 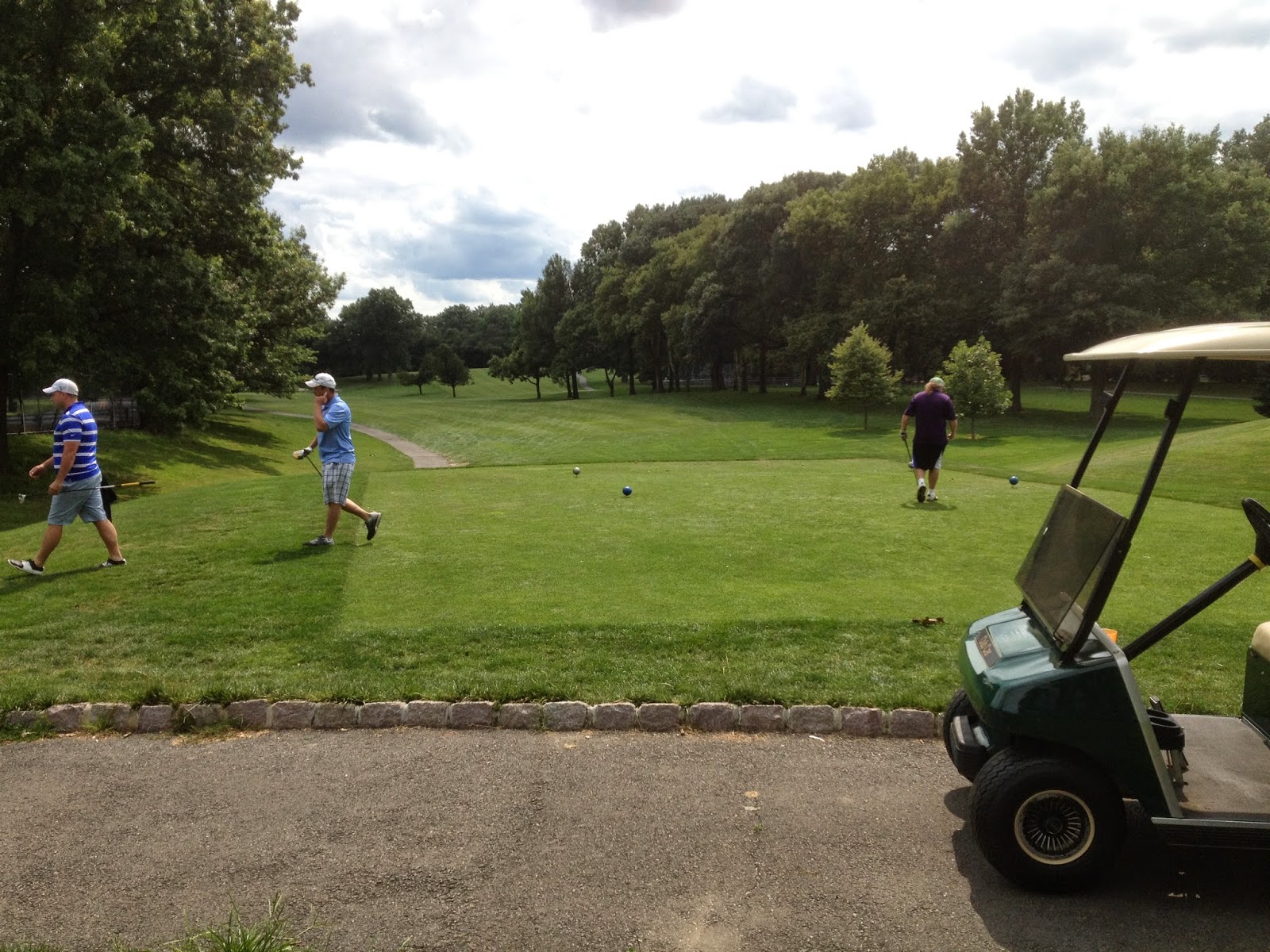 It had to happen. I've been playing at Silver Lake with some regularity now, and sooner or later I was bound to start mixing in with the locals. When I first discovered this course it was late fall, and I played largely on my own, zipping in and out in a matter of a couple of hours, almost wholly unnoticed for the most part. But now it's peak season and there's a lot of people out there and it has become more apparent that this is a locals-heavy place. You certainly don't see many high falutin' Manhattan folk like myself on this island, so it's probably best that I make an effort to blend in without rocking the proverbial boat. 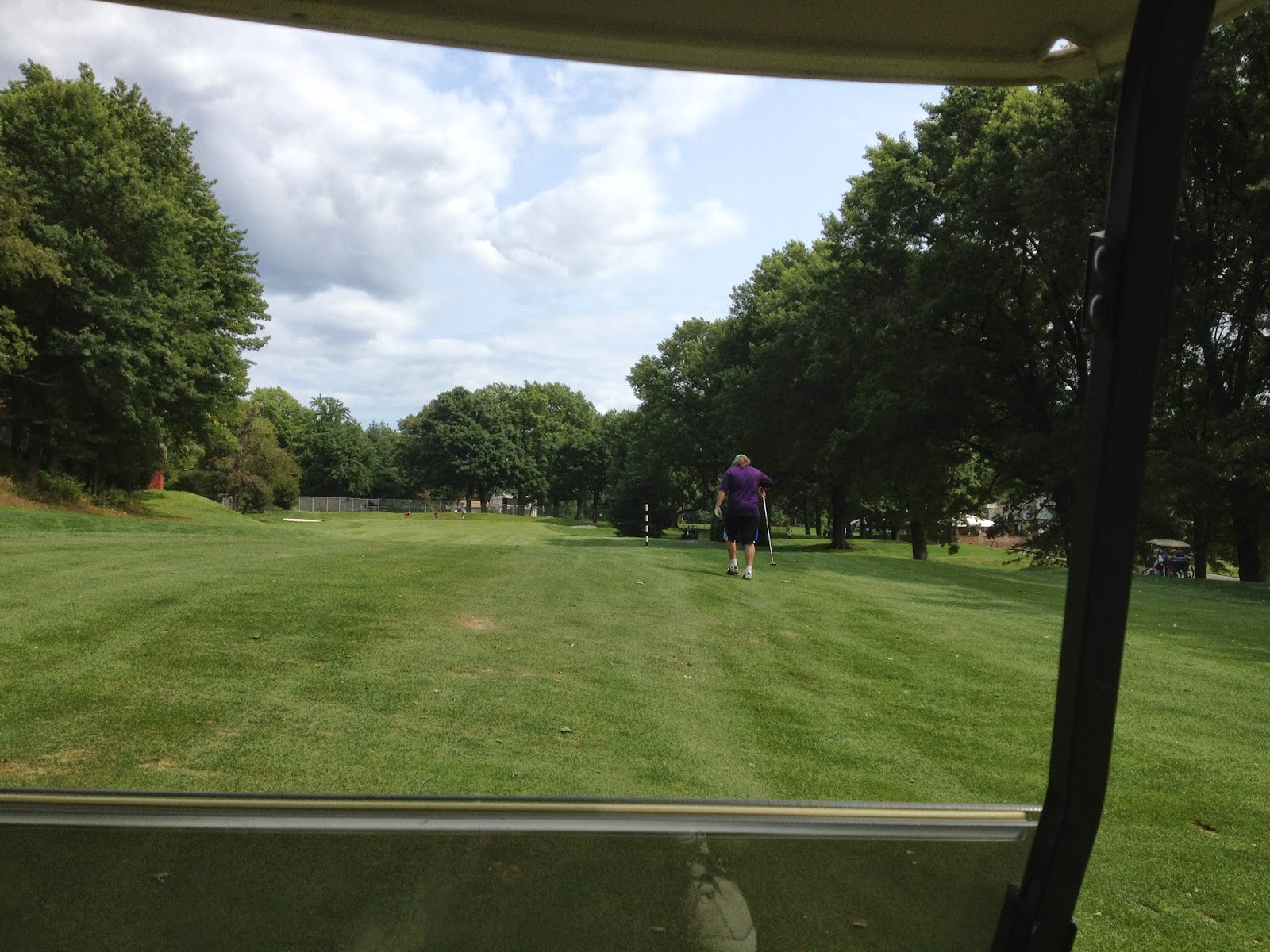 So today I got cart-paired with a crusty old regular, a true island native with thick accent and smoker's rasp and hippie-burnout ponytail, one of these guys who hangs around doing miscellaneous odd jobs around the course in exchange for free golf, I'm guessing. He looked to be in his fifties, yet his off-putting juvenility seemed untarnished by time, his foul mouth and love of crass, half-formed humor probably much like they were forty years ago.

Frankly I was a little bit scared of him. He was extremely particular about stuff, like where the cart should be parked, so after a few holes I just conceded total control of the wheel. He managed to claw out a few good scores on the front nine, but his shoddy, hooded-clubface wood-chop swing technique eventually caught up with him and blew up his round, which resulted in a whole lot more f-words, stream of consciousness and rambling self-psychoanalysis in the cart. A lot of awkward, nervous chuckling on my part today. 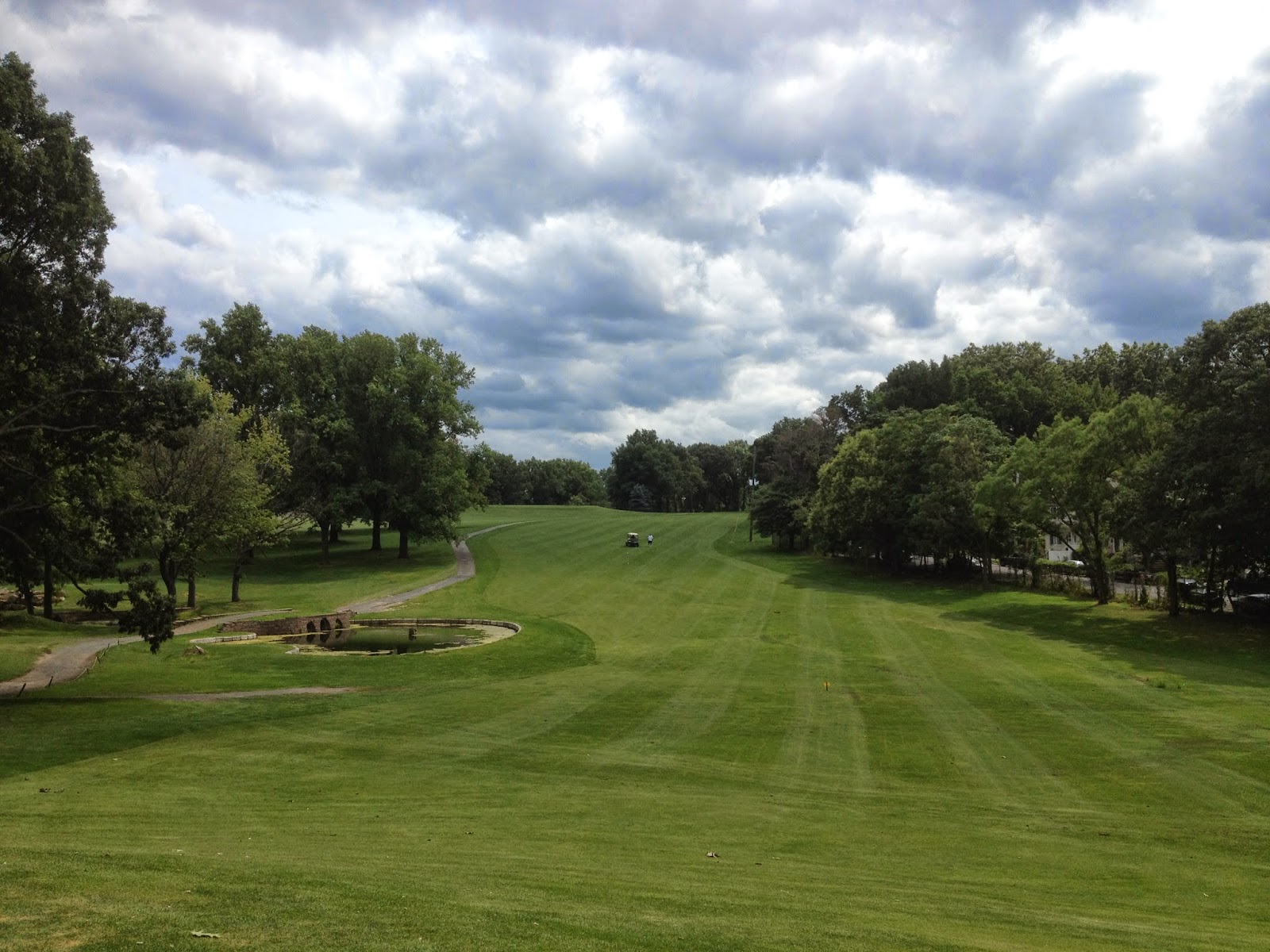 The other guys in the foursome were also local and they had a little match going. One was terrible and hit an ugly diving push-hook with every single club down to the sand wedge. Yecch. The other was quietly obnoxious. Early on he holed a medium-length putt and punctuated it with a victory jog. So after that he tried to run in every putt that came close to the hole. By the time the ball settled he was so far from the hole, we'd all have to wait on him to walk all the way back to tap it in or mark it. At this my cart-mate said "Hah, you're a real FUNNY guy," dripping with contempt. 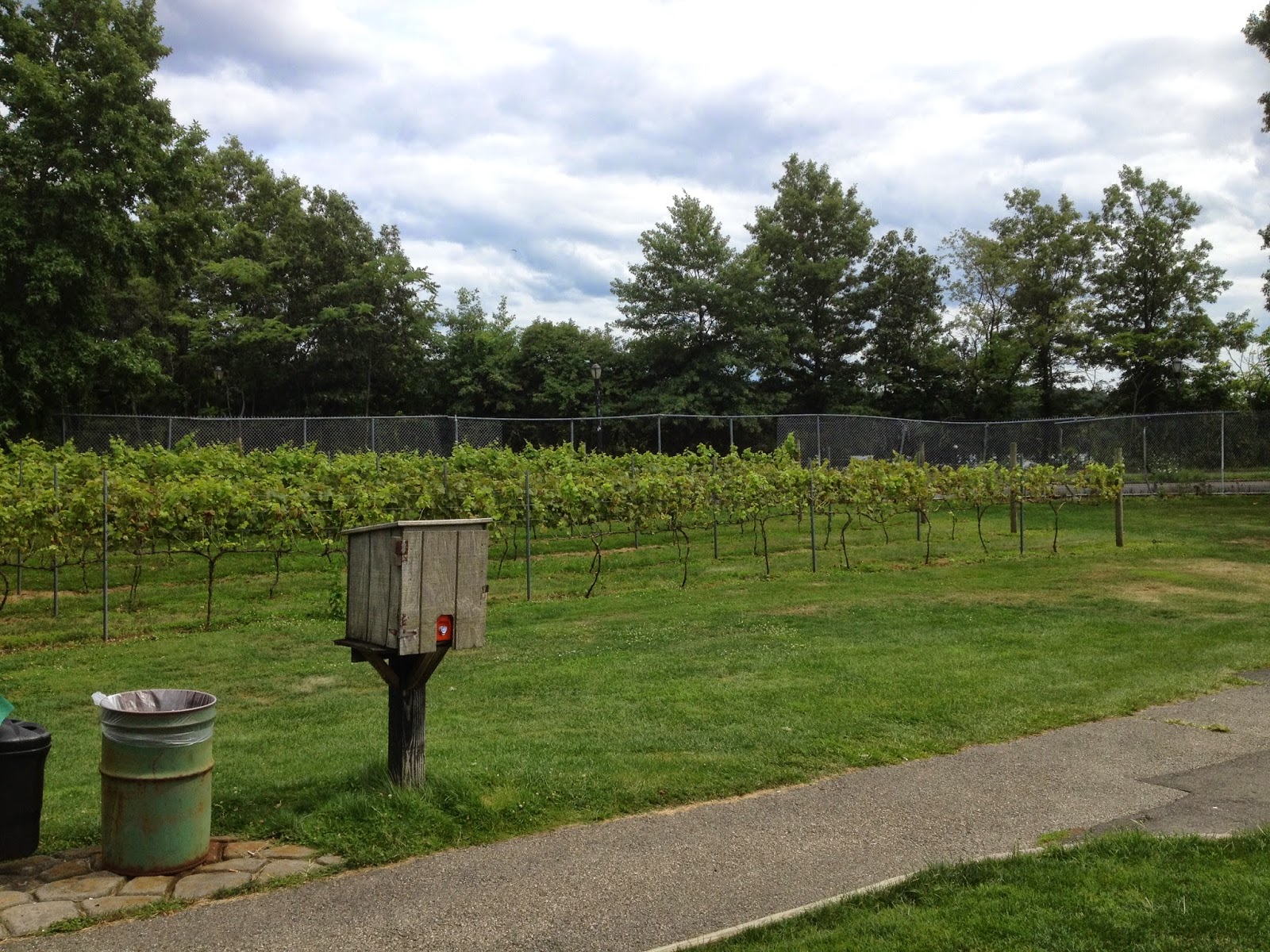 Since I was playing with someone who seemed to know all about this course and everyone on it I tried to suss out once and for all what's the deal with all these grapevines growing along the 4th and 7th holes. Apparently these are actual grapes, which are somehow used to make actual wine, Skye Dog, named after the course's resident Border Collie. 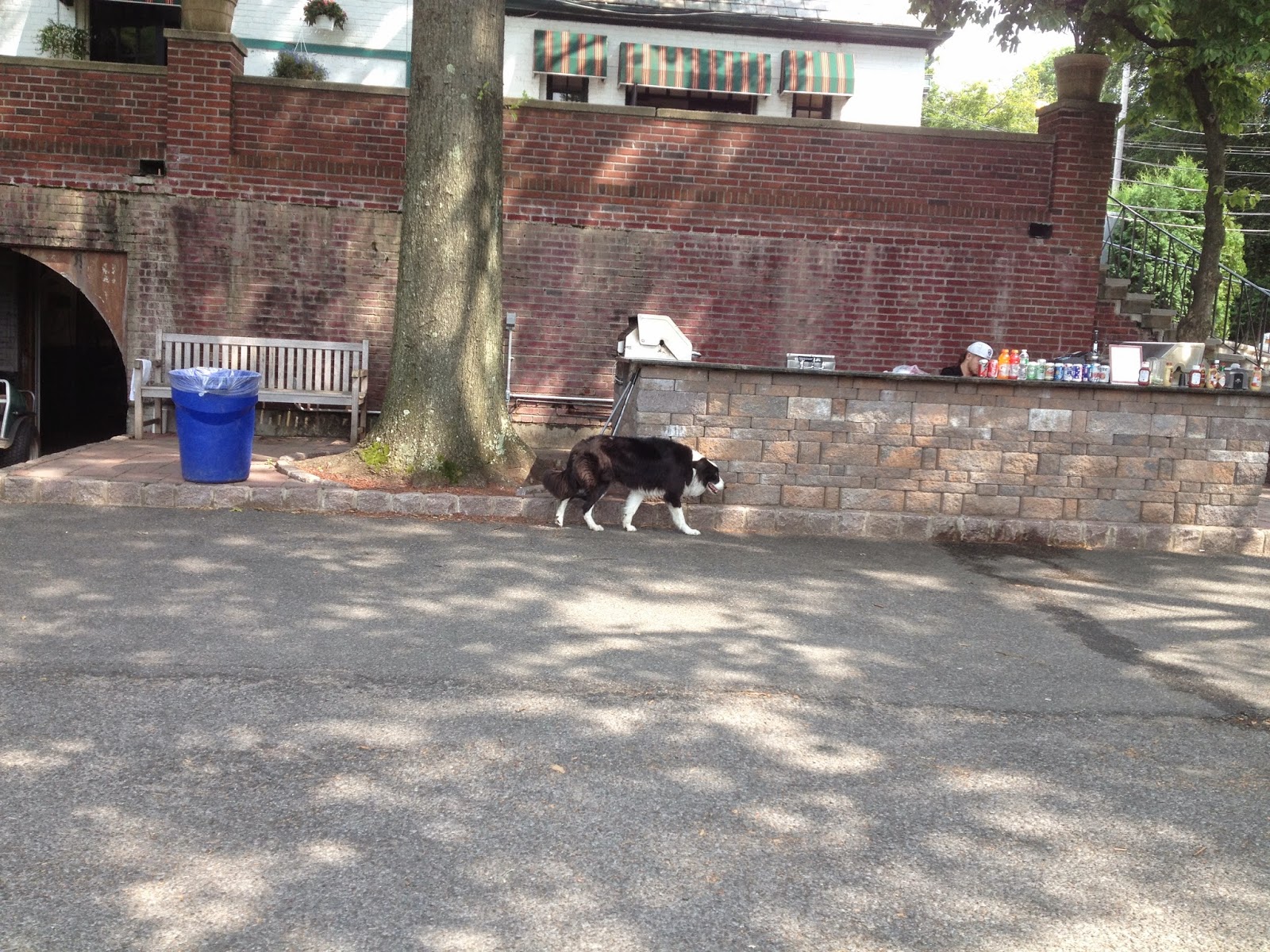 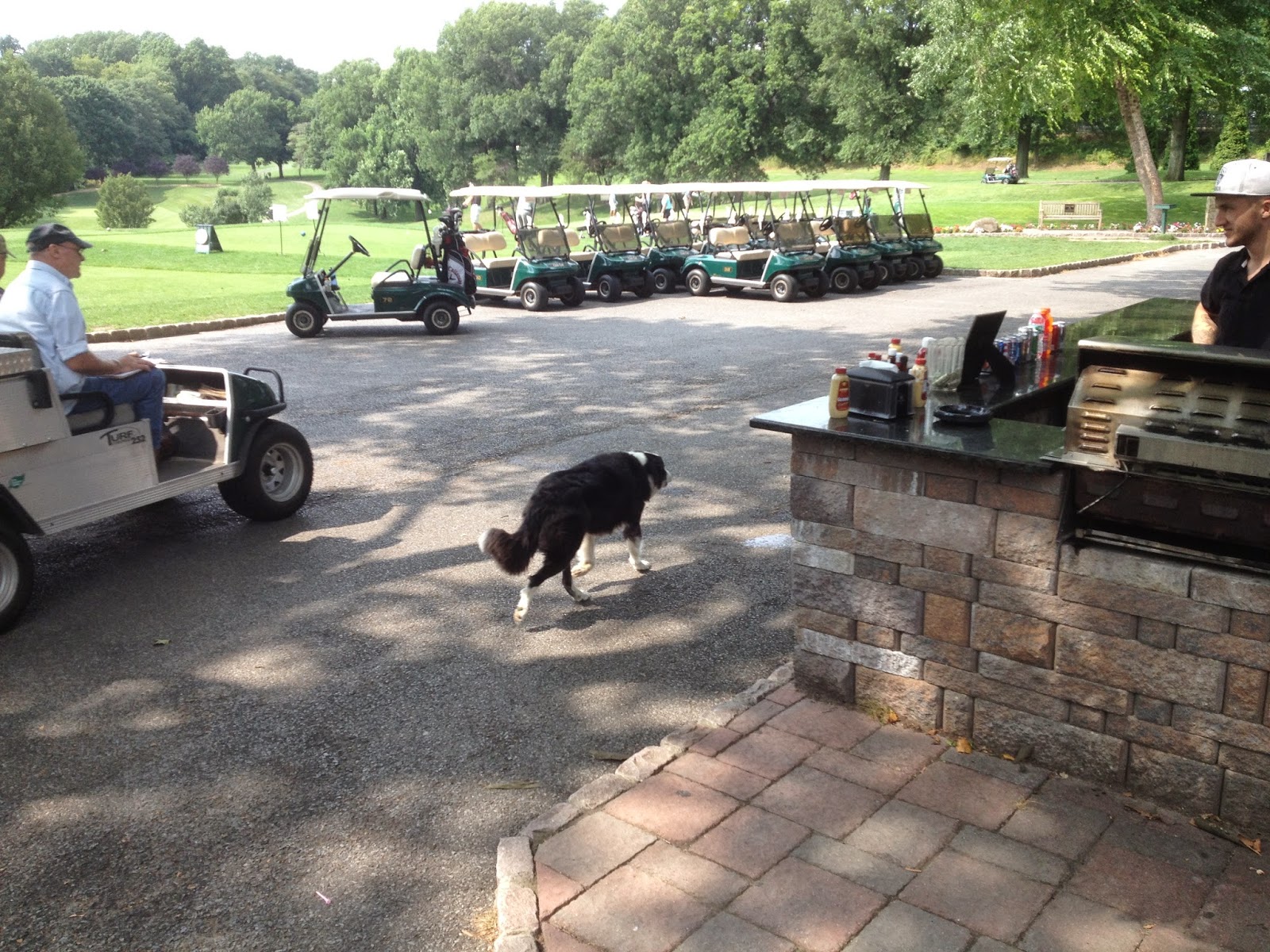 Here's the man himself hanging about the first tee. People say hi, but like a good working dog he seems to keep mostly to himself. Here's a nice local news story on him.

Rough start for me today--double on the first then a triple on the third--and that kind of derailed my plan of breaking 80. But after that I settled into some steady preteen handicap golf and finished at 84. Still having some ballstriking consistency problems, but I am now putting with a vicious sense of purpose at least. I shored up a few things I guess. Still wacking a few long putts past the hole though, but inside of twenty feet I have that old deranged confidence again. 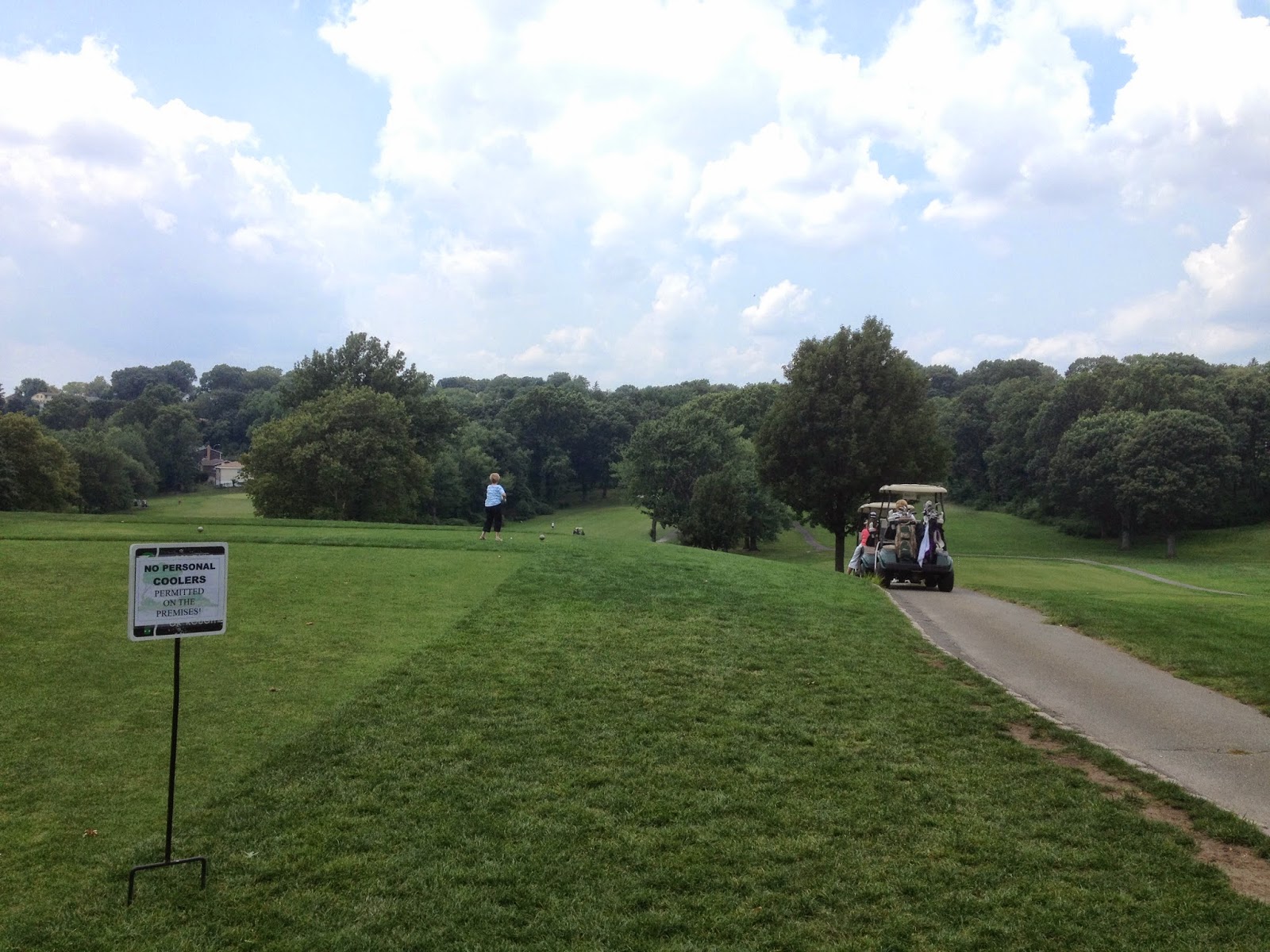 The next time out, another locals experience but this time a lot better. Still, I got caught behind an old ladies' league, at least twelve members strong. None of them had any idea of how to hit the ball, but I noticed several of them sporting new-model white Taylormade drivers. 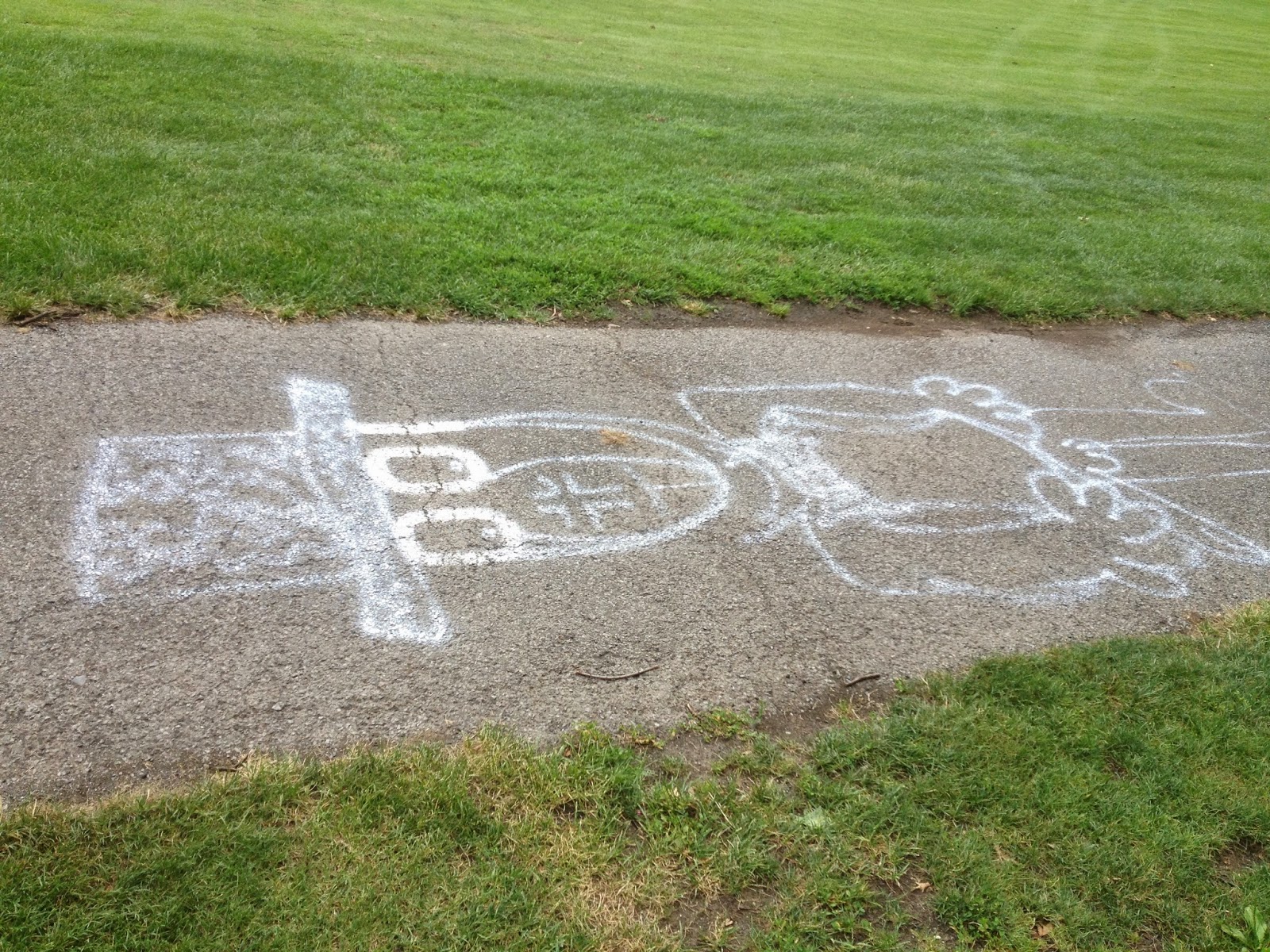 Since I was here last someone had vandalized the cartpath, obscuring the all-important 100-yard marker. 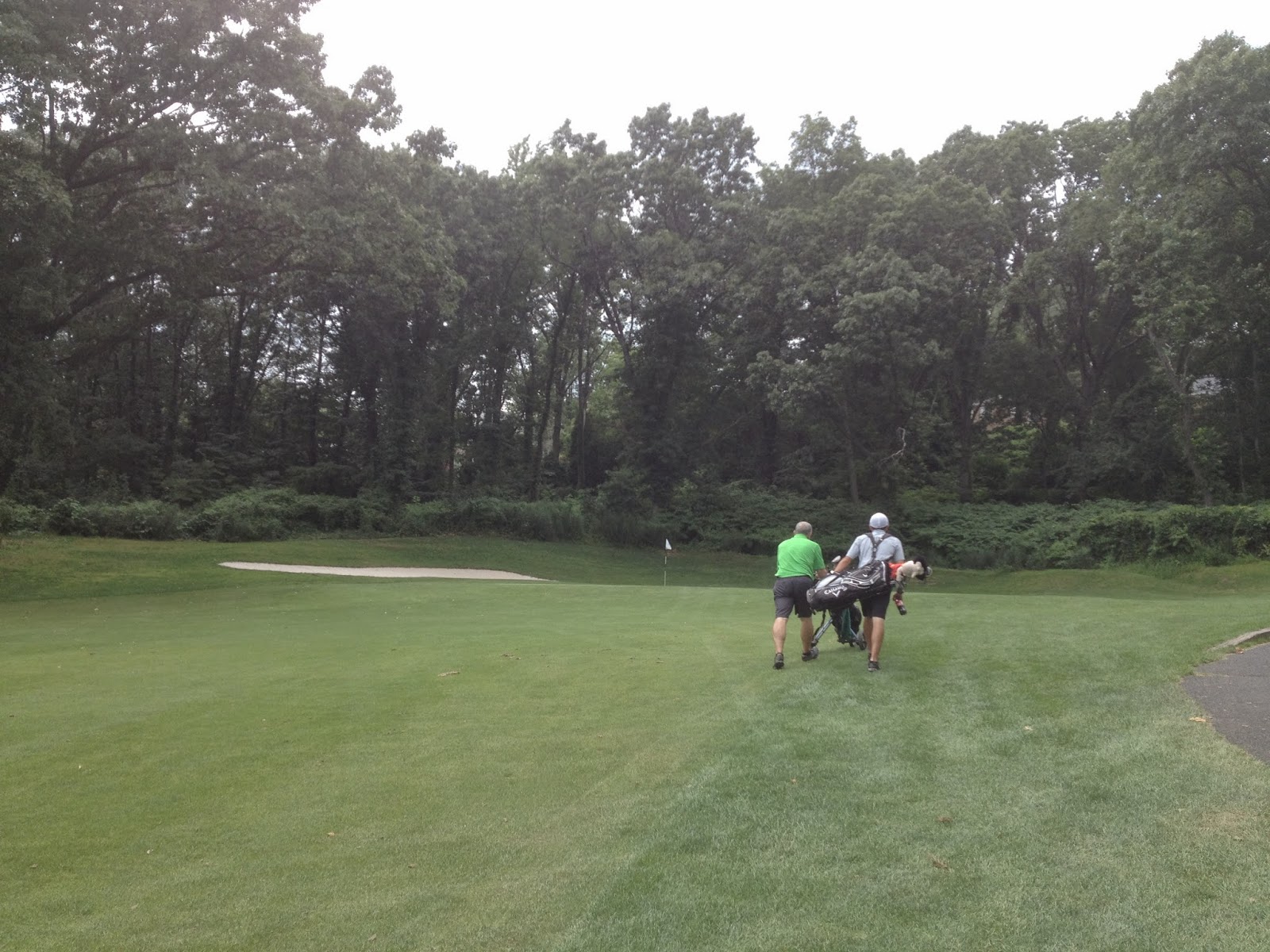 I was grouped again with some island natives, but of a very different sort--respectable middle-aged guy and teenage son. Their decent golf games, general normalness and easy natural rapport between them were such a relief from the usual stew of dodgy attitudes and personalities (my own included). 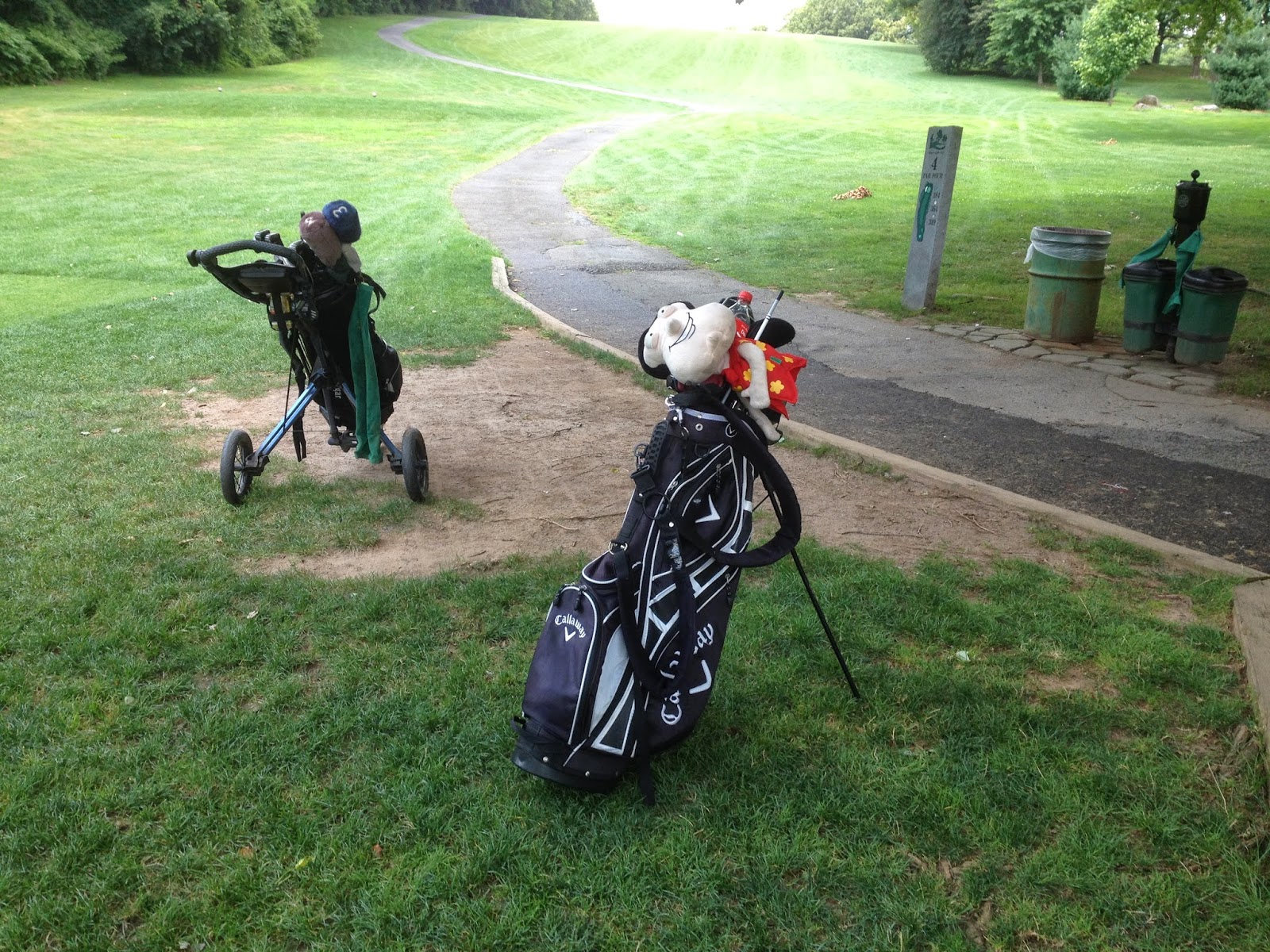 Son is evidently a fan of coarse animated humor. 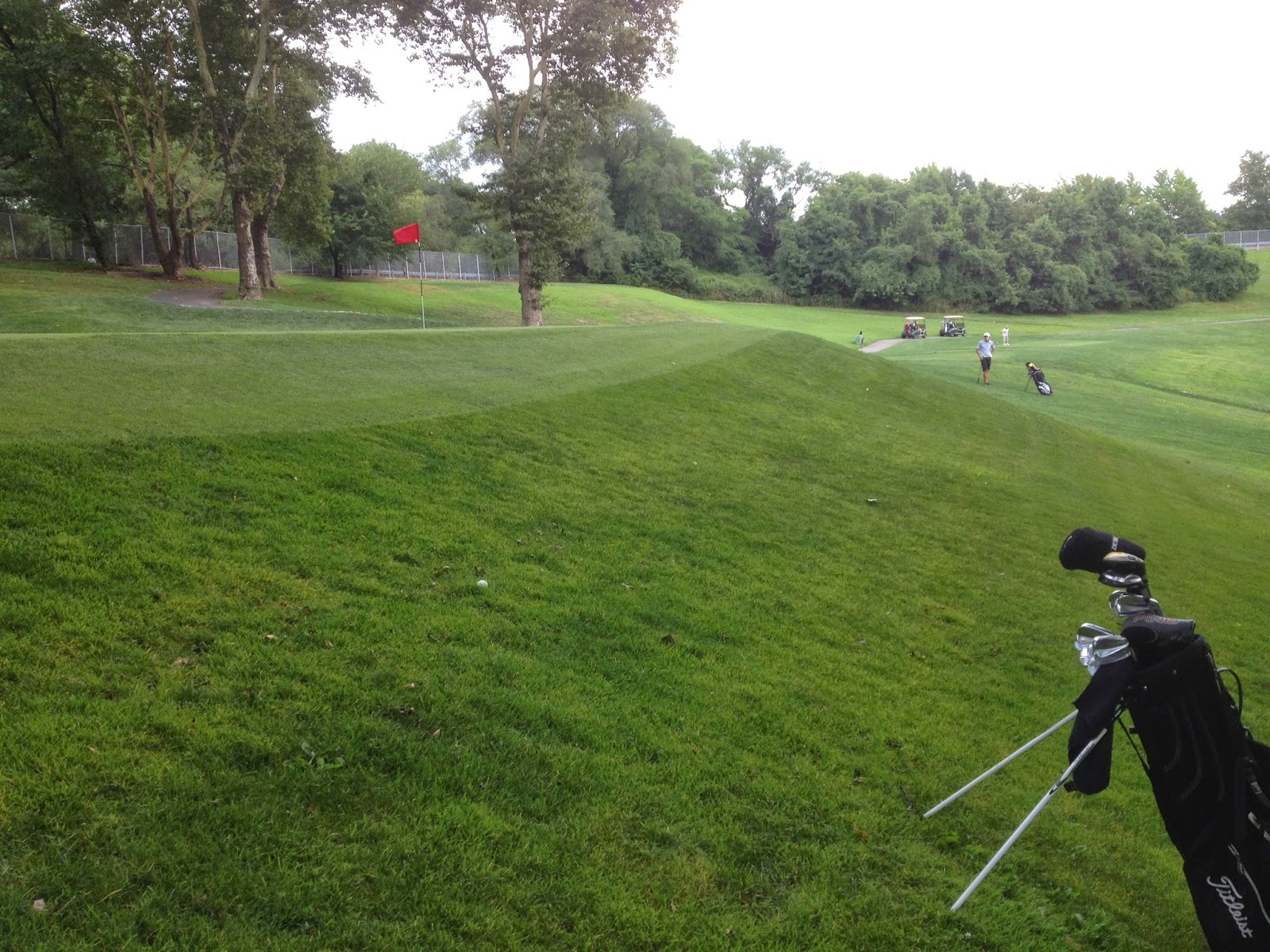 At the par 3 6th, this front slope doesn't look too bad here, but when you walk up it, it feels like a goddamn sheer face. 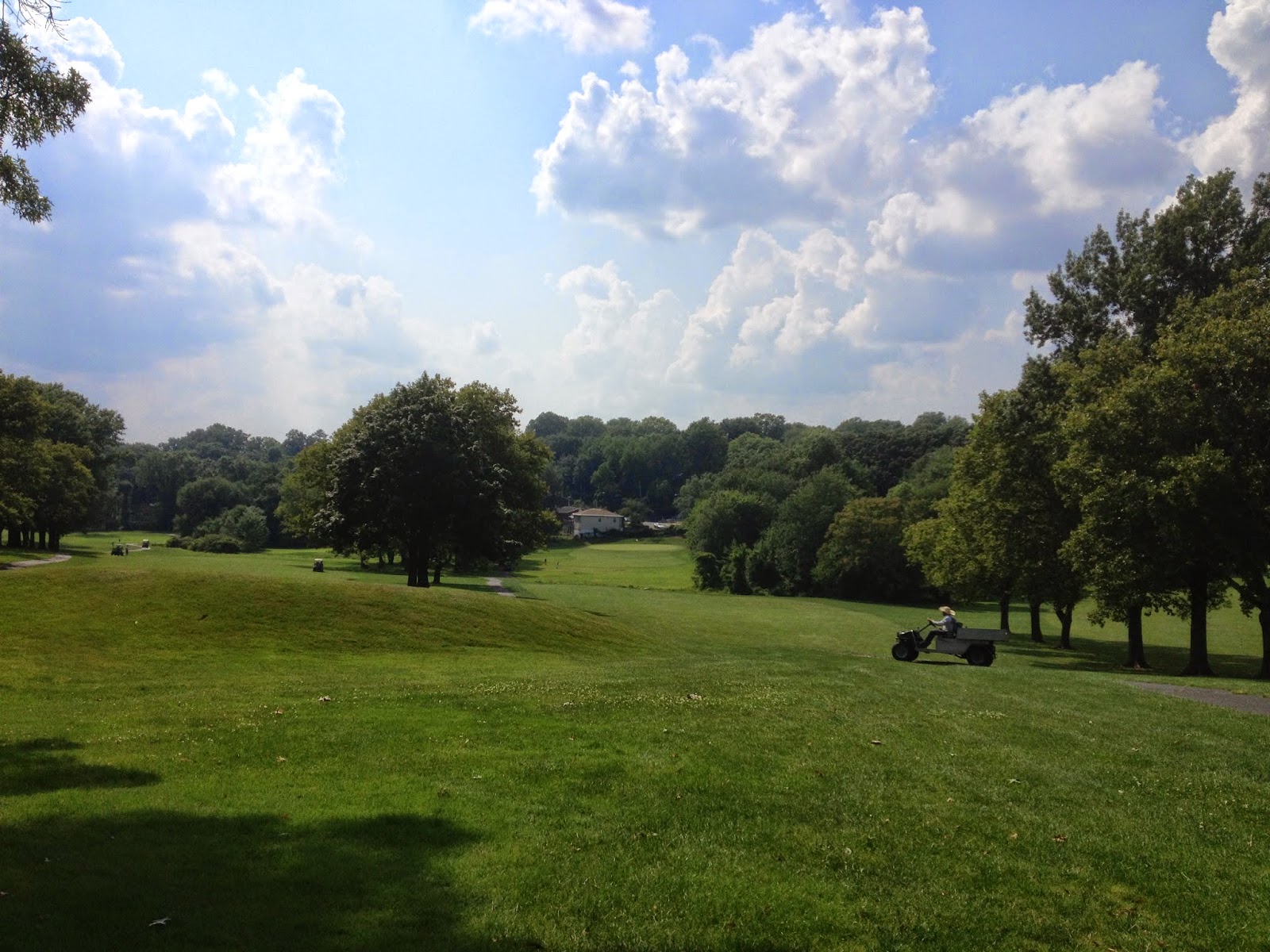 Here's how you hit the best fairway wood shot possible, as I did on the 10th. With the group ahead still on the green and yourself just a little outside of realistic range, shooting uphill, a little headwind in your face, with no realistic expectation of reaching, just go ahead and hit it. Be prepared though, to tiptoe up to the group with hat in hand and a profuse apology ready to go. 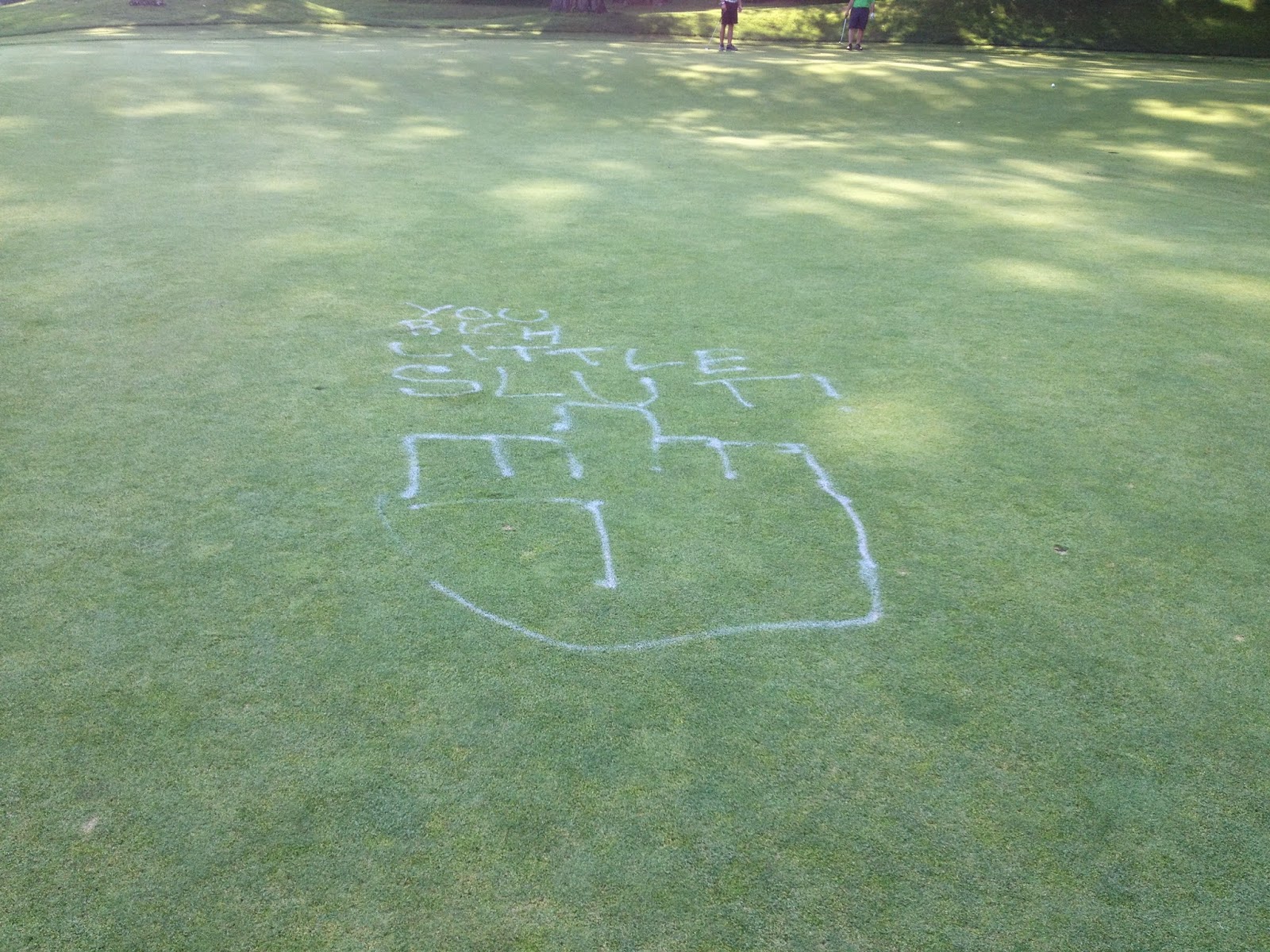 More unsolicited artwork, unfortunately on the green this time. It reminds of the time someone spray-painted "GOLFERS ARE FAGS" on a Dyker Beach cart path. I am confused here. This one reads "You rich little slut!" which comes off more like some playful inside joke than a nasty slur, which I thought was the whole point of word-based vandalism. Even if this was meant to hurt feelings it misses the mark, by a lot. This is a Staten Island muni course in 2014. You are no more likely to encounter "rich" people here than at say a midtown Dunkin Donuts. Also I don't have to tell you that golf enthusiasts are not typically known to be sexually promiscuous (or homosexuals for that matter). Thus this supposed statement actually leaves the viewer with more questions than answers, and little to no actual hurt feelings. Chalk it up to poor communication skills. It's oft-discussed these days and I finally believe it--our education system is truly failing us. 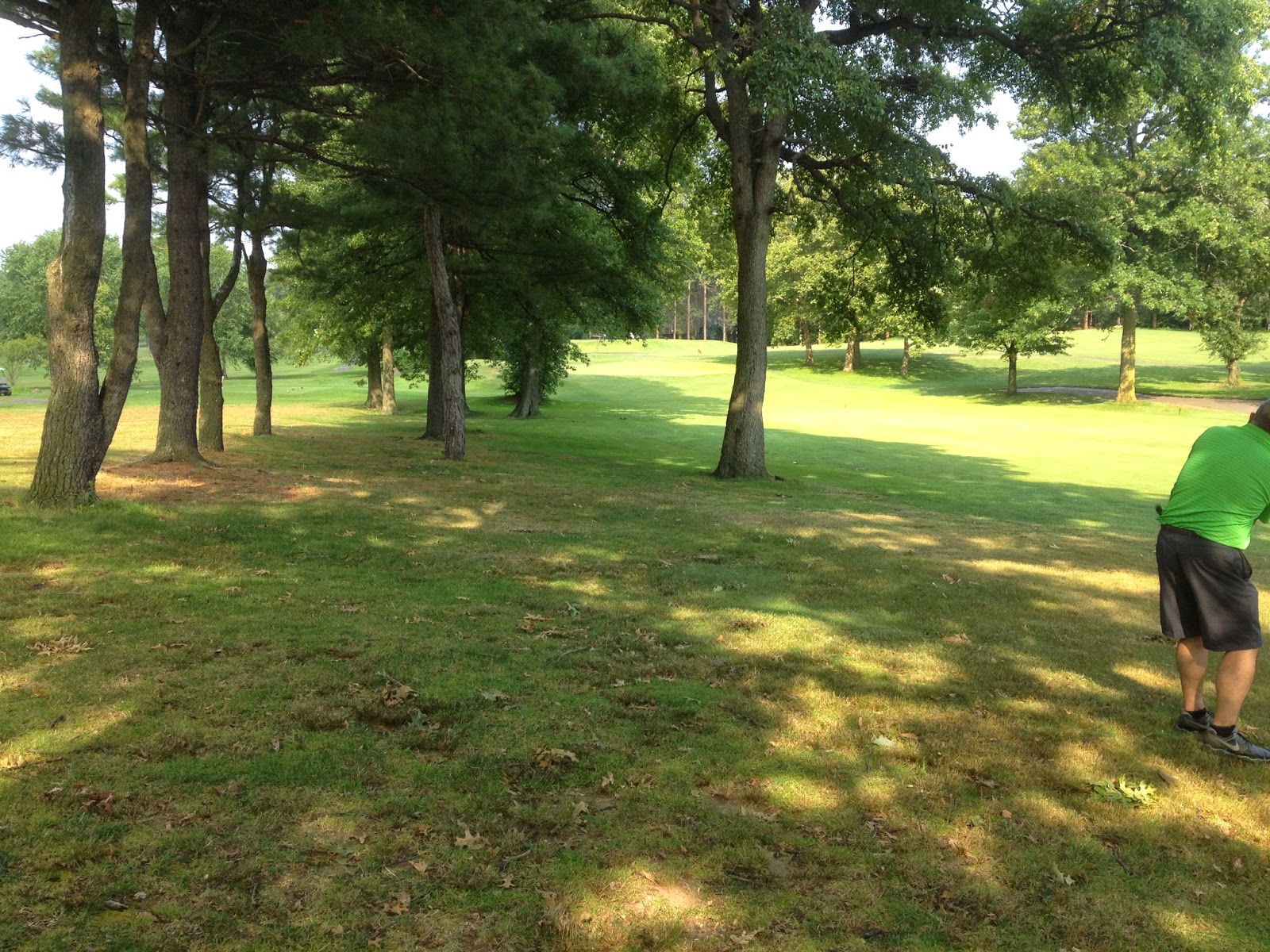 I actually managed to punch a low cutting 3-iron onto the green from here. Yay for me. 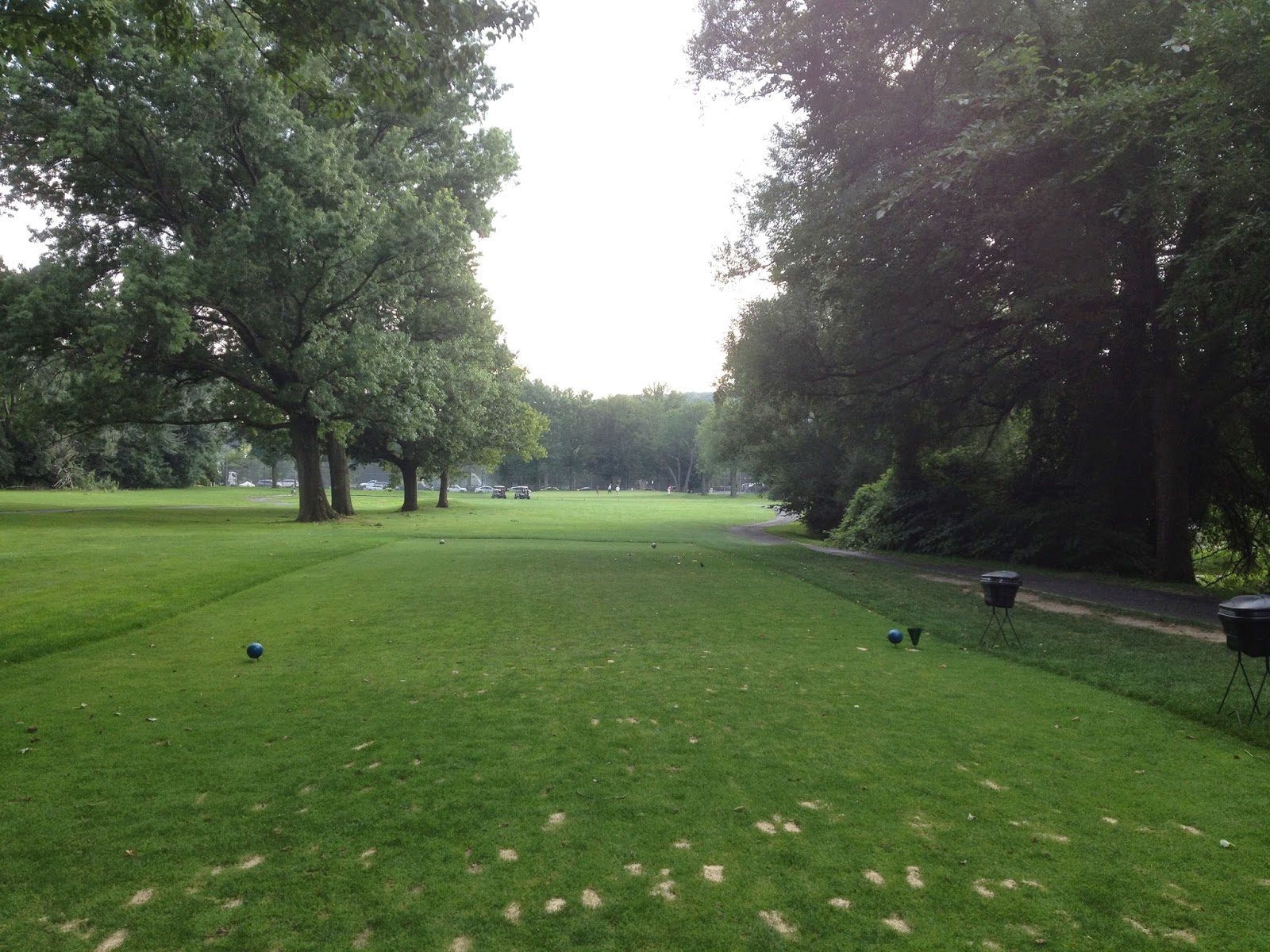 Extremely narrow 216 yard 16th hole. Not a comfortable shot at all. Somehow this course has a cupcake slope of 116, yet it has never seemed easy to me. If you don't hit it straight here you will be bitching and moaning. 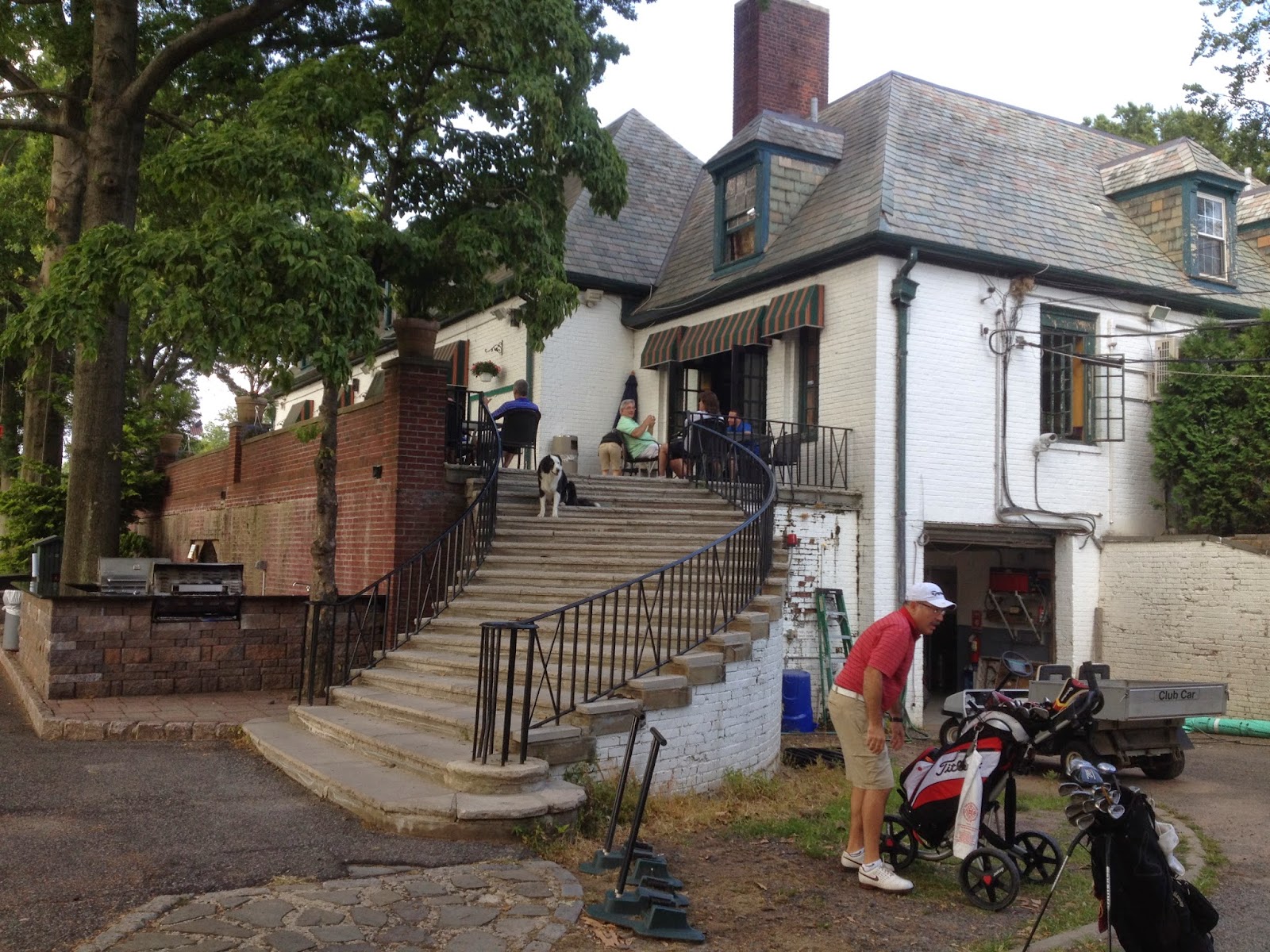 As we came off 18 there was Skye taking it easy at the end of the work day.

I played about the same I did as last time, but maybe a little steadier. I made one really huge number though, a quintuple bogey schlock-horror show on the fourth hole after I hit a driver so deep into the woods that trying to exit in any direction was asking a lot--I wacked three different trees trying to get out. Other than that it was the same kind of scratchy, if steady pre-teen golf with some unnaturally good putting again. Again, I feel like I'm sprinkling plenty of decent play all over the place, but alas it's sloppy and uneven. Bonus photos! Feel free to print out and send as postcards. Here's a slightly different look from aboard the homeward bound ferry, looking southeast at the massive Verrazano-Narrows Bridge, a familiar sight at Dyker Beach. 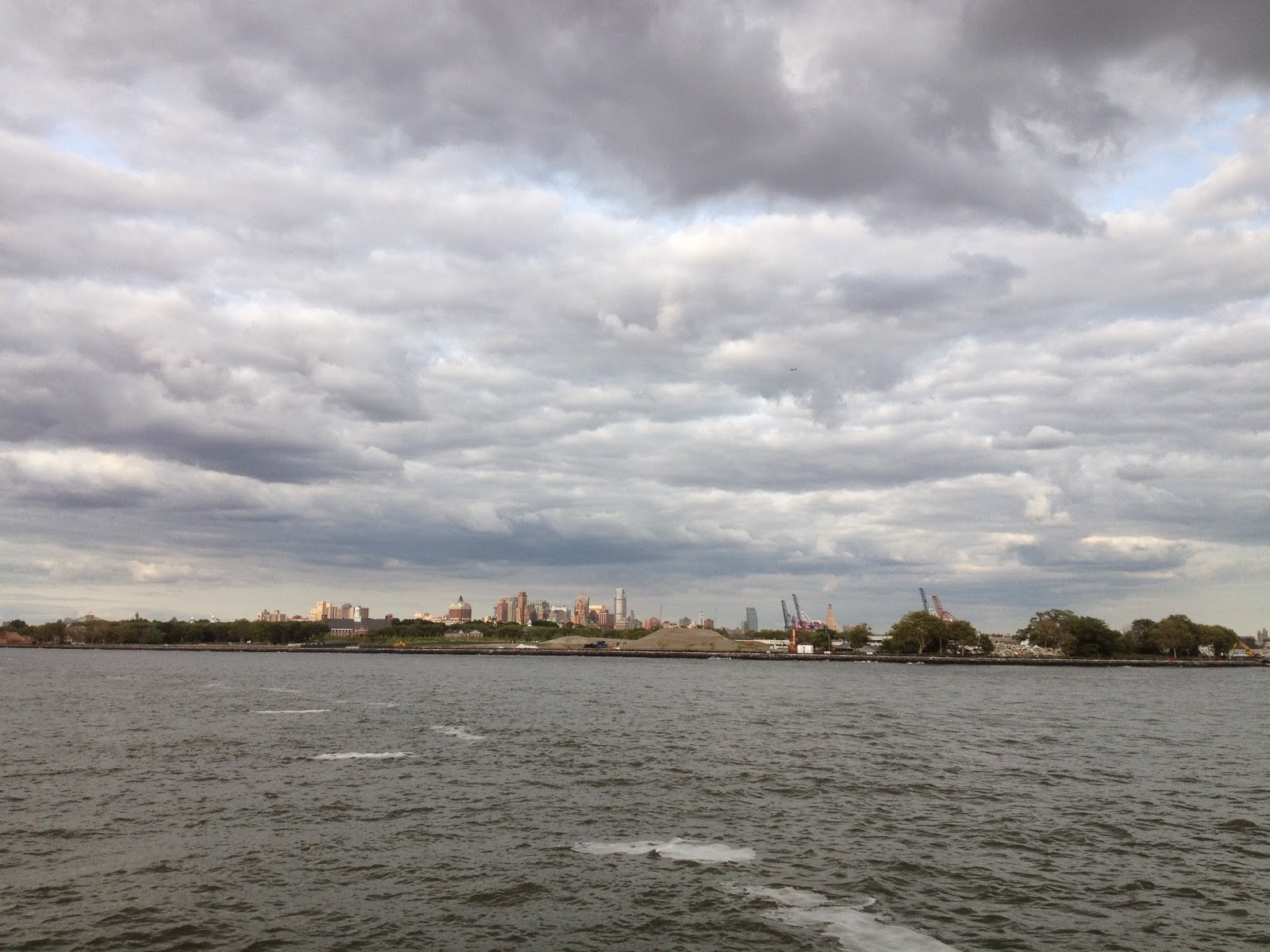 Governor's Island, with downtown Brooklyn in the background.
Posted by Legitimate Golf at 6:23 PM