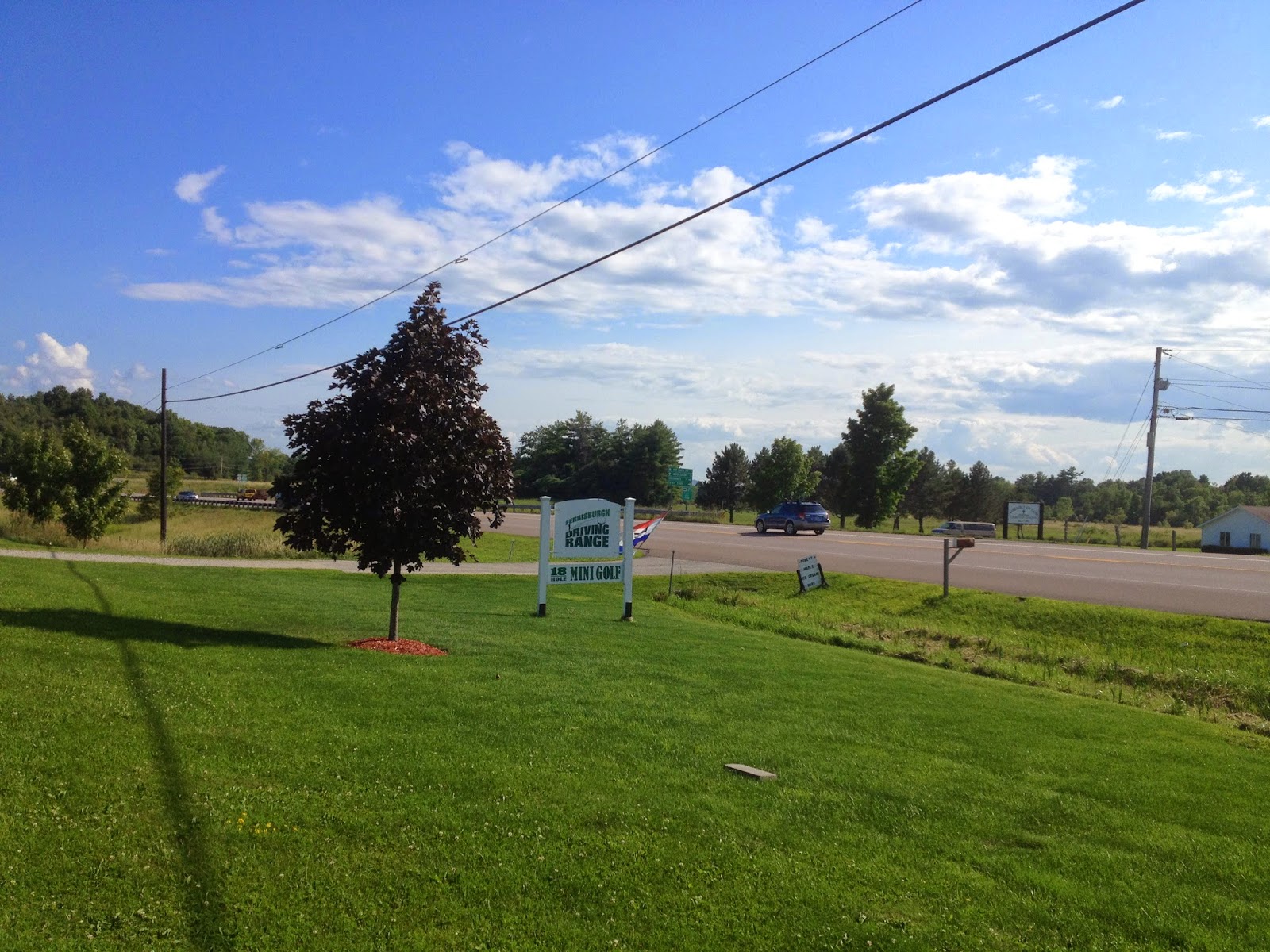 Greetings from the road again. This time the path has taken the Legitimategolf crew to the Green Mountain State. It's our first time here, and this really is a magical place exploding with maple-covered hills and verdant pastures the likes of which these city-eyes have never seen. No wonder Vermont is forever associated with cows and dairy--this is a goddamn wonderland of grazing. 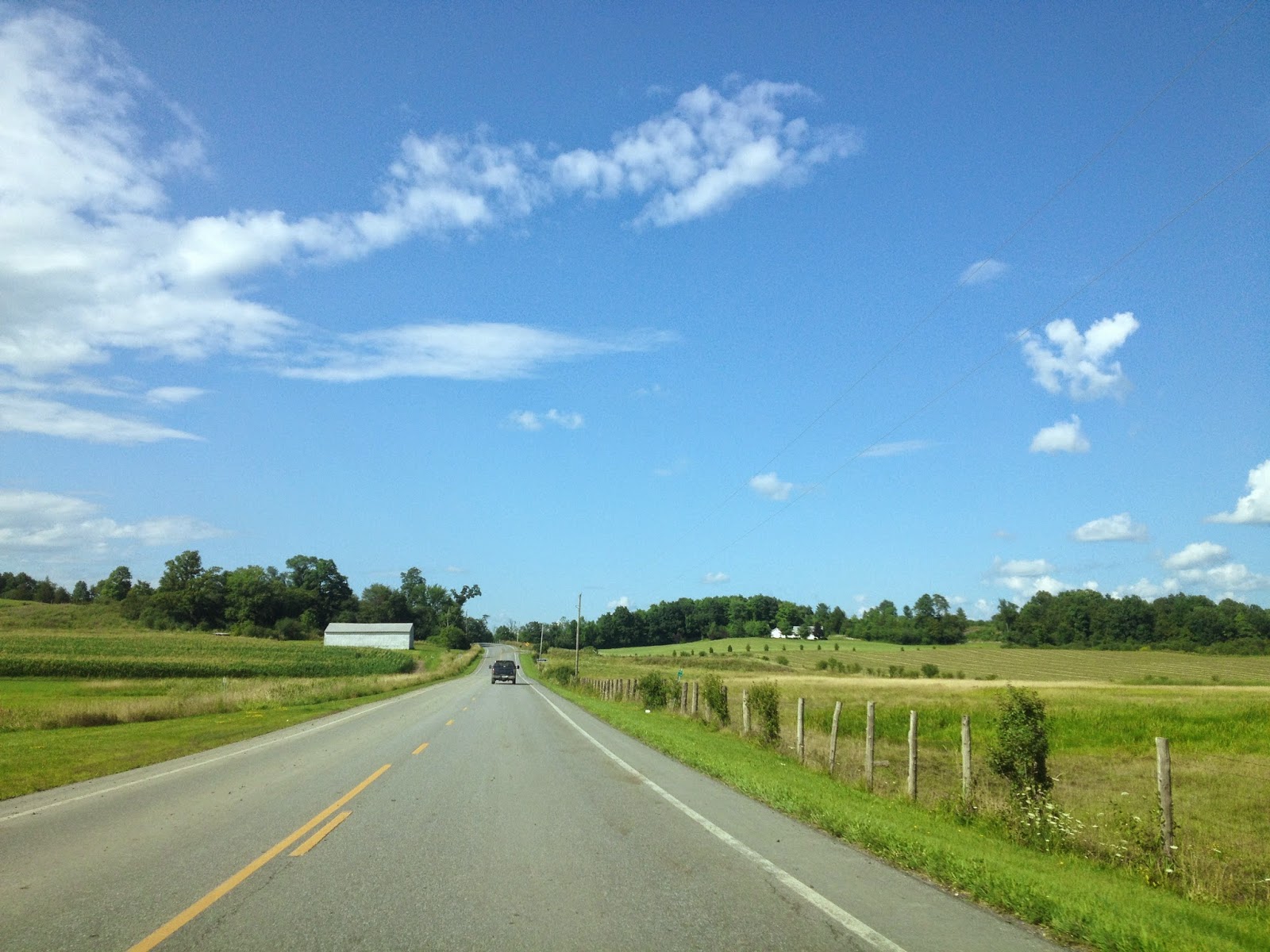 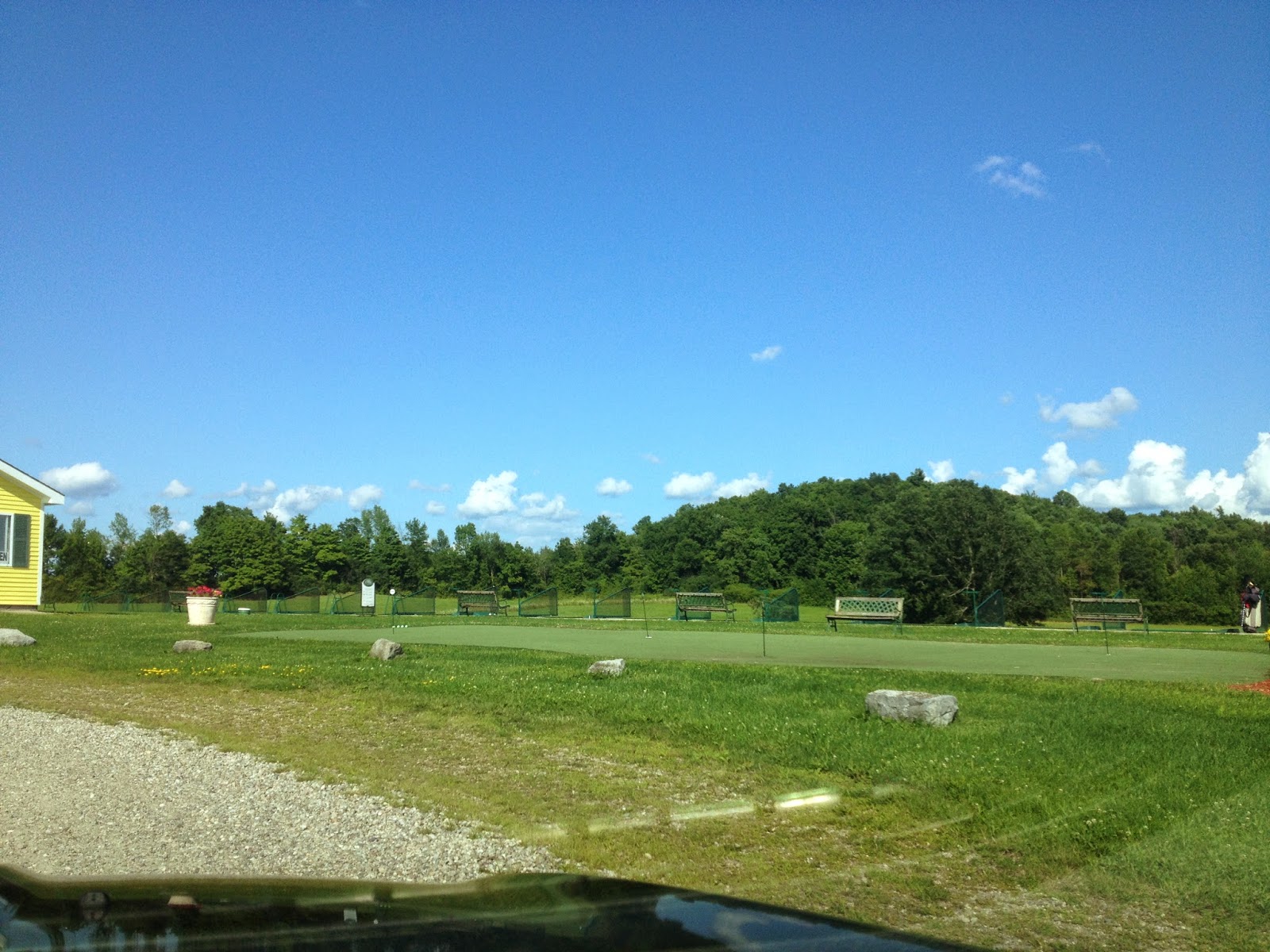 Our initial destination today was Burlington. But with about a half-hour left to go, driving on the scenic, rural U.S. Route 7 we spotted a sweet little roadside driving range and 18-hole putt-putt, charming as so many of the farm stands you see around this way. After about a quarter-mile of hemming and hawwing (on my part mostly), we flipped a u-turn to go check it out and hit a bucket. 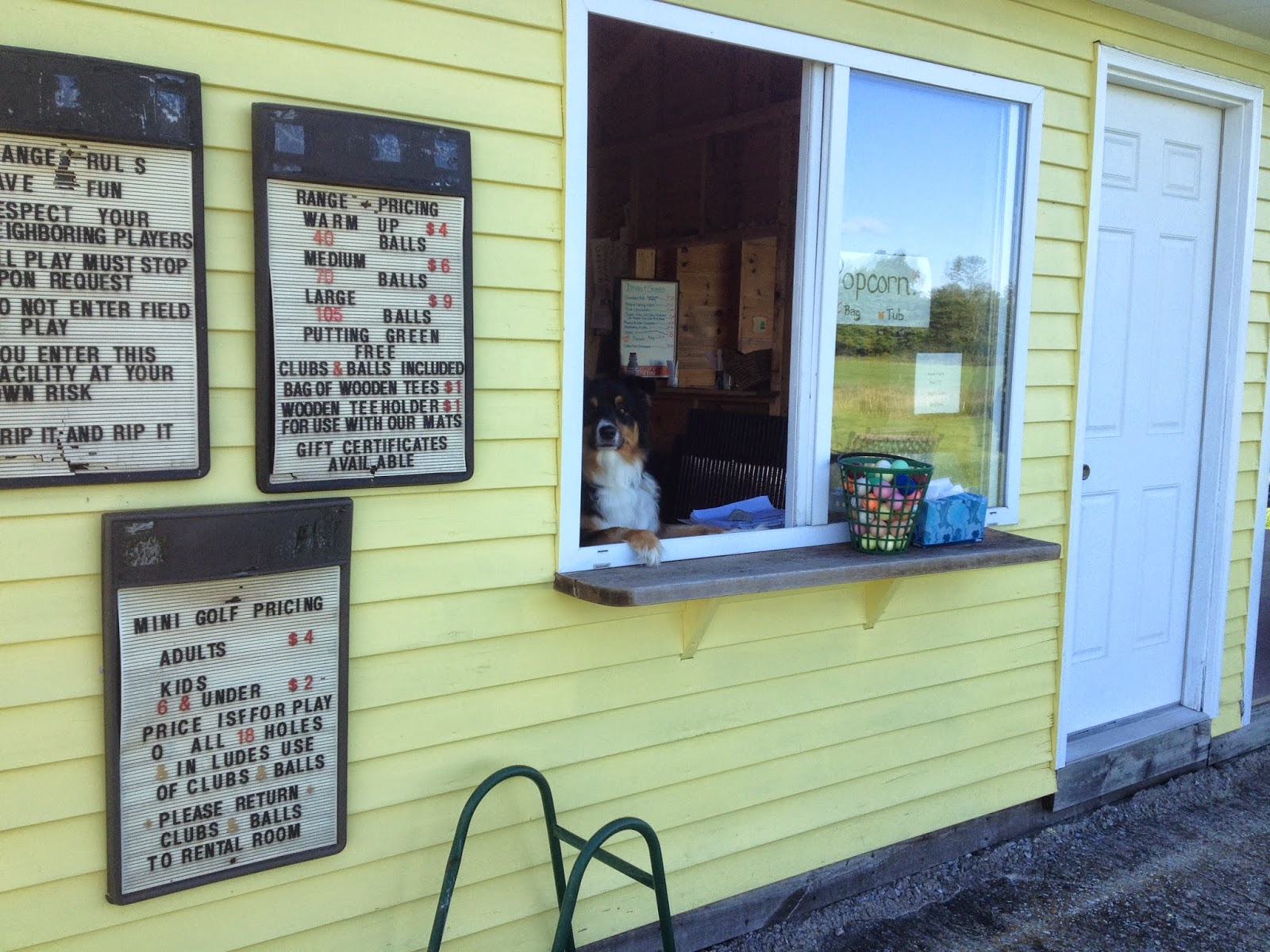 We asked if our mutt Ringo could come out and watch us hit. The answer was yes, but of course. We are finding out that Vermont is not at all uptight about dogs--unlike some degenerate, ass-backward metropolises I can think of. 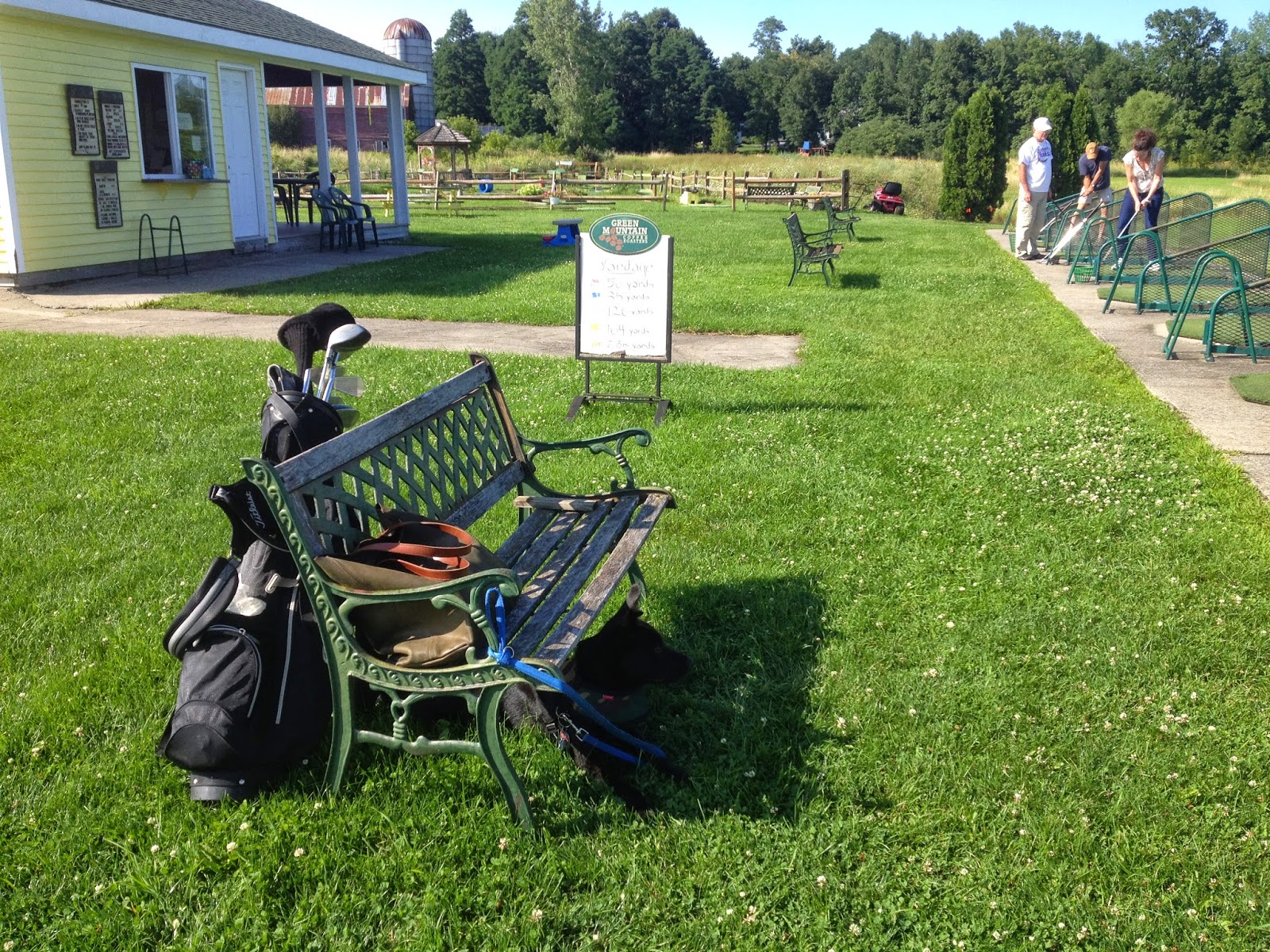 Ringo has watched me make hundreds of thousands of practice swings at home, but he still needs to get used to the sights and sounds of actual balls being hit. Poor guy--I know he just wanted to sprint out there, chomp on some golf balls and do donuts on the grass. 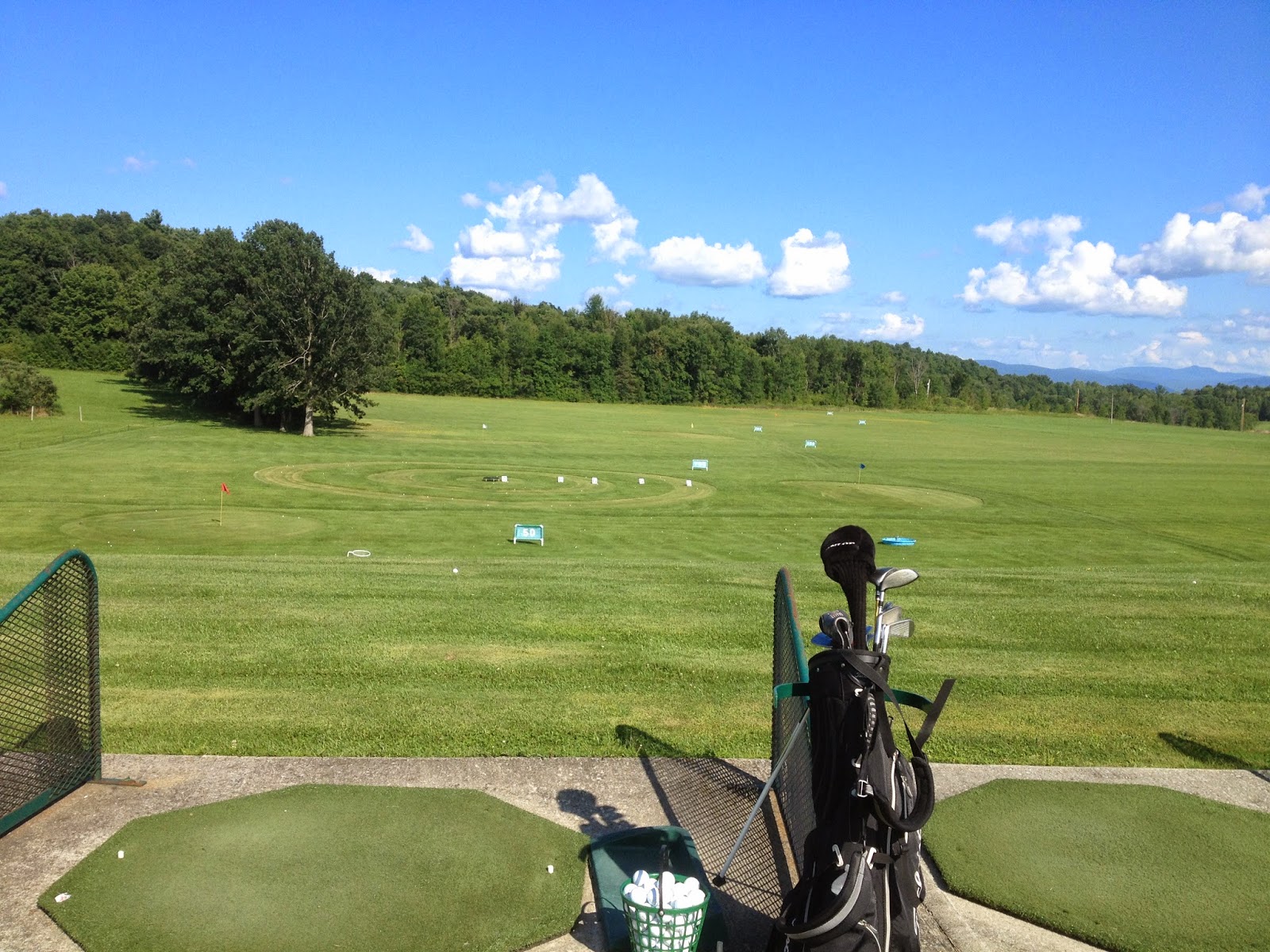 For someone who is accustomed to hitting balls inside of fenced-in enclosures, the view is incredibly liberating. 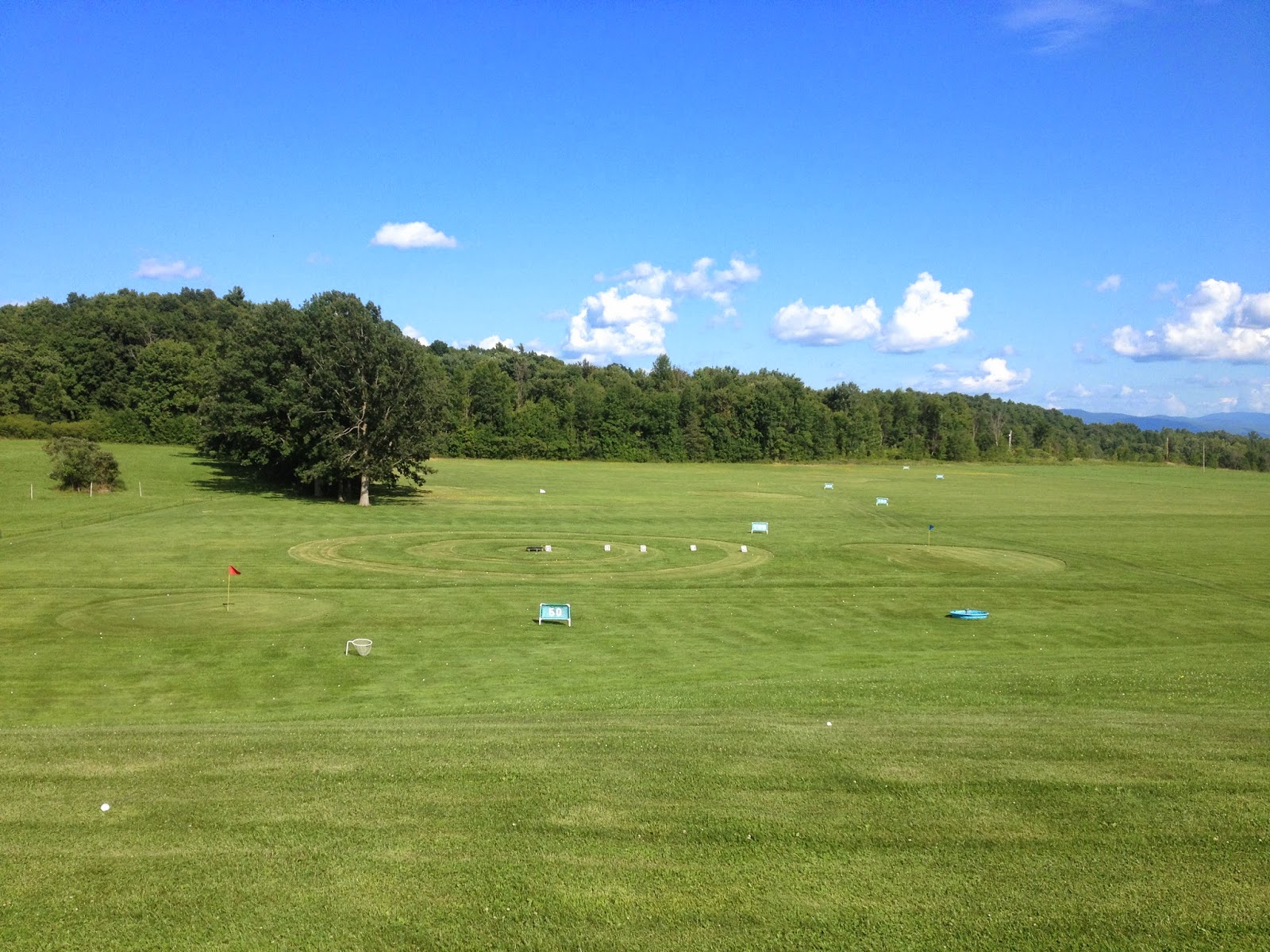 I could not get over the genius of the archery-style target, centered around 80 yards out. We spent most of our balls shooting at the bull's eye, wherein lay a trampoline. We weren't lucky enough to hit it today, but I imagine it is pretty awesome when that does happen. 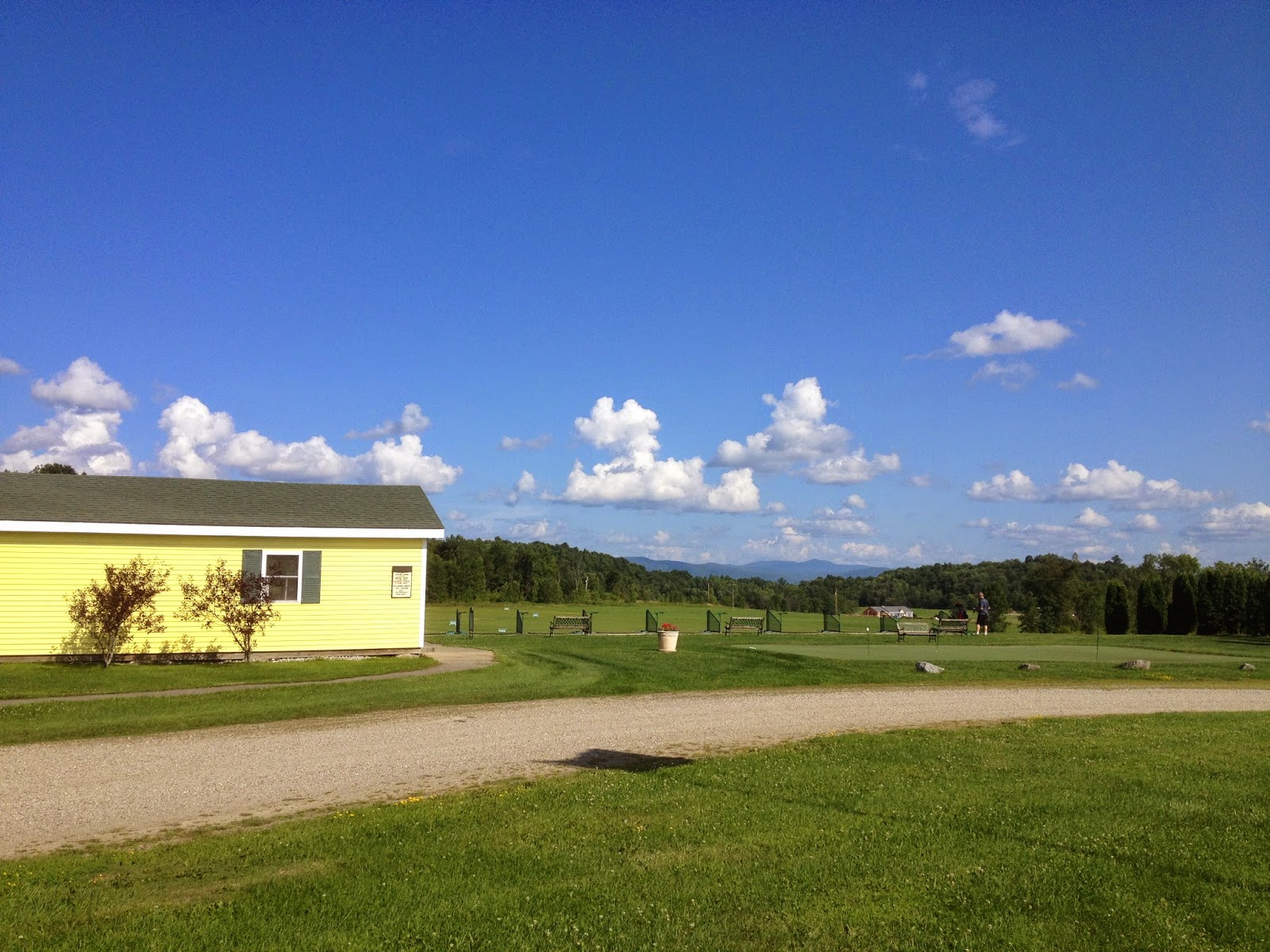 It is a dead simple, bare-bones facility, but some golf places just have "it". I could hit balls out here for a really long time without getting bored. The concentric target is such a winning idea it actually makes me feel sort of sad that all this time I've been deprived of such ordinary joy while hitting wedge shots. 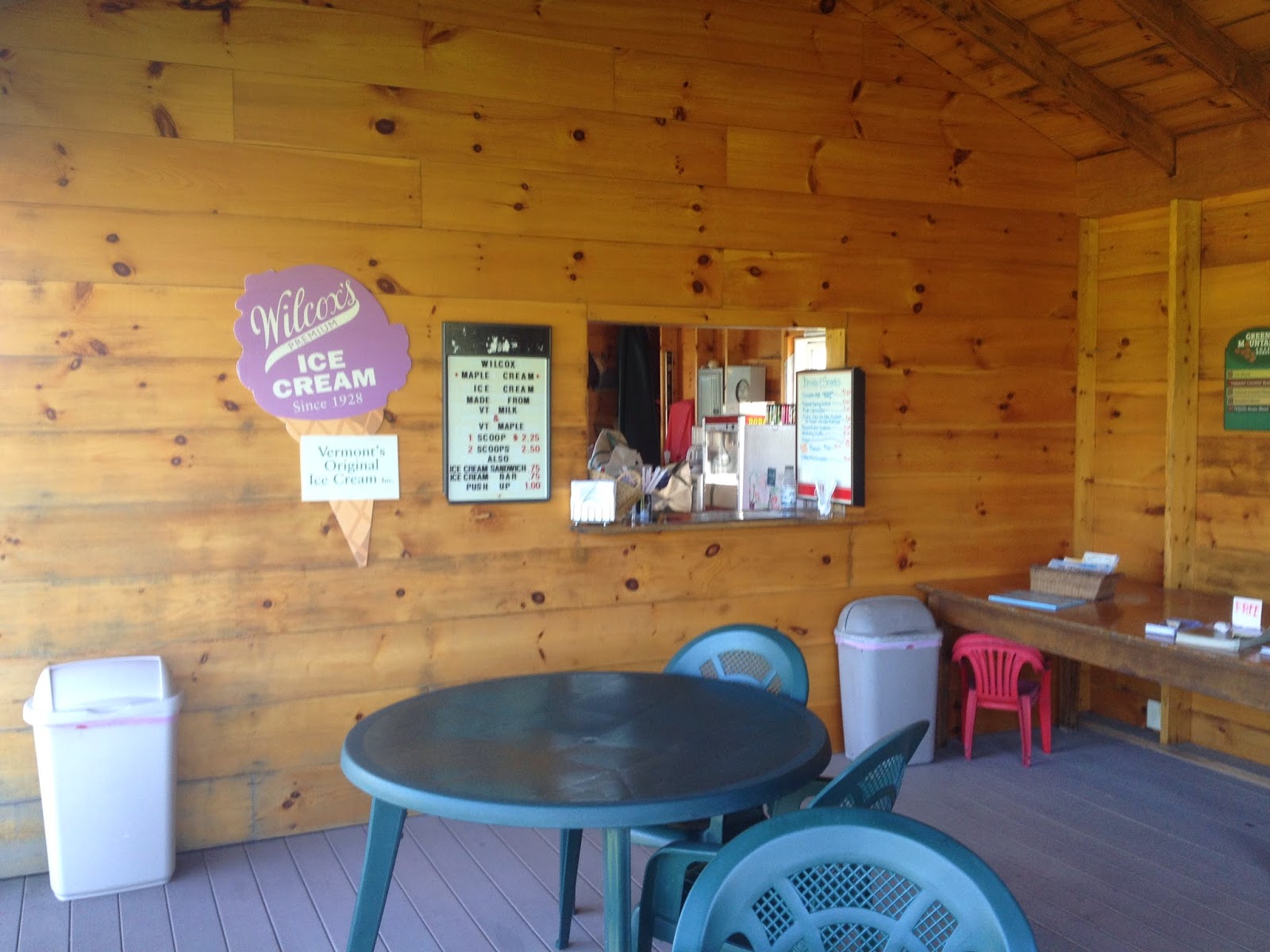 Most driving ranges sell shitty junk-food snacks. But how many sell locally-produced ice cream? (Ice cream and maple syrup in Vermont are like slot machines in Vegas--they are found just about anywhere.) 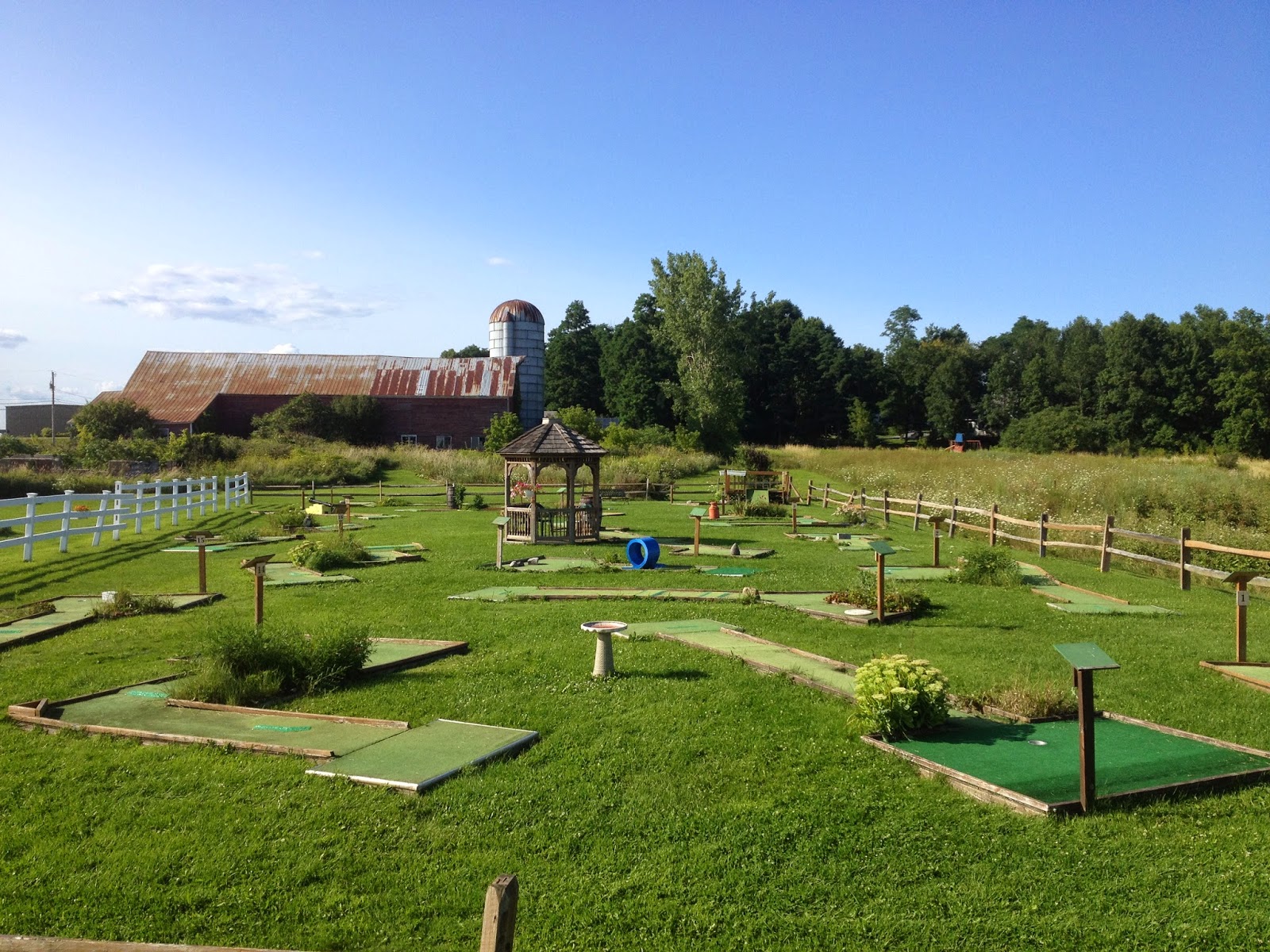 Ms. L and I split a bucket; I hit a few but mostly just kind of gaped around in awe like a pathetic city lifer who's never really seen farmland before. But what the hell, I really was taken with the whole experience. At this point I can honestly say that Ferrisburgh's is nothing short of the greatest driving range I have ever set foot upon. Bummed that we had to get back on the road.
Posted by Legitimate Golf at 8:41 AM