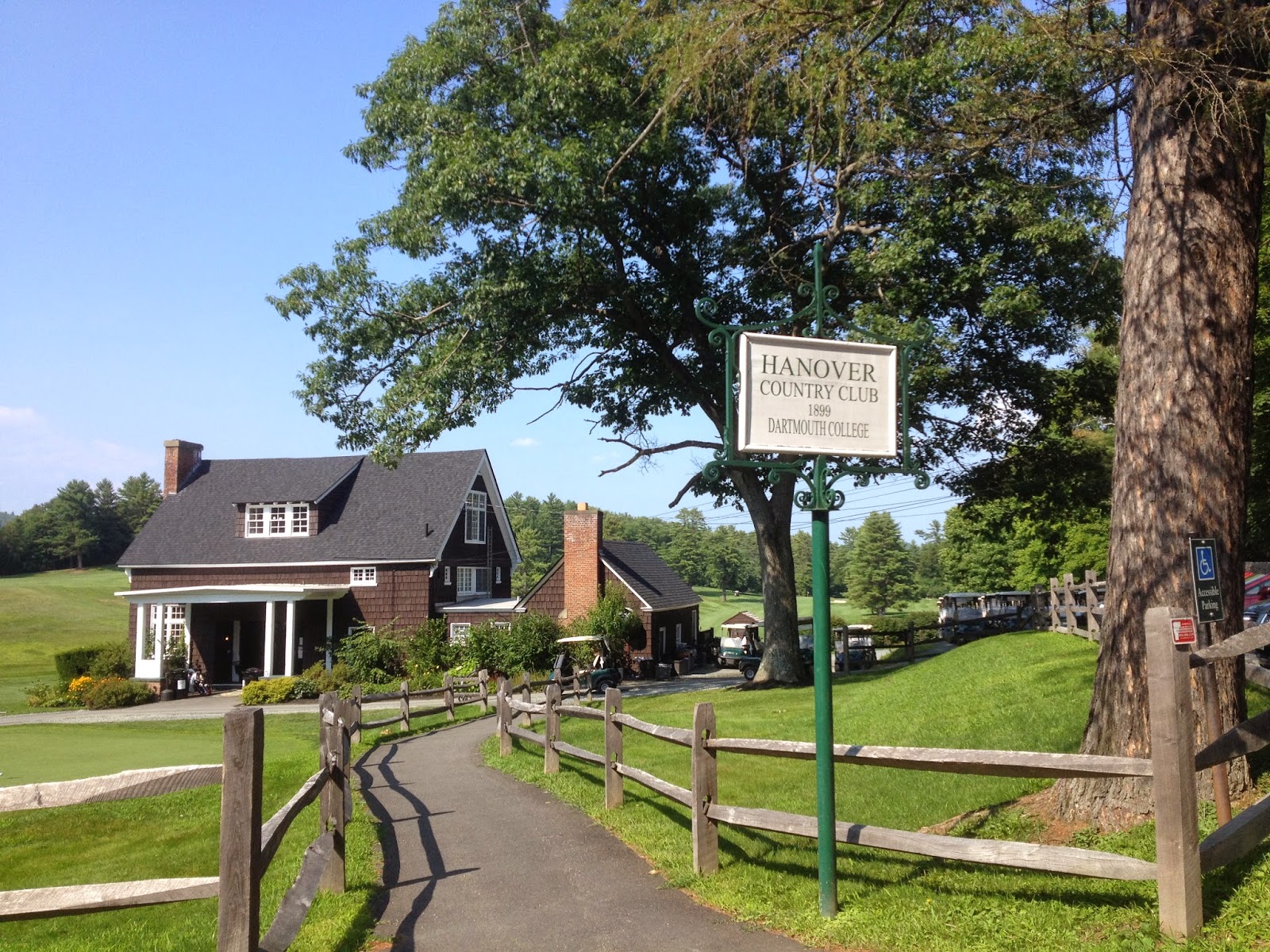 I never expected to wind up here in New Hampshire, never mind on the campus of an Ivy League college. But we're staying in the ultra-quaint town of Woodstock, Vermont, and the only golf course there--the RTJ Sr.-designed Woodstock CC--happens to be hosting a gigantic tournament today. Very disappointing, but at least the lady on the phone was extremely apologetic about it--that softened the blow a bit.
I snooped around and found the next closest public course was actually across state lines. Once I got over that mental barrier I realized that it was still quite nearby, only twenty miles away. (Out in the country twenty miles is still considered down-the-street neighbors right?) Even better when I called ahead they said it was okay to bring along the dog, as long he was domesticated of course. (The pro shop gal was very cool about it, even seemed to think it was a neat idea.) 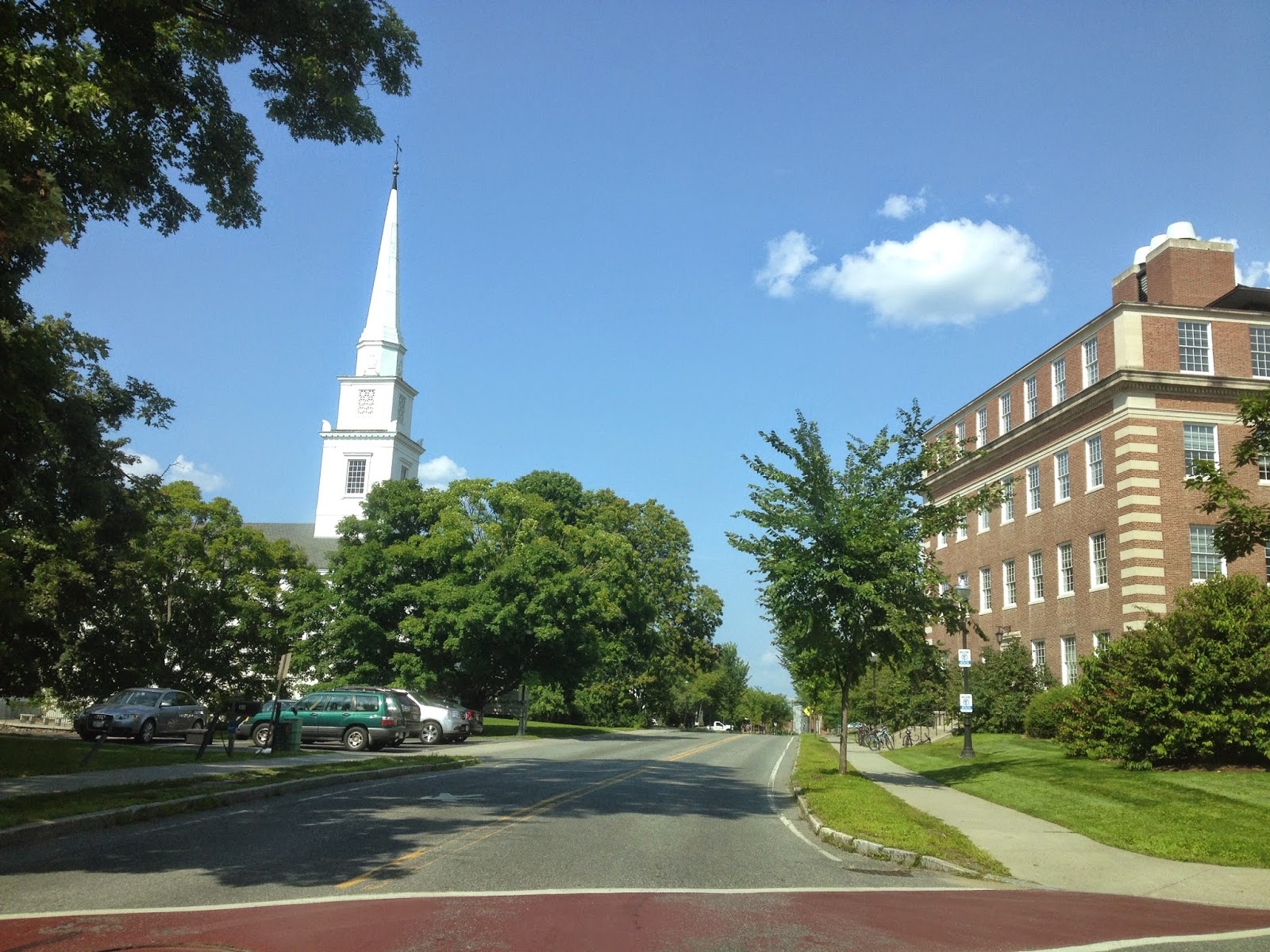 A semi-private course, Hanover is located on the main campus of Dartmouth. Naturally, it is home to the men's and women's Big Green golf squads. 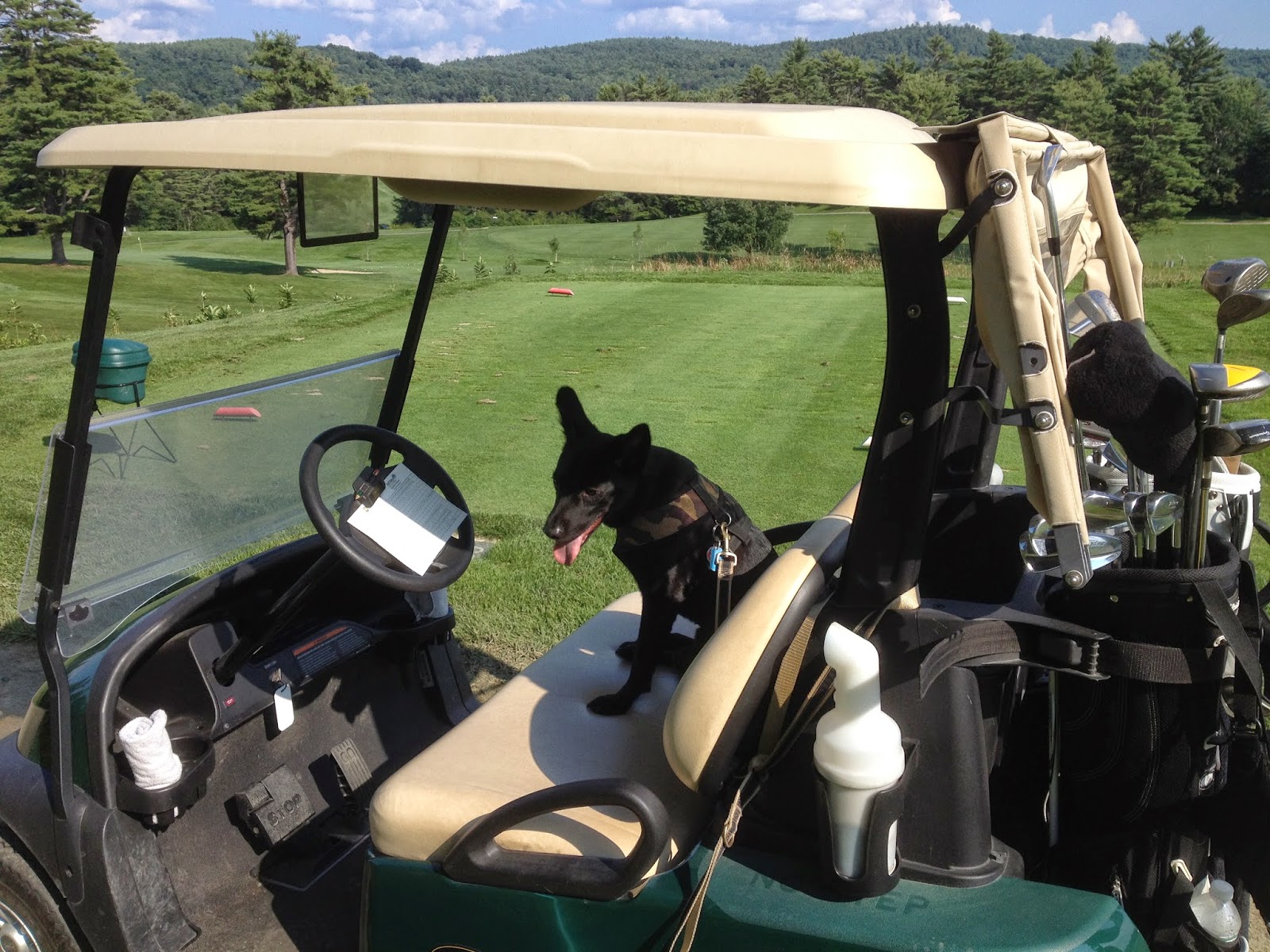 As I mentioned in the Ferrisburgh driving range post, Ringo is still a newbie. He's been to the range a few times but never on a course. We figured it might be a little stressful on him, but that given the choice he'd rather ride around in a cart with us than sit by himself at the hotel for five hours, and also that once he gets accustomed to it, golf might be something he'll grow to enjoy. 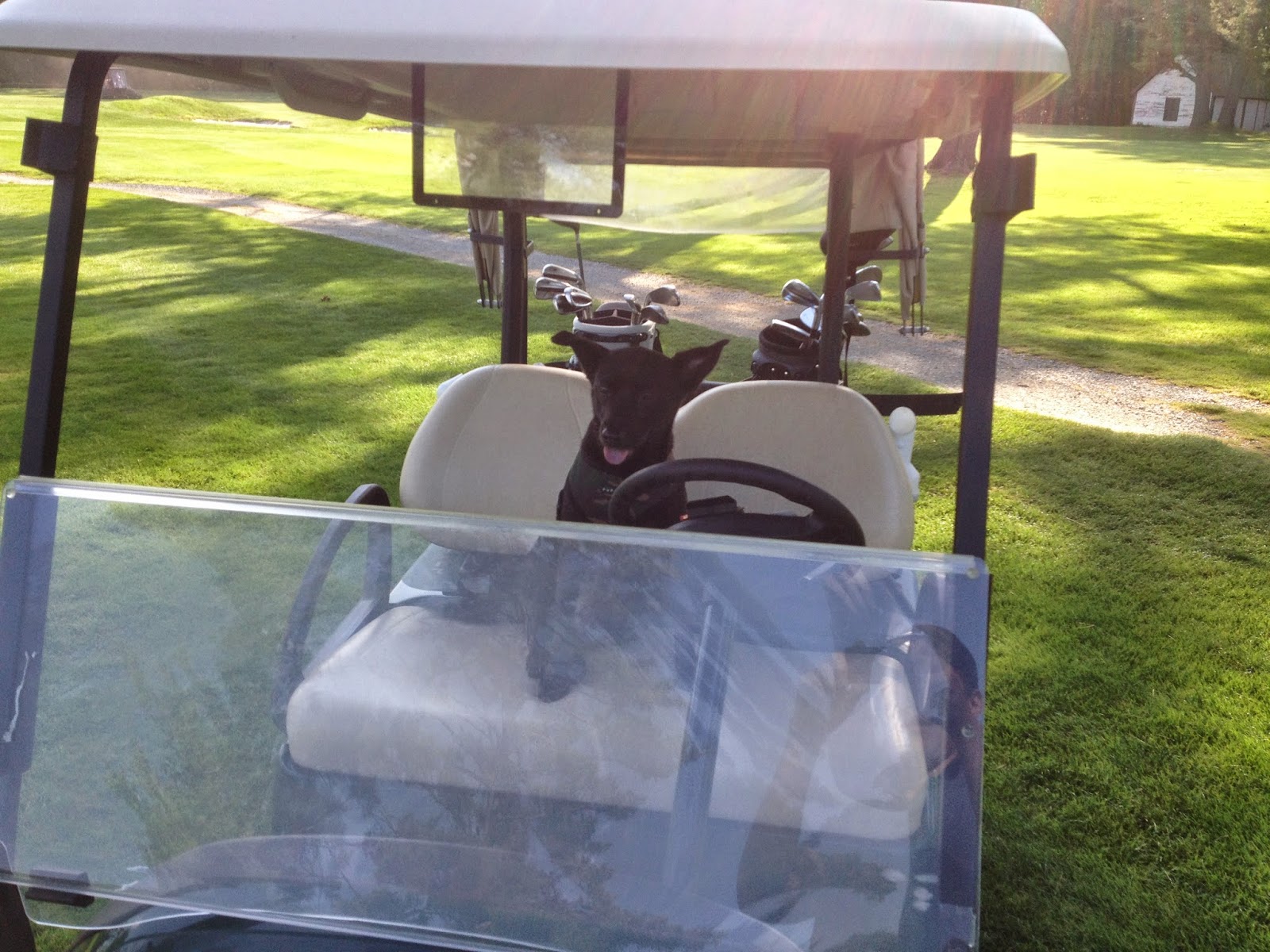 I tried my best not to show it but I was a little stressed for the first part of the round. (That's why there aren't many photos of the first few holes.) Ms. Legit is a fairly experienced novice golfer now so I don't need to worry about her game, but she also stressed about the emotional state of our third member. As the low handicap in the group I took it upon myself to try and maintain calm, to dole out the treats for good behavior and generally keep things moving along. Golf must be so confusing to a dog. 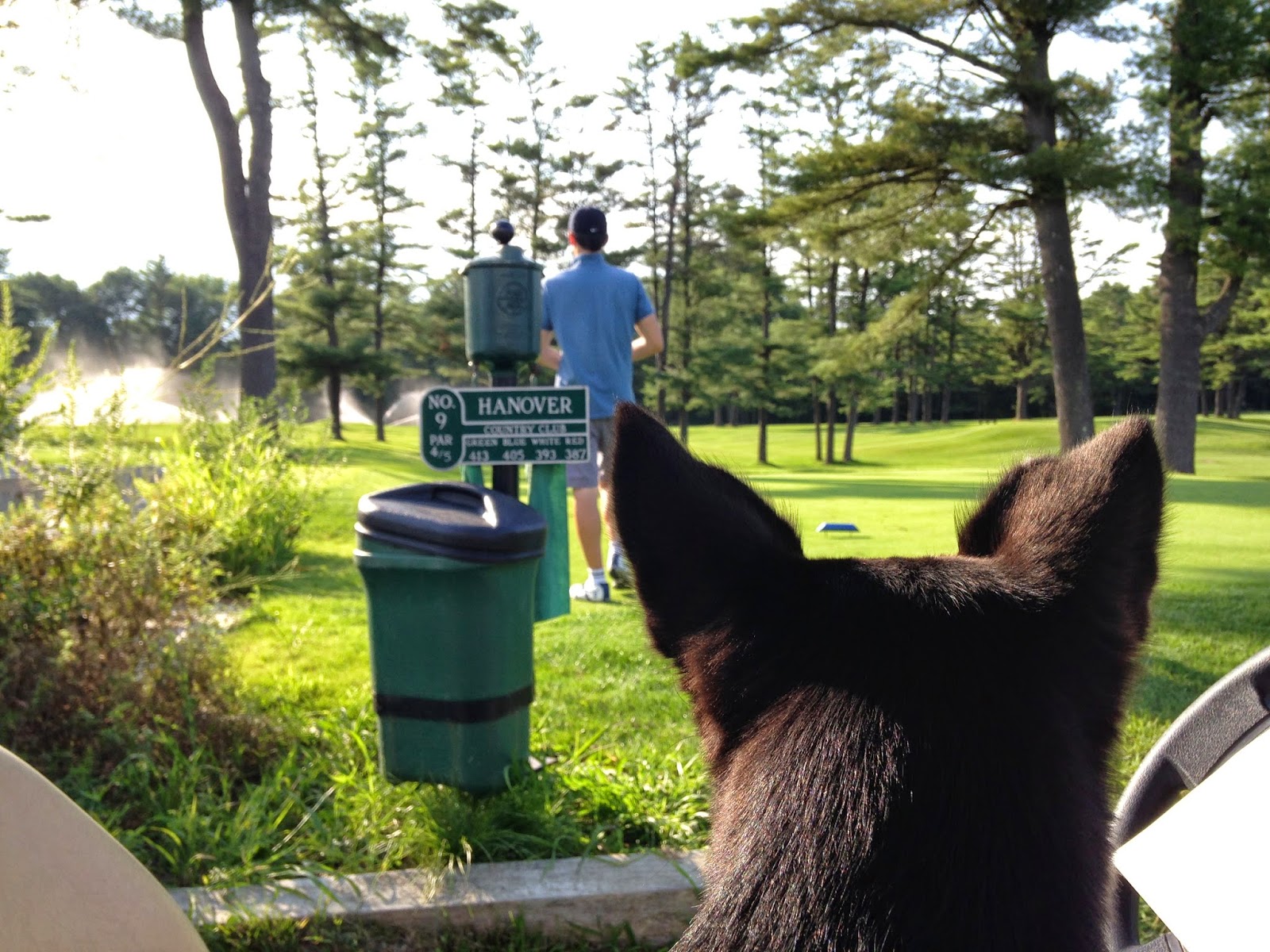 He was perfectly okay with riding in the cart, but when we would both have to leave to go putt he would start to hyperventilate a little. As we were on this somewhat proper, Ivy League course it made me nervous the thought of anybody being bothered by his nervous yips. But he more or less settled into the situation about six holes in. He slurped water from the little paper cone-cups. Long as the both of us didn't get too far from the cart, he managed to keep his shit together just well enough. 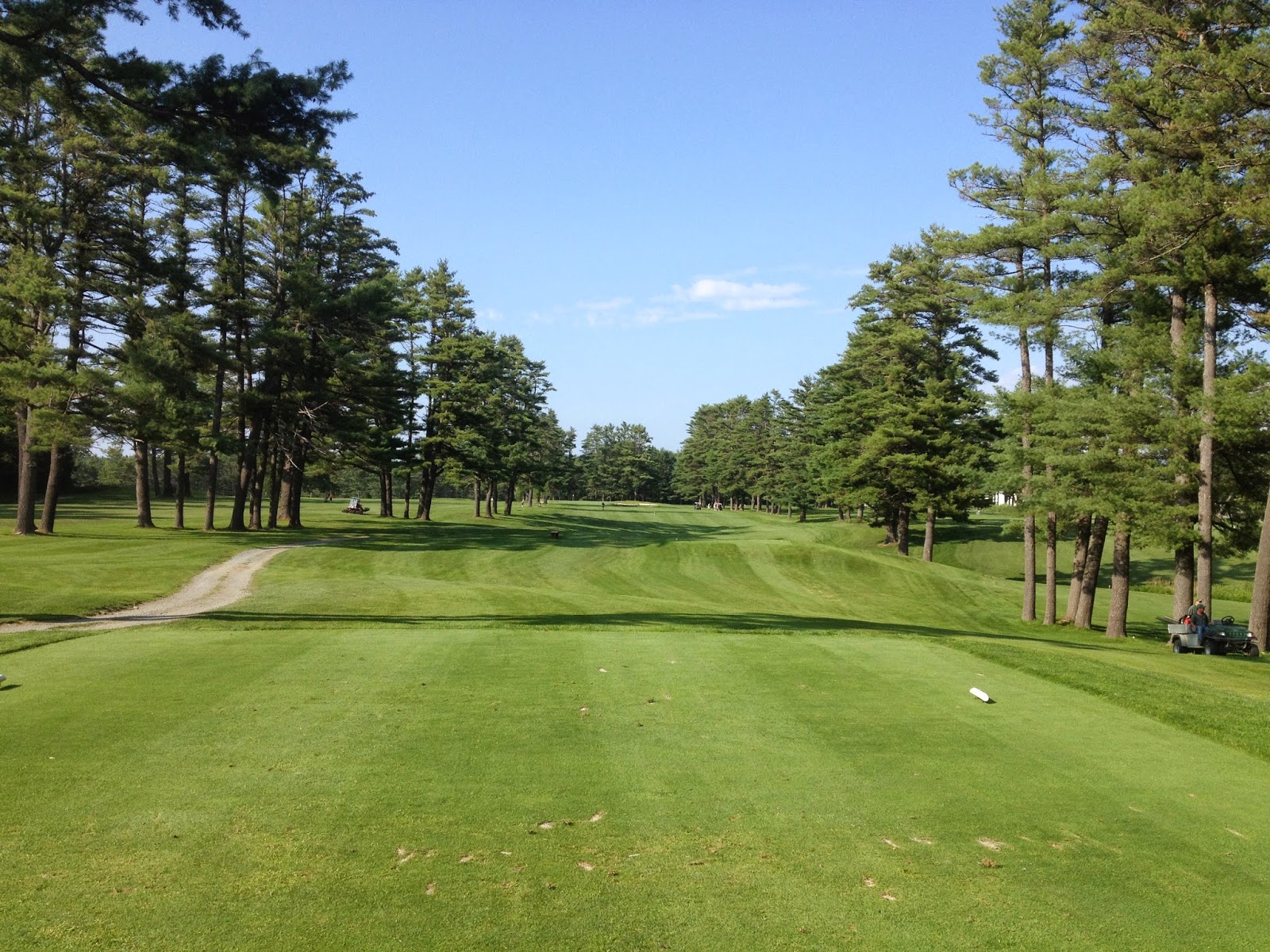 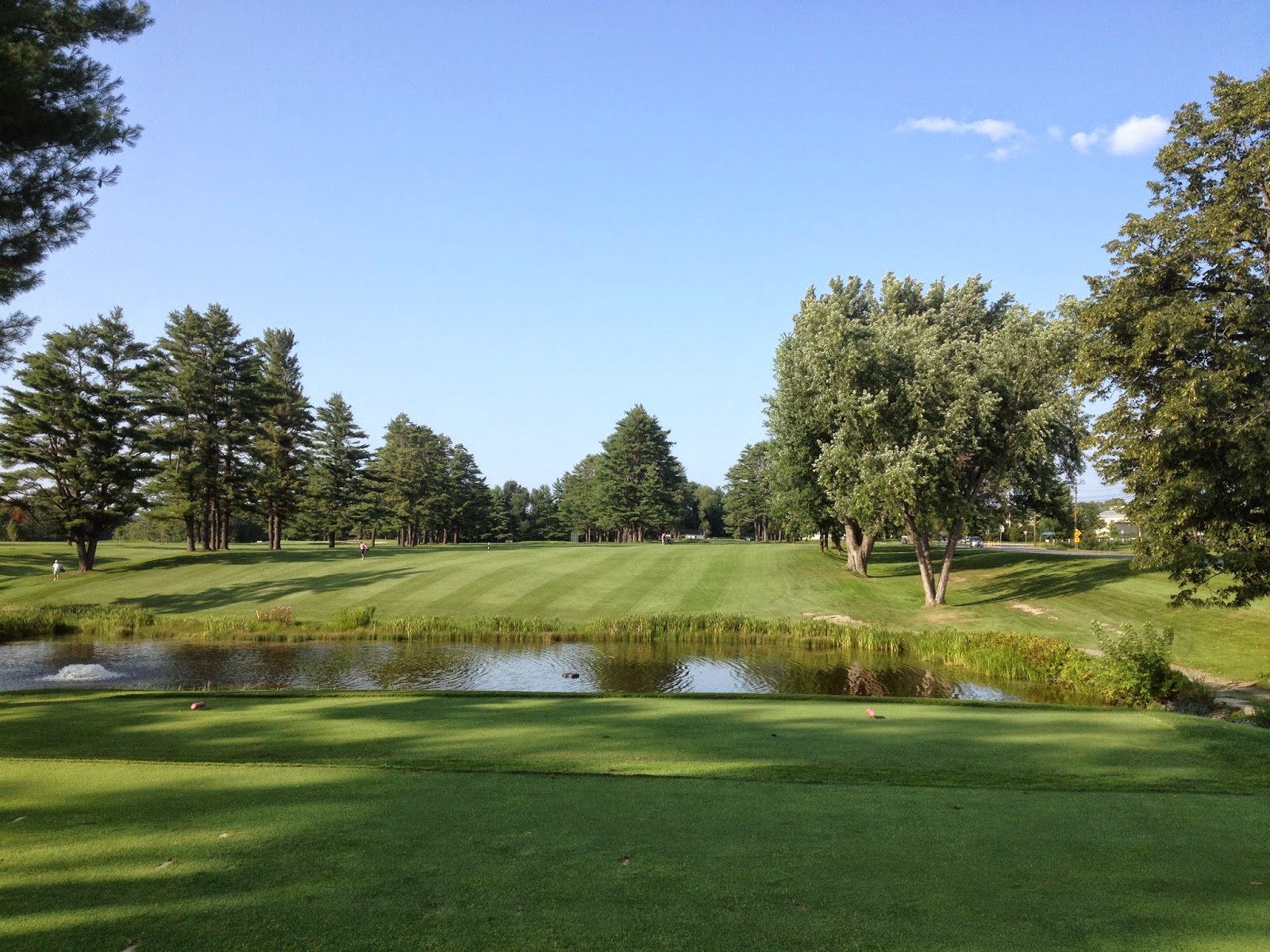 Hanover is a rather classic tree-lined course with Ross-style elevated greens. 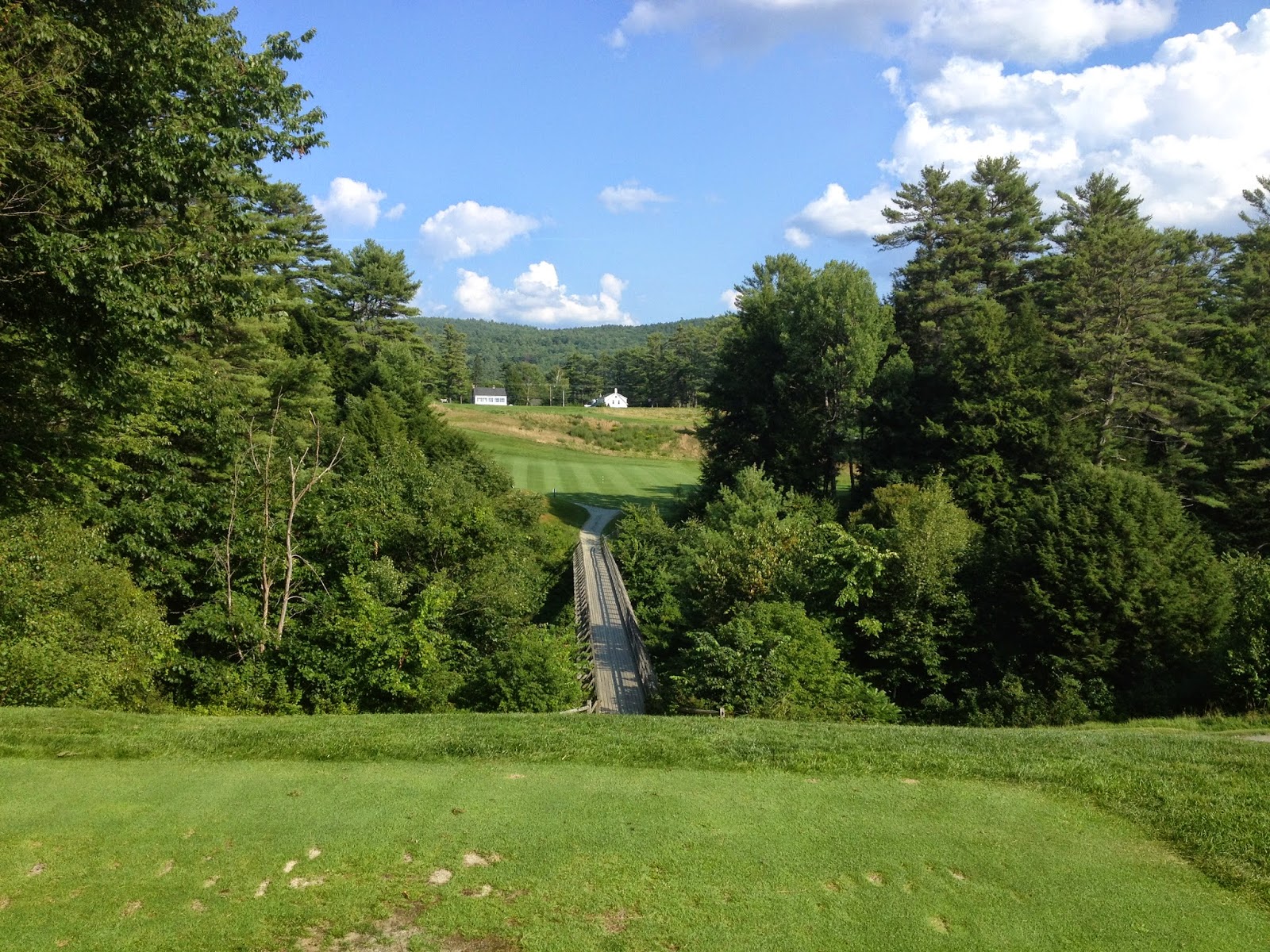 Lots of varied terrain and elevation. This tee shot is a white-knuckler. 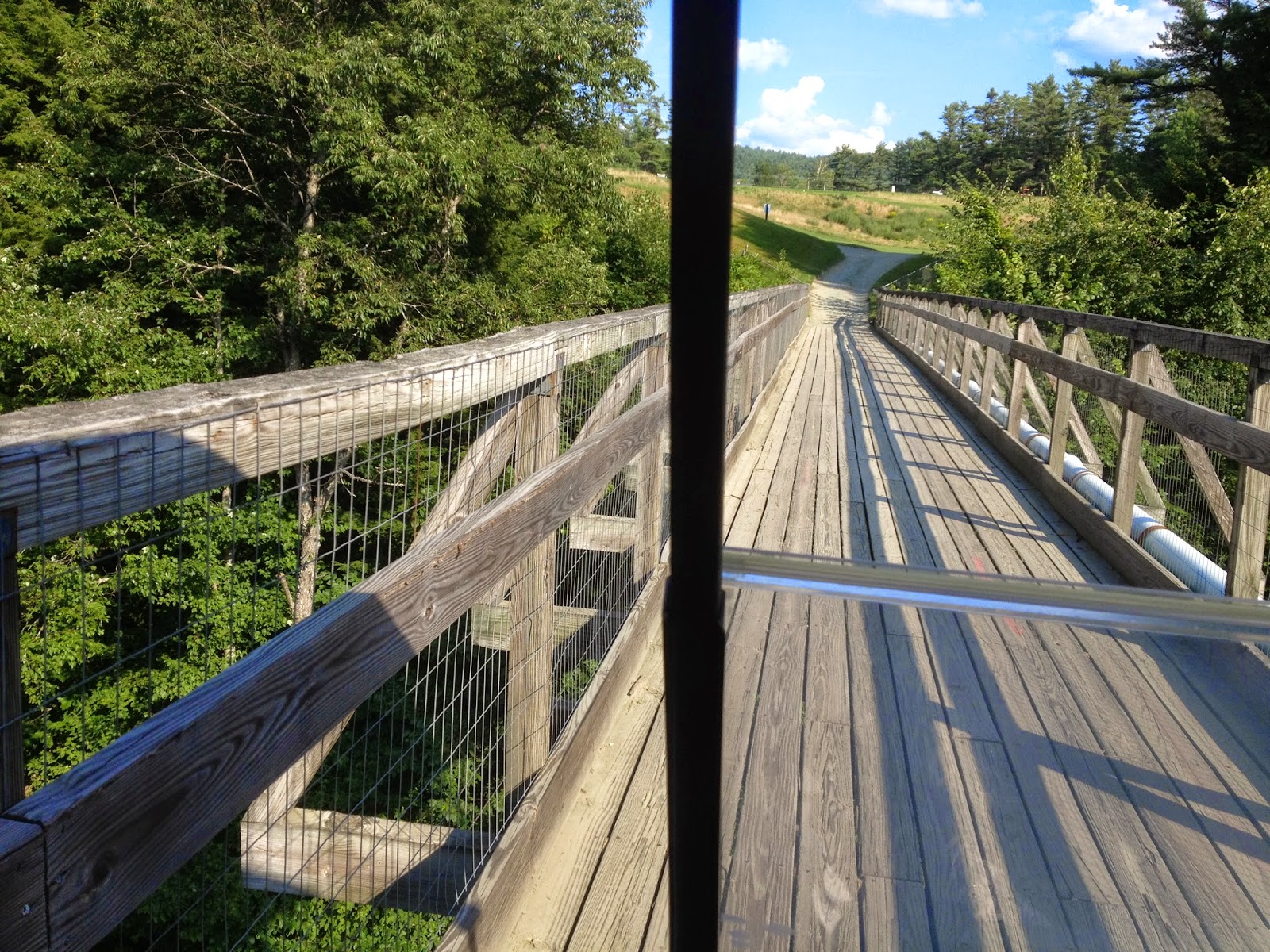 The gorge is deep enough... 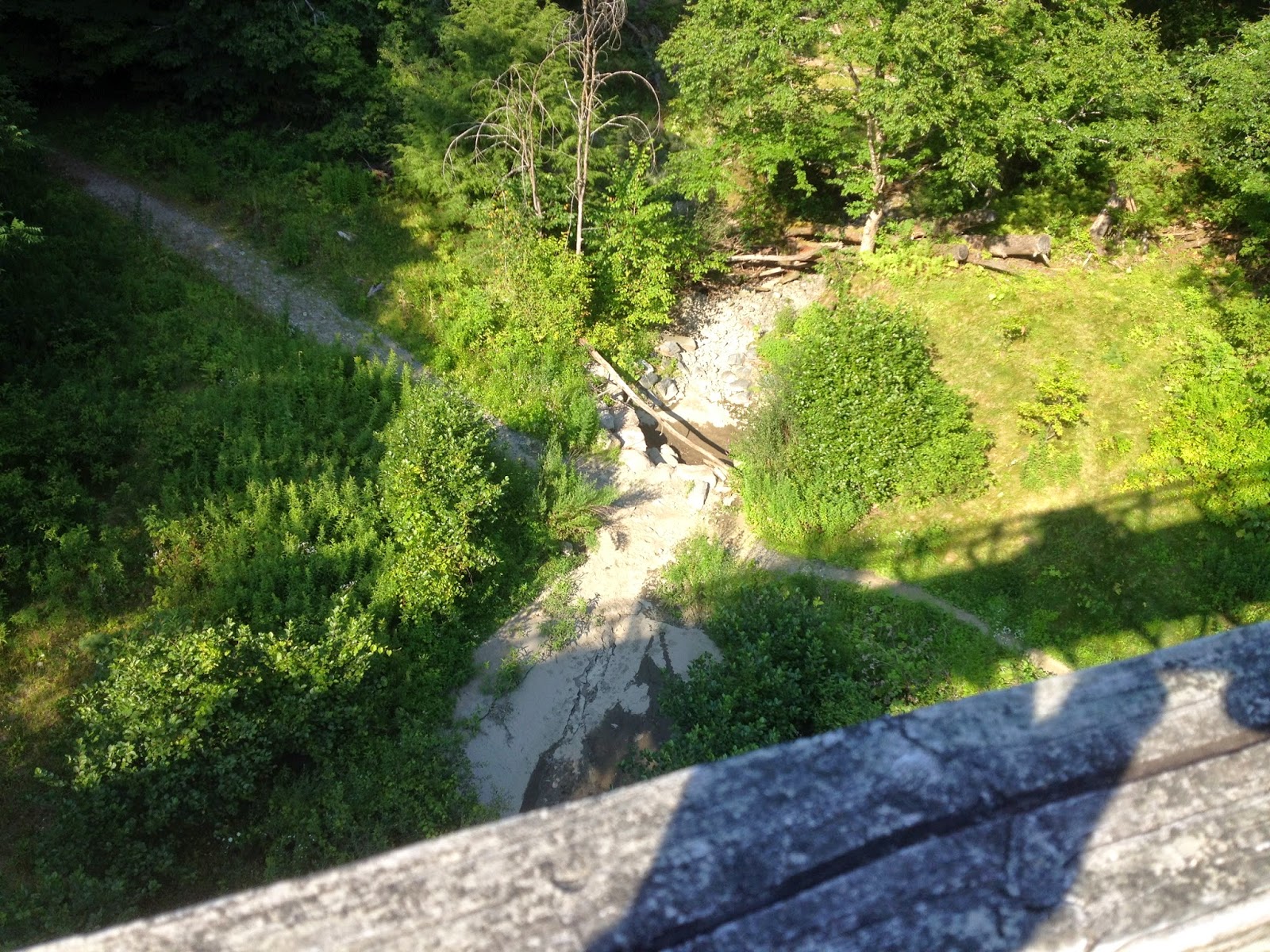 ...and the bridge is skinny enough to give you the willies. 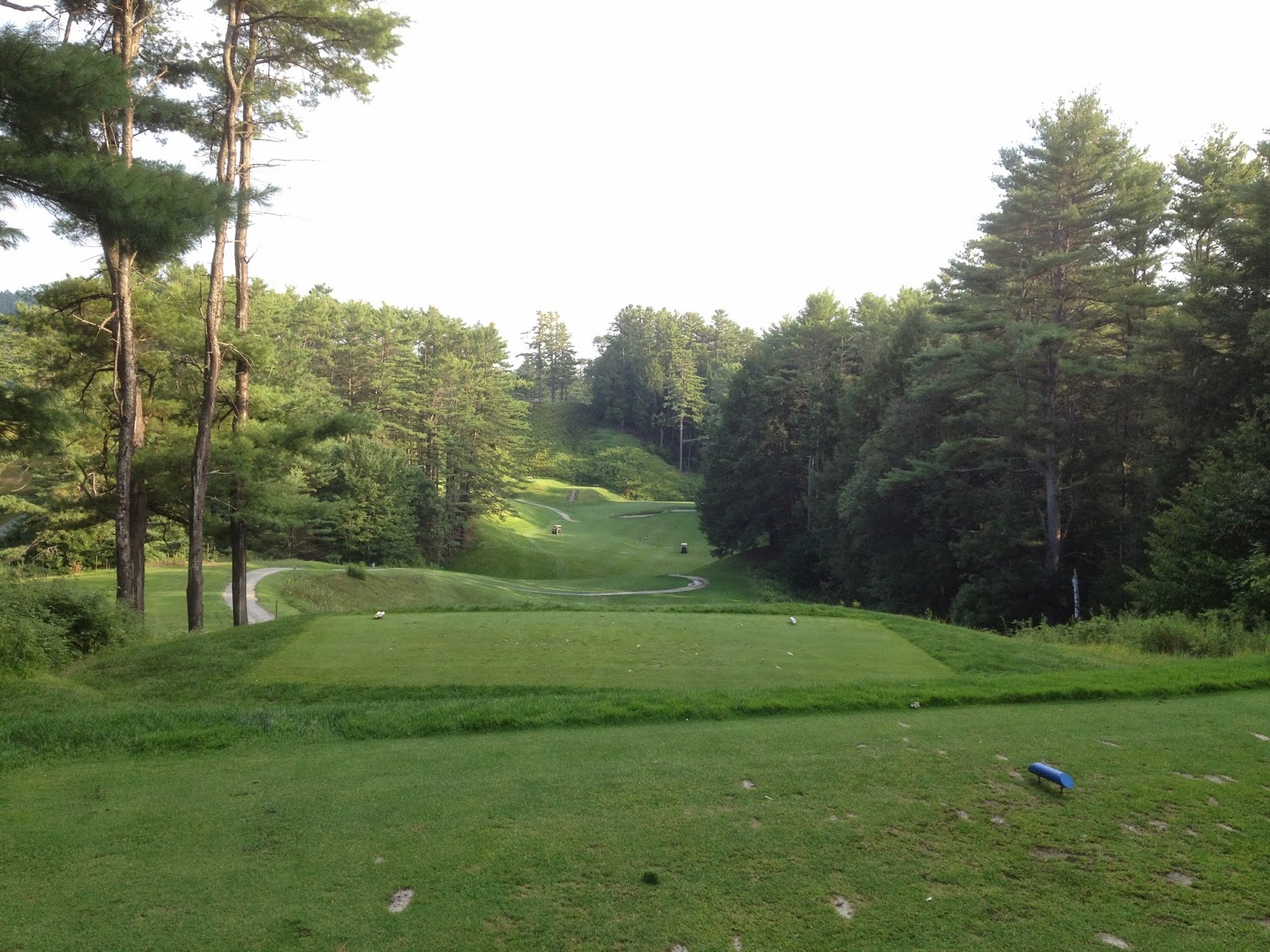 I was fortunate to keep out of trouble all day, but there is a decent amount of it here. I also sweated this tight tee shot at the 13th. In such situations I think it is best to pick a line and then just try to whack the stuffing out of the ball, i.e. channel your fear into a kind of raw, vindictive rage, like a cornered animal. 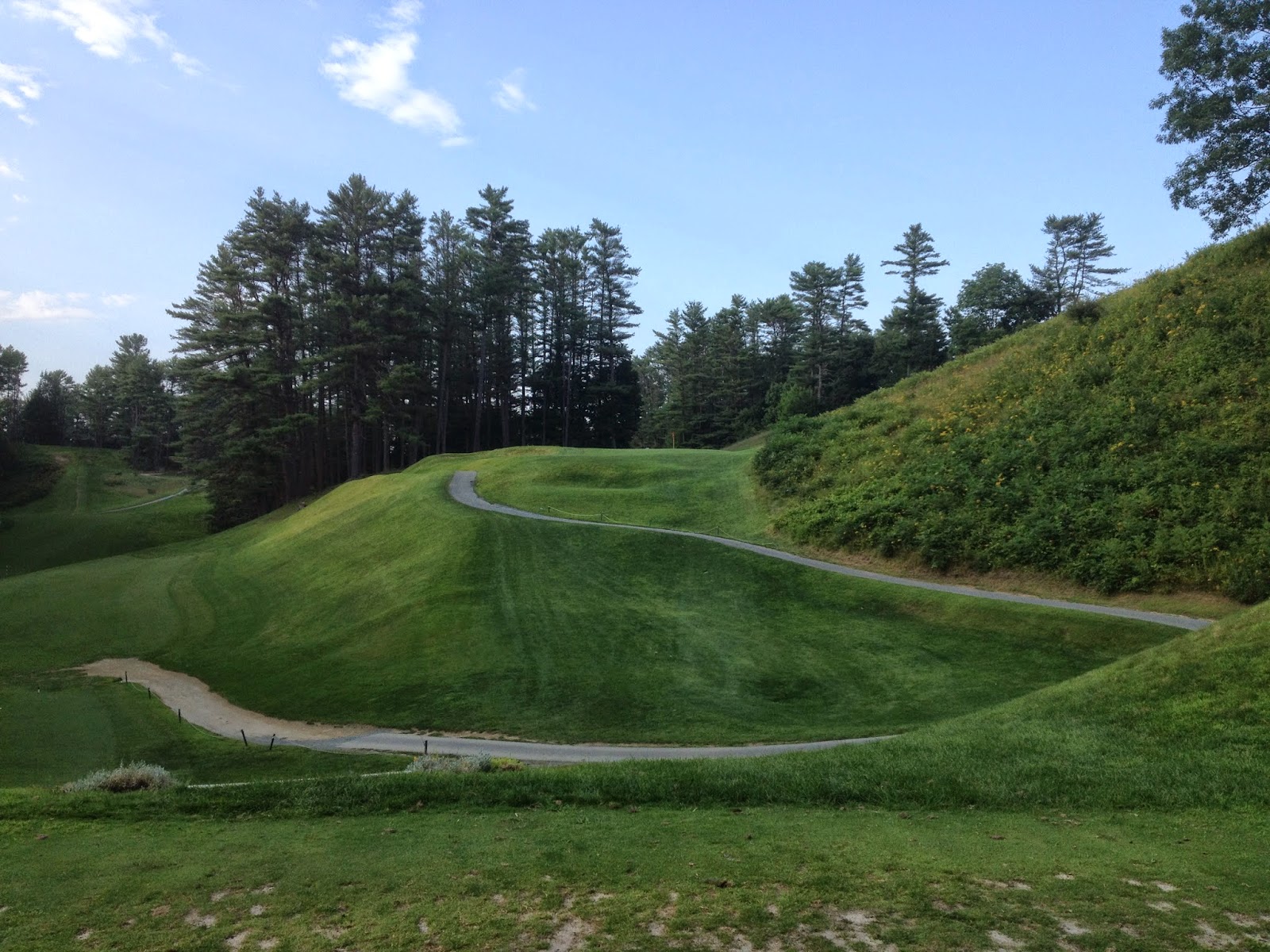 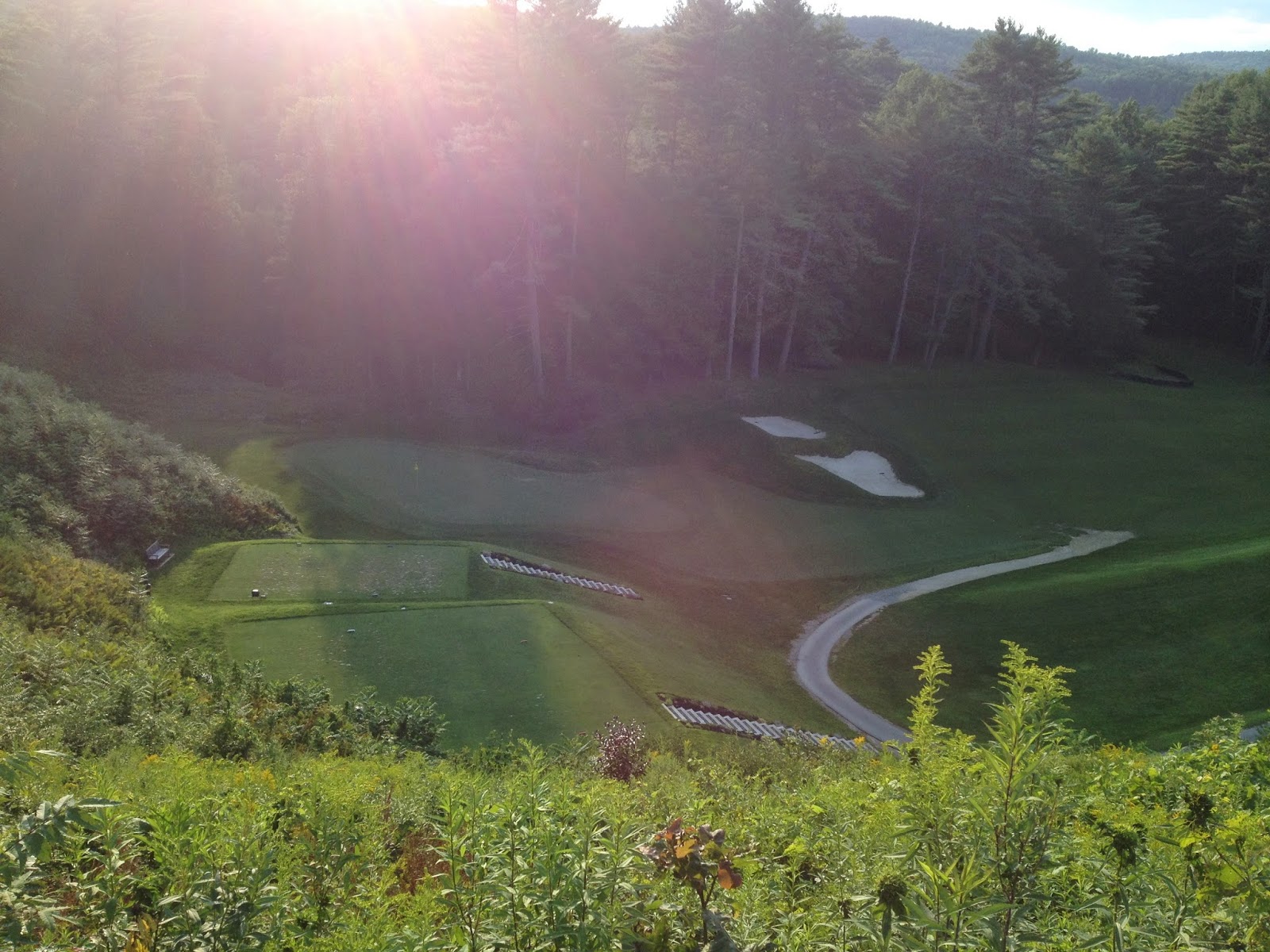 Coming down the stretch I had a vague notion that a good round was in the works; really though I just tried to shut it all out. Things got a little bit hectic on the last holes. The 17th is one of the strangest setups I've ever seen. It's a par 5 for me, but a par 3 for the ladies, which meant hitting my tee shot, driving through a wooded, serpentine trail to drop the lady off some 300 yards away at the red tee, then looping back around to somehow locate my ball. (Should've done it the other way around, duh.) It was a wild goose chase. The cartpath was bumpy, pedal was to the metal and Ringo almost flew out at one point; I ended up having to attempt a three-point turn on a narrow cart path and just barely had room to pull it off. All that and I had to then hit a layup across a deep ravine. Plus the twosome behind was waiting on the tee. From a 5-wood distance away I waved arms wildly, in a way that was meant to simultaneously convey "Sorry!", "I'm new here!", and "Dammit, this hole is confusing."

On the last tee a pair of cheery older guys drove up and asked if they could join up, as the sun was about to set. If this was back at home, I probably would have begrudged them for even asking but since I was the guest here I swallowed it and said, "Sure!" all chipper. They were extremely friendly to us, and quite curious about the tourist couple from the city playing golf with a dog riding-bitch in the cart. 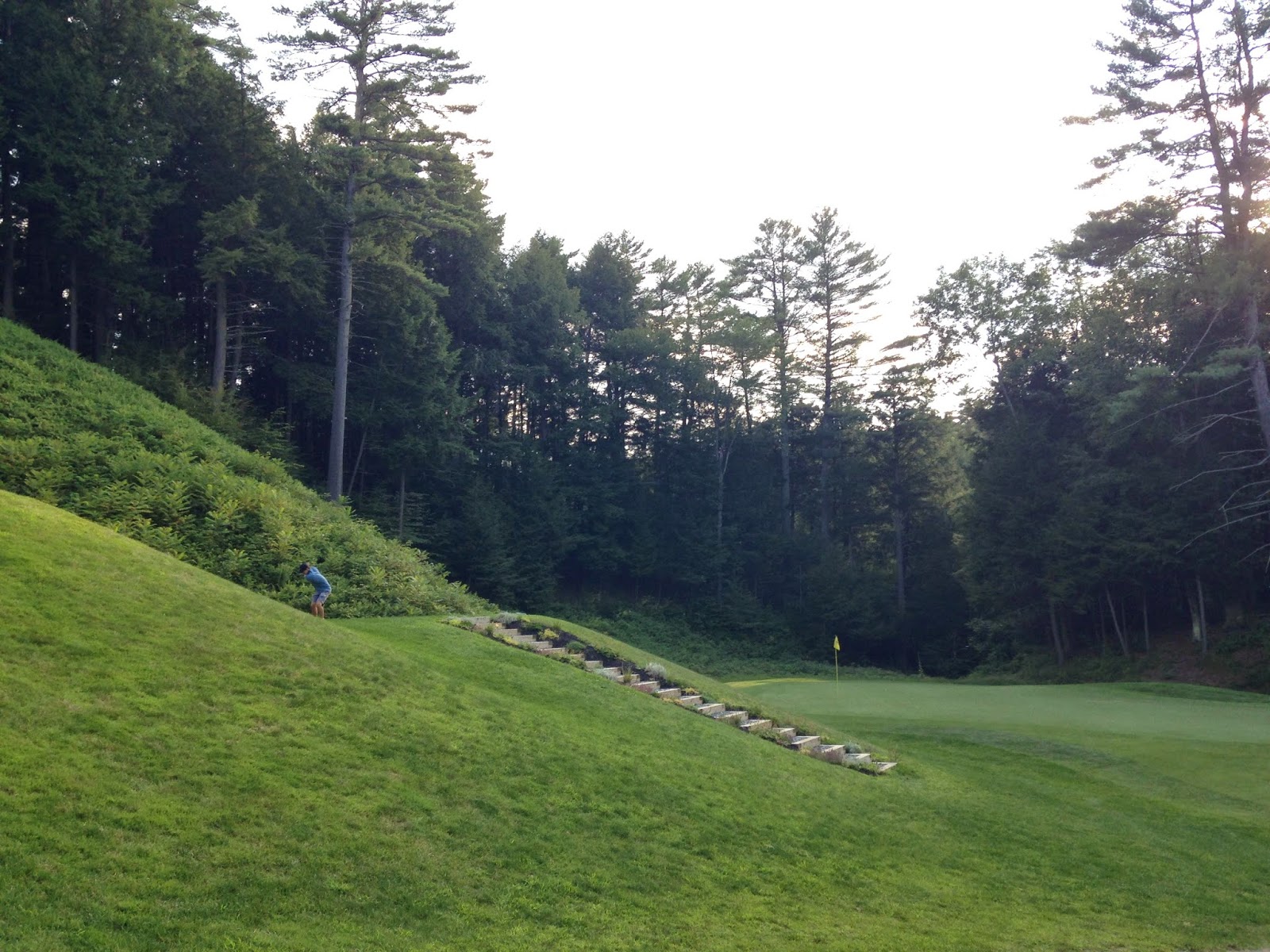 I rush-bogeyed those final holes, ending the round on kind of a bum note. At the car in the parking lot I added up the score. I couldn't believe the sum so I had Ms. L double check it.

Recently I had set a goal of breaking 80 before summer ended. I could not have expected it to happen in a situation like this--on the road, unfamiliar track, not an easy one, all while trying to keep our doggy companion from having an emotional meltdown. I had no forethoughts about the round going into it, no game plan, no projections, no expectations whatsoever. (Probably I was just hoping we could all get through this without any freakouts.) I suppose that given the situation there was no choice but to stay in the moment. Which may be something I should try to emulate from now on. 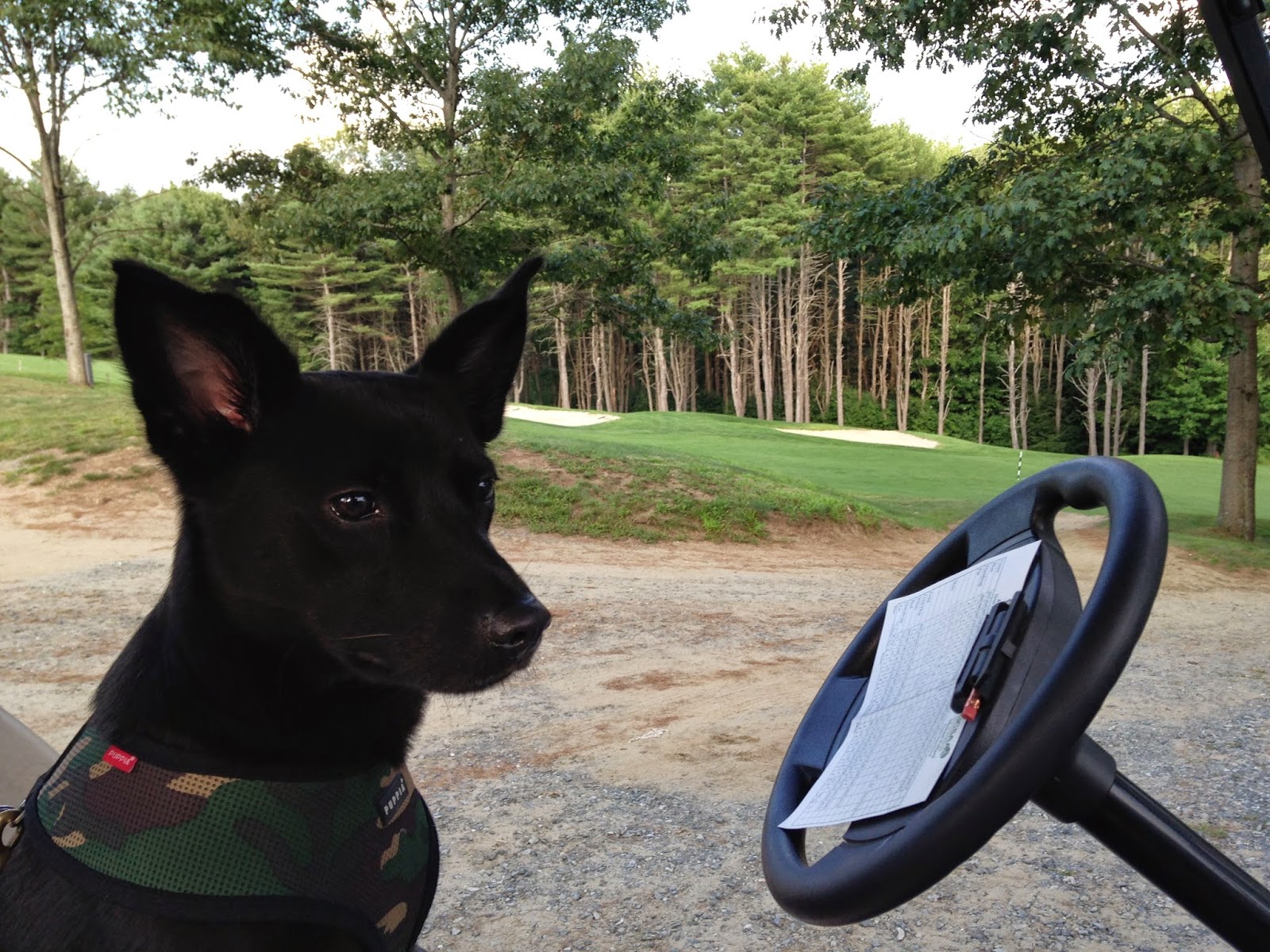 Looking back it was also kind of a crazy afternoon in which a lot went my way. On the fifth hole I chipped up to an elevated, short-side pin and holed out. On the 10th I skulled a simple approach clear over the green to a couple inches of the OB line. On the next hole I somehow scrambled for par chipping off an extreme sidehill lie with the ball sitting up around chin level. Later on I hit into some snarly veg and nearly lost the ball again, and managed to extricate it with a big swing to save a bogey. Plus there were a couple of luck bounces that put me within birdie range. 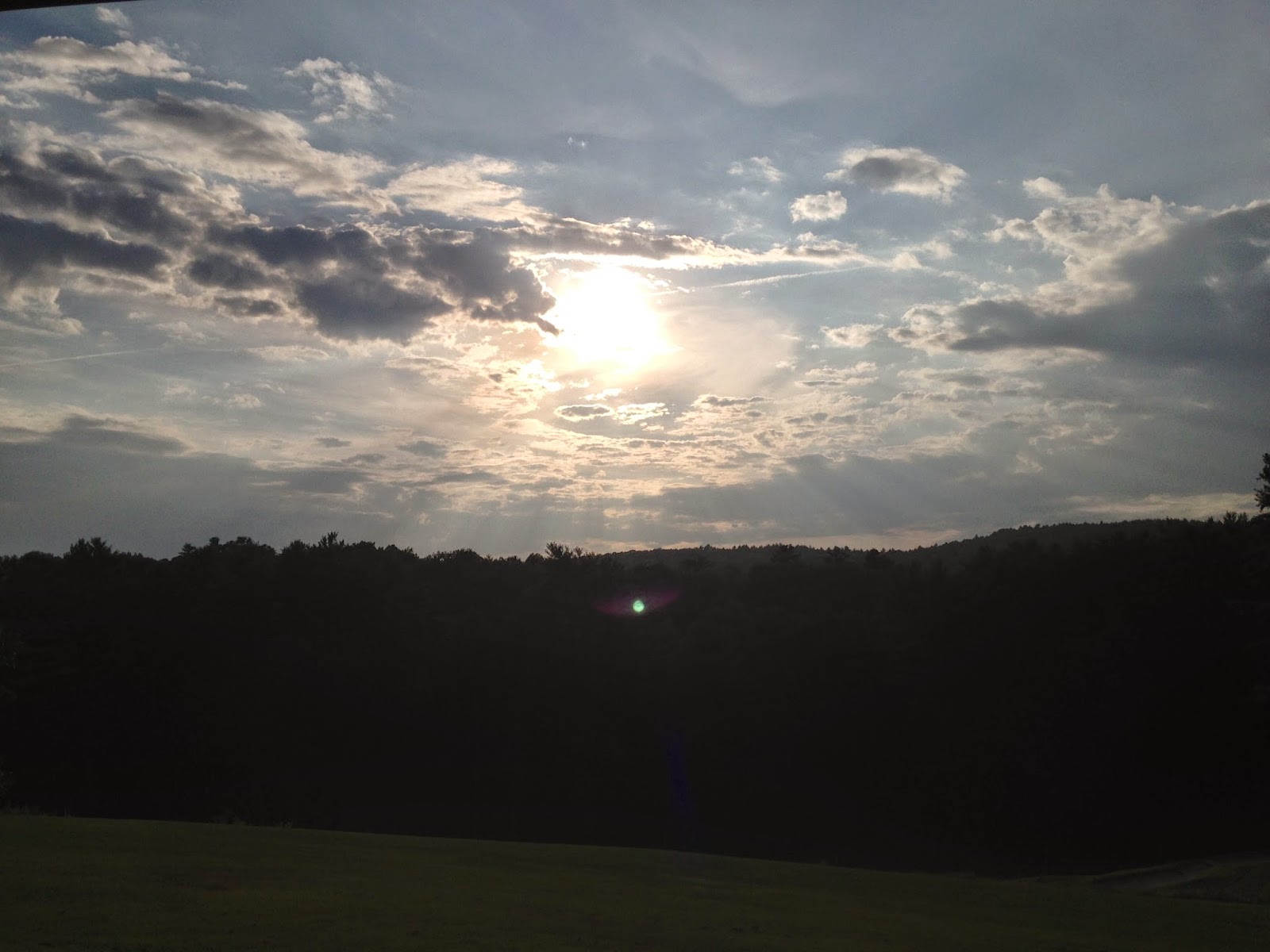 I'd like to say this is a big confidence booster and everything but I need to be realistic. I putted like a god. I made four birdies. Other than that I kind of scraped it around, left several easy strokes out there. It might be nice to think I can toss together a sub-80 round in the spur of a moment, no warmup range balls, no practice putt, not so much as a basic toe-touch stretch beforehand. If I buy into that however, I might spiral into complacency yet again. I'll have to think of a new goal. For now I'll just be glad to have had a fun time on the course with two of my favorite people in the world.
Posted by Legitimate Golf at 10:09 AM