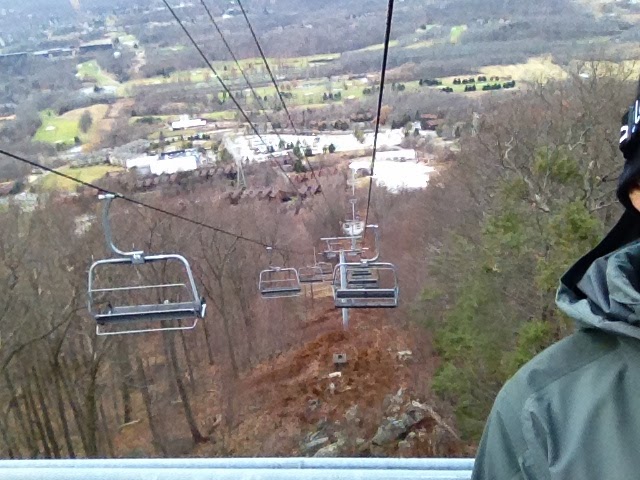 It's probably time to call off this whole season end watch. I went snowboarding in the local NJ mountains this past week; I was riding the chairlift and when I turned around to look back down at the green earth I saw the Great Gorge Country Club sitting just beyond the base of the ski area, all verdant and ready to go. It occurred to me that this winter golf season is going to roll right on into 2014. Not ruling out any future calamities of course but for the foreseeable, cold temperatures are our only adversaries around here.

You know what, I'm feeling pretty good right now about both the weather and the state of my game, so how's about throwing down a little challenge. 2013 for me will go down as an especially eventful and memorable year but let's face it, it was a little thin on good scoring. I shot an 18-hole score in the 70s exactly once (and barely did it, needing a 8' par putt on the last), and this represents a noticeable regression from previous years.

So here's my lofty goal for the remainder of 2013. I'm going to try and beat my previous low 18-hole score of 79. I realize that the temps are going to be cold, probably sub-40 with windchill, but take heart me son--it has been done before. No pansy winter rules either by the way--straight up RoG.

The forecast for the next couple of days as I write this calls for conditions that I'd describe as "winter-optimal": highs of around 40°F, with windchills making it more like 30s. Right in that sweet spot in between damn-cold and too-cold, so I'm expecting some fast pace of play.

I haven't been practicing and a rusty short game usually winds up even more clunky and unfeeling when it gets cold, but lookout--my full swing feels better than it has all year. Last time out I saw some real promising ball-striking so believe me, I go into this with some bloated confidence. I know that I could easily fall short of my goal, shamefully short, and I accept that. With the days getting colder all the time who knows exactly how difficult the conditions are out there right now. If I do bungle this challenge, get off my back--at least I went out on a limb and there's one thing I've learned about blogging is that people like to read about you going out on a limb.

I think I can give myself at least a couple more chances before Jan. 1, and I'll probably split them between Dyker Beach--a very familiar course on which I've shot plenty low winter scores--and Silver Lake, a course I only first saw a couple months ago, and where my current low mark is 85. I know the odds are probably against me, and also that I'm putting undue pressure on myself. But hey, why not? It's been a while since I've gone out there and played with a kamikaze rage.